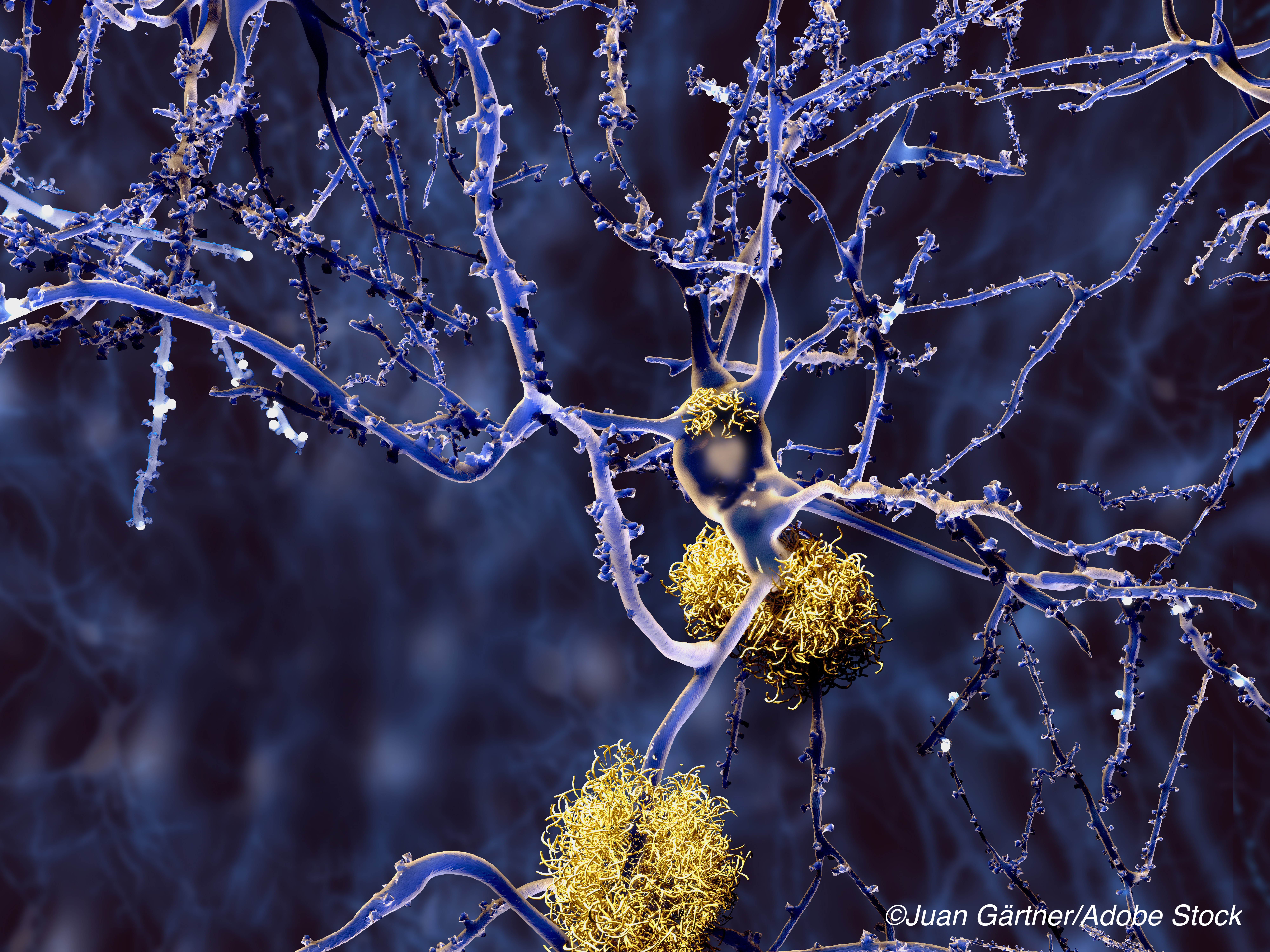 An investigational monoclonal antibody that targets N3pG, a modified form of beta-amyloid plaque, demonstrated efficacy in early results first reported at the Alzheimer’s Association’s International Congress and reported in an article published July 32, 2021. Click here to view the original version and to obtain CME/CE credit for the activity.

The novel agent, donanemab, is a monoclonal antibody that targets N3pG, a modified form of beta-amyloid plaque.

In a presentation at the Alzheimer’s Association’s International Conference, Mark Mintun, MD, vice president of Alzheimer’s disease development for Eli Lilly, Indianapolis, reported exploratory analyses from the TrailBLAZER-ALZ trial, which found that compared with baseline measurements, donanemab administered every 4 weeks for 76 weeks achieved a 24% reduction in P-tau217 versus a 6% increase of P-tau217 in the placebo group, reflecting an overall 29% difference with donanemab (P<0.0001), he said in a late-breaker session on developing therapeutics.

In findings published in JAMA and reported at the 2020 AAIC meeting, researchers reported that “plasma P-tau217 discriminated AD from other neurodegenerative diseases, with significantly higher accuracy than established plasma- and MRI-based biomarkers, and its performance was not significantly different from key CSF- or PET-based measures.” The TrailBLAZER-ALZ findings now link that accuracy to clinical results.

He said that the decrease in P-tau217 correlated with reductions in amyloid plaque at 24 weeks and at 76 weeks (P<0.0001); was associated with less neurofibrillary tangles in the parietal lobe (P=0.031) and in the frontal lobe (P=0.0011); and was associated with a 28% decline in disease progression in the overall population (P<0.001). Additionally, persons with the so-called Alzheimer’s gene—apolipoprotein E4—achieved a 42% reduction in disease progression (P<0.001).

“Treatment with donanemab drives a rapid reduction of plasma P-tau217 detected within 12 weeks of treatment,” he reported.

In June 2021, the U.S. Food and Drug Administration granted Breakthrough Therapy designation for donanemab based on the phase II data. No additional safety analyses were performed related to the presentations.

“We are excited by these promising results, which provide further evidence on the potential for donanemab to slow disease progression for people with early symptomatic Alzheimer’s disease,” said Mintun. “Importantly, these data link the mechanism of action of donanemab, plaque clearance, with positive effects on both clinical outcomes and brain tau pathology.”

In commenting on the study, Maria Carrillo, PhD, Alzheimer’s Association chief science officer, told BreakingMED, “In the presentation, first reported at AAIC 2021, the researchers found decreasing levels of P-tau217 over time in study participants who received the drug.

“Phospho-tau217 is a robust plasma biomarker for Alzheimer’s disease. It is particularly good at distinguishing Alzheimer’s from other neurodegenerative diseases with high accuracy,” she said.

“These exciting new data continue to demonstrate that removing amyloid plaques can be an important element of effective Alzheimer’s treatment,” Carrillo added. “The data provide increasing confidence that removing amyloid plaques has a strong impact on reducing tau tangles—the other hallmark of Alzheimer’s brain change—and that this correlates with potential benefits to memory, thinking, and daily functioning. This is another piece of the puzzle linking changes in Alzheimer’s biomarkers, such as amyloid and tau—physical/biological markers that we can directly measure—to cognitive benefit.”

In the study, Mintun and colleagues enrolled 131 patients who were diagnosed with early Alzheimer’s disease and treated them at first with 700 mg of donanemab for 3 intravenous doses every 4 weeks. The dose was then titrated to 1,400 mg donanemab ever 4 weeks for the duration of the trial. If imaging abnormalities occurred within the first 3 doses, the titration was not performed. Another 126 patients were given placebo ever 4 weeks.

“This was a moderately-sized phase II trial,” Carrillo said. “We look forward to the results of a second phase II trial of this drug, which is currently recruiting at least 1,000 participants.”

Carrillo said that the results of the TRAILBLAZER-ALZ trial added to the science. “What we’re learning from recent studies is that amyloid reduction/removal is clearly related to tau deposition and clinical progression in Alzheimer’s,” she said. “It is not a hypothesis anymore. We’ve seen a maturation of this class of treatment, with solanezumab, aducanumab, donanemab, lecanemab and gantenerumab.

“We look forward to seeing more data on these compounds as they report over the next two years,” Carrillo said. “As the science evolves, we see evidence of this class of treatment having an important effect of amyloid clearance, which very importantly lowers tau tangles, and also demonstrates a reduction of clinical decline.

“That said, it is clear that anti-amyloid treatments are not the cure, and that their modest benefit will need to be augmented by other therapeutic approaches like anti-tau and anti-inflammation strategies,” Carrillo said. “All of these and many others are in development now and many are funded by the Alzheimer’s Association. These treatments, when discovered and approved, may then be combined into powerful combination therapies.”

The study was funded by Eli Lilly and Company.

Mintun is an employee of Eli Lilly and Company.

Carrillo disclosed no relationships with industry.