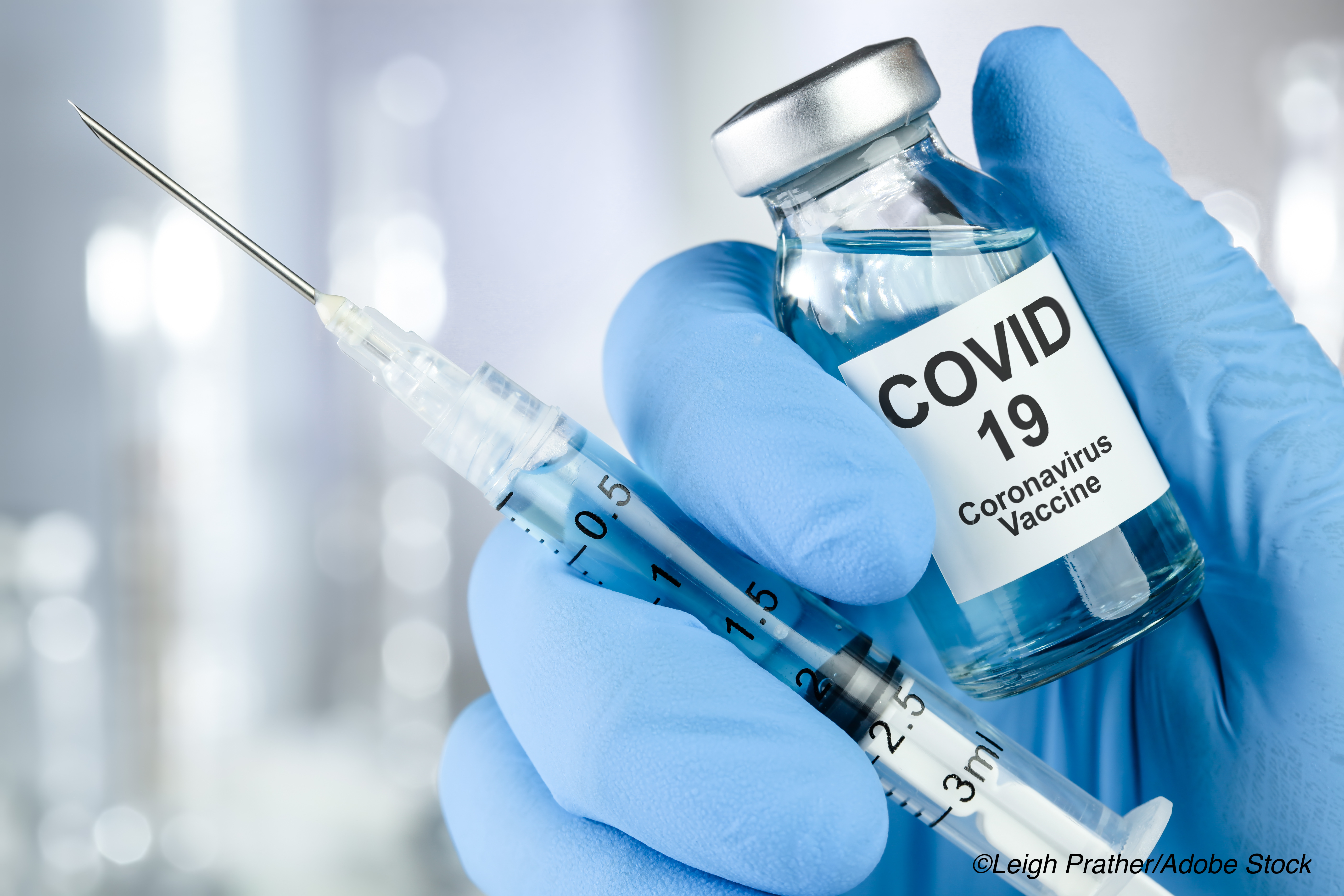 Patients with cancer have been particularly hard hit by the Covid-19 pandemic, both clinically with a higher infection risk and logistically with delays in care delivery. Several recent studies have taken a closer look at how SARS-CoV-2, and the vaccines against the virus, have impacted patients with cancer, particularly those with hematologic malignancies who underwent transplant therapy.

“As more transplant physicians are now resuming normal functioning of their transplant units, possibilities of absolute increase in the number of transplant patients getting infected with Covid-19 is expected to rise,” cautioned Kamal Kant Sahu, MD, and Ahmad Daniyal Siddiqui, MBBS, both of Saint Vincent Hospital in Worcester, Massachusetts, in a 2021 review. “While our understanding about Covid-19 has improved dramatically, a special population such as [hematopoietic stem cell transplant] patients remains at high risk and needs special attention.”

Patients who had hematogenic/hematopoietic stem cell transplant (HCT) or cellular therapy were at significant risk of increased mortality and morbidity due to Covid-19, according to Sibgha Gull Chaudhary, MD, of University of Kansas Medical Center in Kansas City, and co-authors in a publication-only study at the 2021 American Society of Clinical Oncology (ASCO) virtual meeting.

They conducted a systematic review and meta-analysis evaluating the outcomes of Covid-19 in HCT patients, settling on six studies with 1,619 patients (median age 63; 59% men), 646 of whom underwent HCT.

The authors reported that the median days for autologous HCT (autoHCT) was 690 days while it was 450 days for allogeneic HCT (alloHCT). The average follow-up duration after Covid-19 was 24 days.

“There is a need to prioritize HCT patients for Covid-19 vaccination, close surveillance, and aggressive management,” they concluded.

In another ASCO study, the same authors reported that patients who received HCT and CAR-T cell therapy were at an increased risk of moderate-to-severe Covid-19-related pneumonia, and a higher mortality rate with Covid-19.

Muhammad Umair Mushtaq, MD, from the Division of Hematologic Malignancies and Cellular Therapeutics, University of Kansas Medical Center, Kansas City, and co-authors conducted a prospective study of 40 patients (median age 58; 67.5% male) at their institution who were diagnosed with Covid-19 from April 2020 to January 2021. Of those, 25 underwent alloHCT with a median time since treatment of 12.4 months.

While the authors found that >42% of the patients in the study had mild-to-moderate Covid-19, nearly 63% had pneumonia, and that the mortality rate was 12.5% in all patients and 20% in alloHCT patients. They also reported that significant predictors of Covid-19 severity included alloHCT, concurrent immune suppression (65% of those with severe disease received this), and elevated inflammatory markers, such as a mean neutrophil-lymphocyte ratio of 19.7 in those with moderate-to-severe Covid-19.

Mushtaq and co-authors concluded that the “findings confirm the need for continuing vigilance with social distancing and masks,” and the results join data from other groups that offer similar conclusions: patients with hematologic malignancies undergoing HCT need special handling.

Researchers from the University of Michigan Rogel Cancer Center in Ann Arbor conducted a retrospective study of adult patients who received alloHCT or autoHCT and were subsequently diagnosed with moderate-to-severe Covid-19 infection between March and December 2020.

They found that the majority were either on immunosuppression or had significant comorbidities—most commonly diabetes and hypertension, according to a separate study from Brazil—and that all patients with chronic graft-versus-host disease (GVHD) required hospitalization. They advised that the potential “relationship between Covid-19 infection and GVHD development or exacerbation” needed more clarity.

A group from the Dana Farber Cancer Center in Boston reported that they had no cases of nosocomial Covid-19 infections in HCT or CAR-T patients at their single center, indicating that “these therapies can be safely administered during this [pandemic] period.” They also found that in alloHCT patients, “cryopreservation of unrelated donor products does not appear to negatively affect early clinical outcomes.”

However, they did have one patient with myelodysplastic syndrome (MDS) whose transplant was deferred and whose disease transformed to acute myeloid leukemia, “highlight[ing] the risk associated with delaying treatment of hematologic malignancies and the benefit of proceeding with definitive therapy during the pandemic, as long as appropriate safeguards are implemented.”

Akshay Sharma, MBBS, of St. Jude Children’s Research Hospital in Memphis, Tennessee, and co-authors conducted an observational study of cases reported to the Center for International Blood and Marrow Transplant Research, and found that recipients of autoHCT and alloHCT with Covid-19 had poor overall survival. “We found that in [alloHCT] recipients, age >50 years, male gender, and having received their transplantation within the last 12 months were all associated with worse survival,” Sharma explained to VJHemOnc at the 2021 Transplantation & Cellular Therapy (TCT) meeting.

The two-dose mRNA-based Covid-19 vaccine BNT162b2 was deemed to be “safe and achieve satisfactory serologic status in patients with cancer,” although the study authors noted that there “was a pronounced lag in antibody production compared with the rate in noncancer controls;” however, the second dose did lead to seroconversion.

The prospective-study cohort consisted of 232 patients (median age 68; 57% male) with solid tumors (27% gastrointestinal; 21% genitourinary; 18% breast) who got IV treatment administered at the infusional ambulatory unit of the oncology center, or inpatient service, at the Rambam Health Care Campus (RHCC) in Haifa, Israel. Nearly three-fourths of the patients had metastatic disease and >70% received immunotherapy or a biological agent. “Hematologic malignant neoplasms are treated in a different institution so these patients were not included in the study,” explained Irit Ben-Aharon, MD, PhD, of RHCC, and co-authors in JAMA Oncology.

Study enrollment and follow-up took place from January to March 2021. All patients were on active treatment and received both doses of the vaccine. They were age-matched with healthy healthcare workers (n=261) who formed the control group.

“Serum samples were collected after each vaccine dose and in cases of seronegativity,” and electronic health records “were reviewed for documentation of Covid-19 infection and results of blood cell counts, liver enzyme levels, and imaging studies,” according to Ben-Aharon’s group.

No Covid-19 cases were documented throughout the study period, but there were two cases in the patients immediately after the first dose. In the general U.S. population, a little over 10,000 post-vaccine “breakthrough infections” were reported by April 2021, according to the CDC.

For adverse events (AEs), 69% of the patients reported injection-site pain, followed by fatigue (24%). Also, elevation of liver enzyme levels >1.5 times from baseline levels was documented in 24 patients up to 6 weeks after the first vaccine dose, the authors reported, but the AE spontaneously resolved in 37% of those patients.

As to whether the specific type of cancer treatment had any role in seroconversion, Ben-Aharon’s group explained that patients “with breast cancer comprised 29% of the seronegative group, and 74% of these patients were treated with chemotherapy, and the treatments were diverse. Hence, we cannot assume that a specific class of drugs may hamper immunogenicity but rather that lymphosuppressive agents may induce a lack of effective seroconversion.”

Study limitations included the older population and the fact that cancer patients are generally more adherent to public health and safety measures. Finally, the study lacked a control group of unvaccinated patients.

During a January 2021 European Society of Medical Oncology (ESMO) roundtable, Ravindran Kanesvaran, MRCP, MD, of the National Cancer Centre Singapore, noted that “both the mRNA and adenoviral vaccines induce both humoral and cellular immunity, which might be a good thing thinking about this population of patients that is often older or has comorbidities. The immunogenicity data that we’ve seen on older trial participants is promising and it might also work on the slightly immunocompromised population. We don’t know the correlate of protection yet, so it’s hard for us to predict what type of immunosuppressive therapy would impact the vaccine efficacy.”

Ben-Aharon and co-authors pointed out that “[a]lthough the immunogenicity pattern was gradual and slower than in the noncancer population, after the second dose most patients were seropositive… Our study lends credence to the widely adopted recommendation to prioritize patients with cancer for SARS-CoV-2 vaccination.”

But many cancer patients have expressed vaccine hesitancy. For instance, a June 2021 survey-based study in Mexican breast cancer patients reported that over a third were uncertain about vaccination, while more than a fourth said they wanted to see the vaccine’s AEs in others, and 4% said they would only take the jab if it became mandatory. The study authors called for the “active participation of oncologists…to educate cancer patients on the benefits of Covid-19 immunization and to endorse vaccination.”

It’s a message that cancer care specialists have been driving home. “Health experts and federal agencies like the CDC all agree Covid vaccination is especially important for people with cancer. Even if the vaccine might be a little bit less effective in someone who is undergoing cancer treatment it’s actually even more important to take that vaccine,” noted Welela Tereffe, MD, chief medical executive, of the MD Anderson Cancer Center in Houston.

In the same YouTube video, David Tweardy, MD, also of MD Anderson, emphasized that “it’ll be important” for cancer patients to “work with your doctors to decide when to receive the vaccine in relation to when you’re receiving chemotherapy or other treatments for your cancer.”

ESMO President Solange Peters, MD, PhD, of the Centre Hospitalier Universitaire Vaudois in Lausanne, Switzerland, suggested that “all patients under chemo, under immuno-oncology, under hormone therapy, under antibody therapy should be vaccinated. Some of my colleagues would say, ’If you can avoid giving the vaccine on the day of high-dose cancer therapy, it might be preferable’ but even if you have to do that—do that. That is my main message, for the time being we shouldn’t compromise this [Covid-19] protection.”

The study by Ben-Aharon’s group was supported by the Israel Cancer Research Fund.

Ben-Aharon reported no relationships relevant to the contents of this paper to disclose. A co-author reported a relationship with Pfizer.