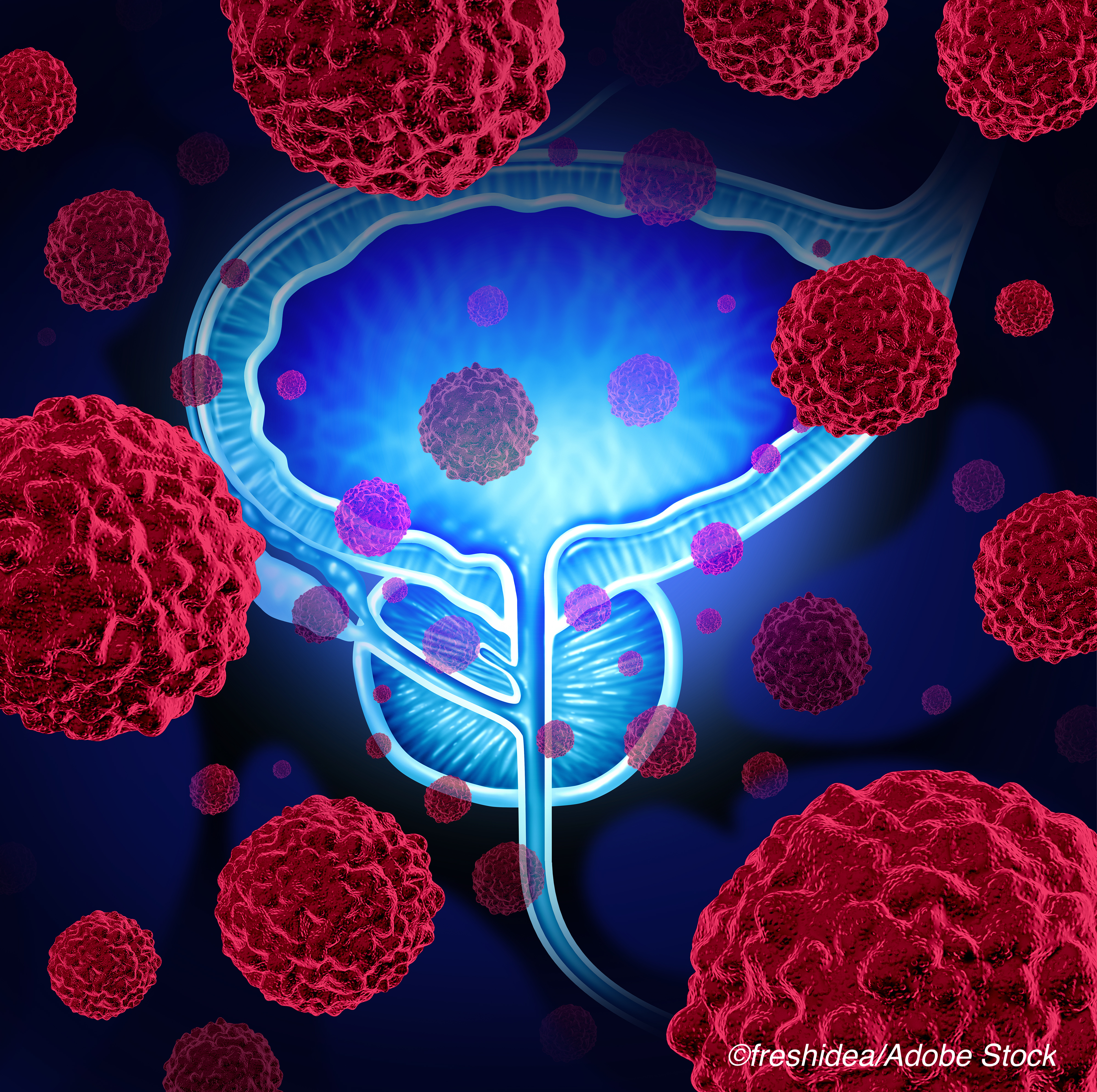 Choice of bone-targeted agent does not affect survival benefit

The retrospective study looked at the outcomes in men who received either zoledronic acid or denosumab plus abiraterone acetate and prednisone and found that median OS was significantly longer—31.8 months versus 23.0 months, hazard ratio 0.65 (95% CI, o.54-0.79) P<0.001), wrote Edoardo Francini, MD, PhD, University of Florence, Florence, Italy, and colleagues in JAMA Network Open.

The analysis included 745 patients (all of whom had mCRPC) with bone metastases.

Inexplicably, however, time to the first skeletal-related event (SRE) in the overall cohort was 27% shorter among men treated with additional BRI therapy at a median of 32.4 months compared with a median of 42.7 months in abiraterone acetate/prednisone alone patients at a HR of 1.27 (95% CI, 1.00-1.60; P=0.04), Francini and colleagues observed.

“This large international cohort study is the first, to our knowledge, to evaluate the clinical impact associated with the addition of BRIs to abiraterone acetate with prednisone as first-line therapy for the treatment of patients with mCRPC and bone metastases,” the authors wrote.

“Although these findings are not generalizable, they provide real-world data in favor of the addition of BRIs to abiraterone acetate with prednisone as first-line therapy for patients with mCRPC and bone metastases and they support the international guideline recommendation of using BRIs in this disease setting.”

Clinical and electronic registries from 8 participating hospitals were queried to identify a cohort of patients with confirmed mCRPC who were treated with first-line abiraterone acetate and prednisone between January, 2013 and December, 2016.

Patients who had received any treatment for mCRPC prior to the initiation of abiraterone acetate with prednisone were excluded from the study as were men who had experienced a prior SRT.

For the study, an SRE was defined as the need for palliative local therapy to bone, pathological fracture or spinal cord compression.

“Patients were categorized into 2 cohorts based on the receipt or nonreceipt of concomitant BRIs,” the authors noted.

“The primary end point of the study was OS…[while t]he secondary end point was time to first SRE,” investigators observed.

The median age of the cohort was 77.6 years (interquartile range (IQR), 68.1-83.6 years) and 71% of men were treated with abiraterone acetate with prednisone alone while only 29% of patients received additional BRIs.

Importantly for the generalizability of the results, 93.8% of the cohort was White.

Over half of the cohort at 56.4% had high-volume disease while 37% had low-volume disease and more patients at 61% received denosumab than those who received zoledronic acid at 38.9%.

This finding was consistent with outcomes observed in the univariable model, as investigators emphasized.

“The type of BRI (denosumab vs zoledronic acid) received was not associated with OS,” they again noted.

In contrast, results varied not only for OS but for time to first SRE depending on the volume of disease being treated.

“In contrast, there was no difference in median OS among those with low-volume disease, regardless of whether they received concurrent BRIs,” the authors added—at a median of 31.8 months in the BRI cohort compared with a median of 33 months in the abiraterone acetate/prednisone alone cohort, a difference between the 2 groups which was not significant.

The “detrimental consequences” of men in the overall cohort who received a concurrent BRI on the median time to first SRE was most notable in men with low-volume disease among whom there was a greater than 2-fold risk of experiencing an SRE compared with those who did not receive a BRI, at a HR of 2.29 (95% CI, 1.57-3.35; P<0.001).

Again in contrast, patients with high-volume disease treated with an additional BRI experienced a 30% delay in the median time to first SRE compared with those in the abiraterone acetate/prednisone alone cohort, at a HR of 0.70 (95% CI, 0.48-1.03; P=0.07), Francini and colleagues observed, even though this association was not statistically significant.

Commenting on the findings, Samuel Takvorian MD, and Naomi Haas, MD, both from the Perelman School of Medicine, University of Pennsylvania, Philadelphia, pointed out that international guidelines endorse the use of either zoledronic acid or denosumab for the treatment of men with mCRPC and bone metastases even though neither agent has been shown to confer an OS benefit in any randomized study to date.

Moreover, studies evaluating the efficacy of both BRIs in men with mCRPC were carried out prior to the approval of contemporary treatments for mCRPC including abiraterone acetate.

“Thus, the benefits of zoledronic acid and denosumab in combination with contemporary drugs for the treatment of mCRPC remain incompletely understood,” the editorialists observed. “Moreover, the study supports the hypothesis that BRIs may be particularly important for men with high-volume metastases, a hypothesis that warrants prospective testing in future studies.”

At the same time, the study exposes real-world practice patterns across major hospital systems in the US, Europe and Canada where despite being endorsed by international guidelines, over 70% of men in the study received abiraterone acetate plus prednisone alone and did not receive an additional BRI, as guidelines recommend.

“This gap is particularly noteworthy given the study’s main finding of improved overall survival with concomitant bone-targeted therapy,” as the editorialists suggested.

On the other hand, the study found no association between the specific bone agent used and OS, a fact that is important given the substantial cost differential between zoledronic acid at about $140 per year versus about $29,000 a year for denosumab.

“As the authors admit, an important limitation of their study is its underrepresentation of patients from racial and ethnic minority groups, who often present with particularly aggressive prostate cancer and [who thus] stand to benefit from these therapies,” Takvorian and Haas underscored.

“[U]nderrepresentation of racial and ethnic minority groups is endemic in cancer clinical trials and…a renewed focus on suitable participation in clinical research is needed,” as they observed.

In the meantime, the most important lesson learned from the study, in the editorialists’ opinion, is that the majority of men with mCRPC are still not being treated with guideline-recommended BRIs.

“Should they be? The answer is still yes,” Takvorian and Haas emphasized.

The editorialists had no conflicts of interest to declare.