Brazil minister resists calls for wider use of hydroxychloroquine 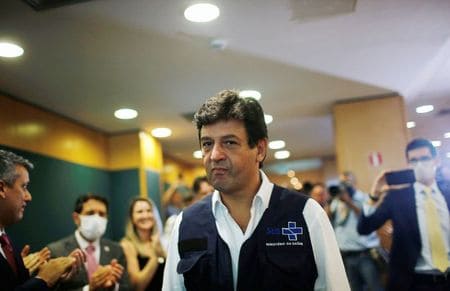 By Lisandra Paraguassu and Anthony Boadle

BRASILIA (Reuters) – On the day he nearly lost his job for supporting strict social distancing measures, Brazil’s health minister took another stand in defiance of President Jair Bolsonaro, refusing to endorse the use of hydroxychloroquine to treat the novel coronavirus.

Bolsonaro and U.S. President Donald Trump have touted the malaria drug as a potential silver bullet in treating the potentially deadly COVID-19 respiratory disease, despite a lack of scientific evidence and concerns about serious side effects.

However, Brazilian Health Minister Luiz Henrique Mandetta is resisting pressure from Bolsonaro to approve the use of the drug for patients at the first signs of illness, including lobbying from outside doctors in the presidential palace.

The pressure has mounted as public debate about appropriate use of the drug flares in Brazil and around the world. The U.S. Centers for Disease Control and Prevention published and then withdrew this week highly unusual guidance on how to prescribe the medicine in the wake of Trump’s advice.

Like most health experts, Mandetta has said the drug should only be given by medical professionals to hospitalized patients, because clinical trials have not shown it is safe and effective against the coronavirus.

Yet on Monday, hours after surviving a combative Cabinet meeting where many expected him to lose his job, Mandetta said he was taken to a room to meet two doctors who favor a much broader use of the medicine.

“They wanted to draw up a protocol to implement the use of hydroxychloroquine by decree,” Mandetta told a news conference. “I told them that was super welcome … but they should first debate the issue with their peers.”

Earlier in the day, Bolsonaro had lunch with the same doctors — immunologist and oncologist Nise Yamaguchi and anesthesiologist Luciano Dias Azevedo — to prepare guidelines for using the drug in mild cases, three government sources said.

At Bolsonaro’s request, they presented their proposed guidelines to his chief of staff, who scheduled the meeting with Mandetta that day, said the people with knowledge of the matter, requesting anonymity because the deliberations were not public.

Mandetta refused to endorse the wider use of the drug outside of hospitals. On Tuesday, he said doctors could prescribe the drug for outpatients, but they would have to take responsibility for the risks of their decision.

With an expert consensus, the ministry and the Federal Council of Medicine, which regulates the profession, could then back the idea, but it remains too early to do so, he said.

The presidential press office did not respond to a request for comment for this story.

Bolsonaro said on Wednesday the anti-malaria drug, for which he has waived import taxes, was saving lives.

Brazil’s Federal Council of Medicine warned on March 20 there was nothing conclusive yet that proves the effectiveness and safety of using hydroxychloroquine to treat COVID-19.

The regulatory body recommended against the “indiscriminate” purchase and use of the drug, saying “self-medication could be a serious health risk” and lead to shortages of the drug for people it was meant for.

“What we have is a drug that is toxic … and patients can’t just go using it for whatever,” said Dr. Lessandra Michelin, an infection specialist in southern Brazil’s Rio Grande do Sul state.

Michelin said patients at her hospital had been asking for the drug, but she was only using it on those in critical condition without other options. In the five cases she had given the drug, usually as they were put on ventilators, none had shown improvement from taking it.

Yamaguchi told Reuters she is calling, based on still unpublished findings, for hydroxychloroquine to be prescribed along with an antibiotic as soon as patients test positive or show symptoms of the coronavirus.

She said data pending publication on such early treatment by Prevent Senior, a Brazilian health plan focused on elderly care, will show that the drug can slow proliferation of the virus in the body and reduce the chances of death.

Still, she said hydroxychloroquine must be prescribed by a doctor who will take responsibility for the patient’s condition and has proposed users sign a consent form due to the untested nature of the treatment and many unknowns about coronavirus.