Can a Kidney Failure Risk Equation Better Predict ESKD, Regardless of Race? 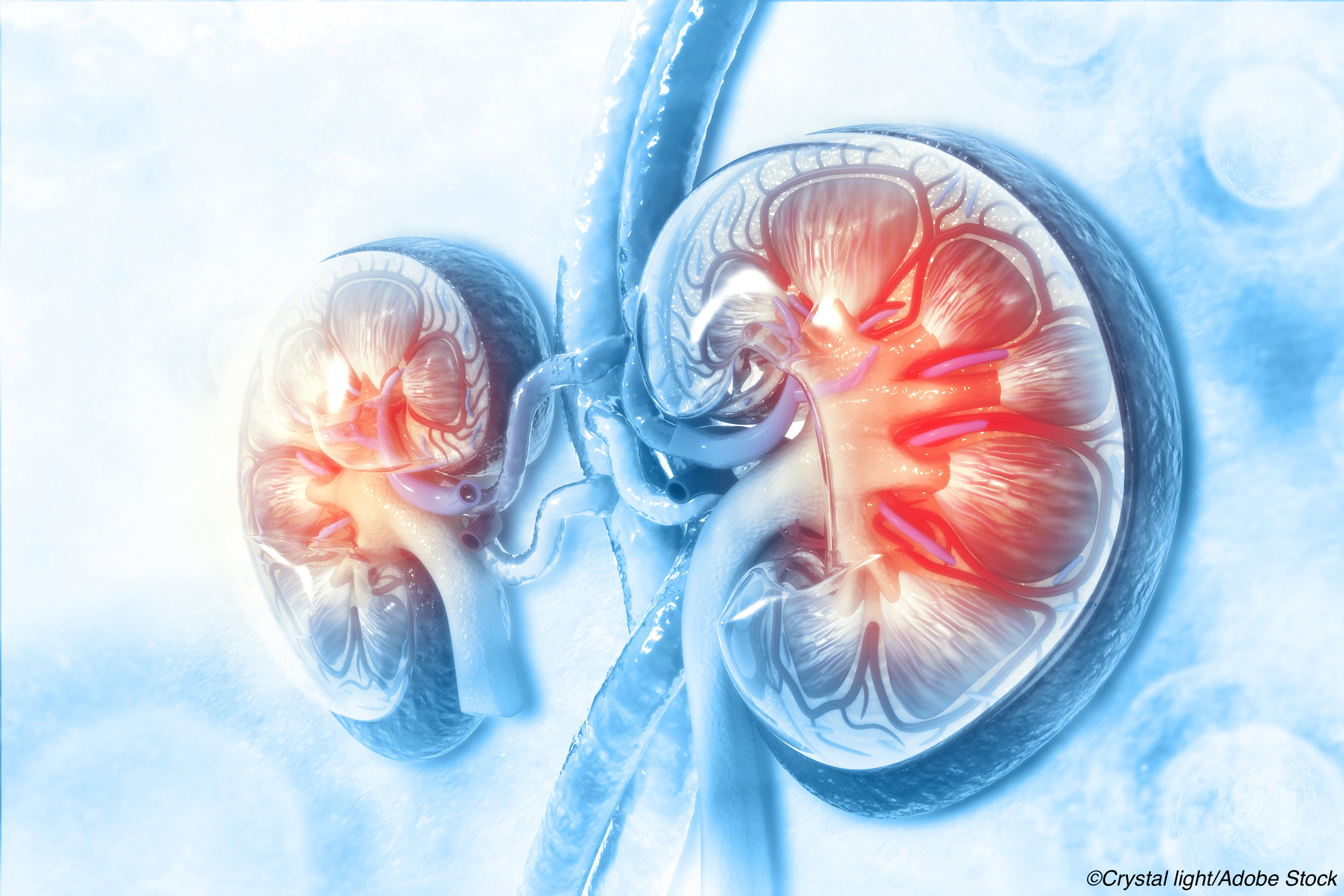 A kidney failure risk score based on four variables did a better job of predicting two-year risk for end-stage kidney disease (ESKD) versus estimated glomerular filtration rate (eGFR) alone, regardless of race adjustment, researchers reported, but a nephrology expert questioned whether the finding would offer meaningful improvement for “racial equity in kidney health.”

In more than 3,000 study participants with chronic kidney disease (CKD) who contributed 13,902 two-year risk periods, 856 developed ESKD over 16 years of follow-up. For all eGFR equations, in both Black and non-Black participants, a Kidney Failure Risk Equation (KFRE) score greater than 20% had similar specificity (about 95%) to an eGFR cutoff point of less than 20 mL/min/1.73 m2 for two-year ESKD risk, with a boost in sensitivity regardless of eGFR equation used, according to Jiang He, MD, PhD, of the Tulane University School of Public Health and Tropical Medicine in New Orleans, and co-authors.

“Our results show that eGFR alone is an excellent predictor of ESKD, but the KFRE score had substantially better discrimination than eGFR alone in our study, regardless of which eGFR equation was used,” they wrote in the Annals of Internal Medicine.

The four-variable KFRE takes into consideration age, sex, eGFR, and urinary albumin-creatinine ratio (ACR) has been validated in multinational samples, and “[c]linical guidelines mention the KFRE but cite several barriers to its use, and still use eGFR as a primary criterion for decision making,” He’s group explained.

Additionally, new eGFR equations sans race adjustment were put out in 2021 by the Chronic Kidney Disease Epidemiology Collaboration (CKD-EPI), “but it is unknown how the 2021 CKD-EPI equations affect predicted ESKD risk when used within the KFRE in Black and non-Black patients with CKD,” the authors noted, acknowledging that “race is an ill-deﬁned social construct, and its use in medicine may perpetuate racial inequities in health care delivery.”

The renal health community has put a major effort into refining equations for better predicting ESKD. Last year, the European Kidney Function Consortium (EKFC) proposed an eGFR equation with serum creatinine that generally led to lower bias across the spectrum of age and kidney function than current, guideline-based equations, although the data came from an overwhelmingly White population.

In 2021, American Society of Nephrology (ASN) and National Kidney Foundation (NKF) leaders asserted that race modifiers should be excised from equations used to estimate kidney function, In September, the ASN-NKF task force released its final report that “outlines a new race-free approach to diagnose kidney disease,” according to an NKF statement.

Even before the final report was issued in September, healthcare providers were doing away with race as a factor in kidney care. For instance, in April 2021, the University of California Davis (UCD) announced that it would calculate eGFR without the parameter of race in their patients.

“This supports the goal of narrowing some of the disparities in CKD, including the higher prevalence of CKD in African Americans compared to white patients, the higher rate of progression to ESRD [end-stage renal disease], and transplant eligibility,” explained Alexander Ladenheim MD, of UCD, and co-authors in an online statement, although they added that “without perpetuating racial phenotypes, there is acknowledgement that eGFR based on creatinine may have person-to-person variability.”

However, this streamlined approach to estimating kidney function was not heralded as a success by all. In a presentation at the 2020 ASN Kidney Week, ASN-NKF task force member Nwamaka D. Eneanya, MD, MPH, of the Hospital of the University of Pennsylvania in Philadelphia, said clinicians should evaluate “non-GFR” determinants of serum creatinine, such as generation, tubular handling, extrarenal elimination, and muscle mass). She also called for alternative eGFR equations or other measures of kidney function that do not include race, such as cystatin C and cystatin C-Cr, according to a 2020 AJMC article. “False biological beliefs will absolutely affect clinical care,” Eneanya stated.

The current study is ultimately the product of “[t]he large amount of effort that went into eliminating race from the eGFR estimating equations [that] tunneled vision from both history and science,” noted Akinlolu Ojo, MD, PhD, MBA, of the University of Kansas School of Medicine in Kansas City, in an Annals editorial accompanying the study.

While Ojo acknowledged that CKD-EPI was not intentionally racist, and that CKD-EPI developers have “consistently advocated for research to develop a more precise eGFR estimating equation without a race term and for simpler and more clinically useful race-neutral measures of GFR,” removing race from eGFR-estimating equations will not do Black patients with CKD any favors.

He stressed that Black people have CKD at a rate that is 3.5 times higher than non-Hispanic Whites and face a 7.6% lifetime risk of ESRD versus 1.7% in Non-Hispanic Whites, and that “when more information was available for ESRD risk prediction modeling as in the KFRE score, precision of measurement was not materially significantly affected regardless of whether the CKD-EPI equation (embedded in the KFRE) included race adjustment.”

Ultimately, all that data “will not have any materially significant effect on kidney health inequities experienced by Black patients with CKD today, tomorrow or a decade from now even with universal adoption of the new CKD-EPI creatinine equation refit,” Ojo said.

The study population came from the CRIC cohort study (n=3,873) in which 42.1% of participants self-reported as Black (mean age 57.8; 54.8% men). He’s group tested five CKD-EPI equations based on serum creatinine or cystatin C, with or without race adjustment, and defined ESKD as dialysis initiation or kidney transplantation. The mean follow-up was 9.3 years.

“The accurate estimation of GFR is essential for the diagnosis and management of CKD and its complications,” they noted. “Therefore, the choice of eGFR equation could have wide-ranging consequences for staging of CKD, medication dosing, dialysis referral, and transplant eligibility.”

The five CKD-EPI eGFR equations, including the new equation refit without race and the older equations with the race term “Black,” were compared in discrimination and calibration properties to the KFRE for predicting two-year risk for ESKD.

The authors reported that, no matter which of the five CKD-Epi eGFR equations were used, Black participants had lower eGFR, as well as a higher predicted two-year ESKD risk than non-Black participants, on average.

“Among Black participants, the creatinine equation with age and sex yielded the lowest eGFR on average, whereas the cystatin C equation had the highest eGFR,” they said.

Based on their statistical analysis of the data, He and co-authors found KFRE was a stronger predictor of ESKD then eGFR alone, across all ethnicities and across all eGFR equations. They explained that a higher area under the receiver operating characteristic curve (AUC) indicated better discrimination while the integrated discrimination improvement ((IDI) offered “the average increase in sensitivity given no changes in speciﬁcity:”

“Our results show that eGFR alone is an excellent predictor of ESKD, but the KFRE score had substantially better discrimination than eGFR alone in our study, regardless of which eGFR equation was used,” the authors concluded.

Study limitations included the lack of urinary ACR measurements during follow-up in CRIC, so urinary ACR was imputed for KFRE, which may have increased variability. Also, CRIC was a U.S.-based population so the findings may not be globally generalizable.

As far as Ojo is concerned, broader improvements in healthcare and public health systems would be a more laudable goal, rather than “fine tuning” scoring systems “with or without refit CKD-EPI equation,” he said.

Ojo reported honoraria from Vertex Pharmaceuticls, Inc., participation on data safety monitoring boards for the R3 and APOLLO studies, and holding the role of vice-chair on the board of directors at Arbor Research Collaborative for Health.