Two studies from U.K. researchers detail differences, similarities of this variant of concern 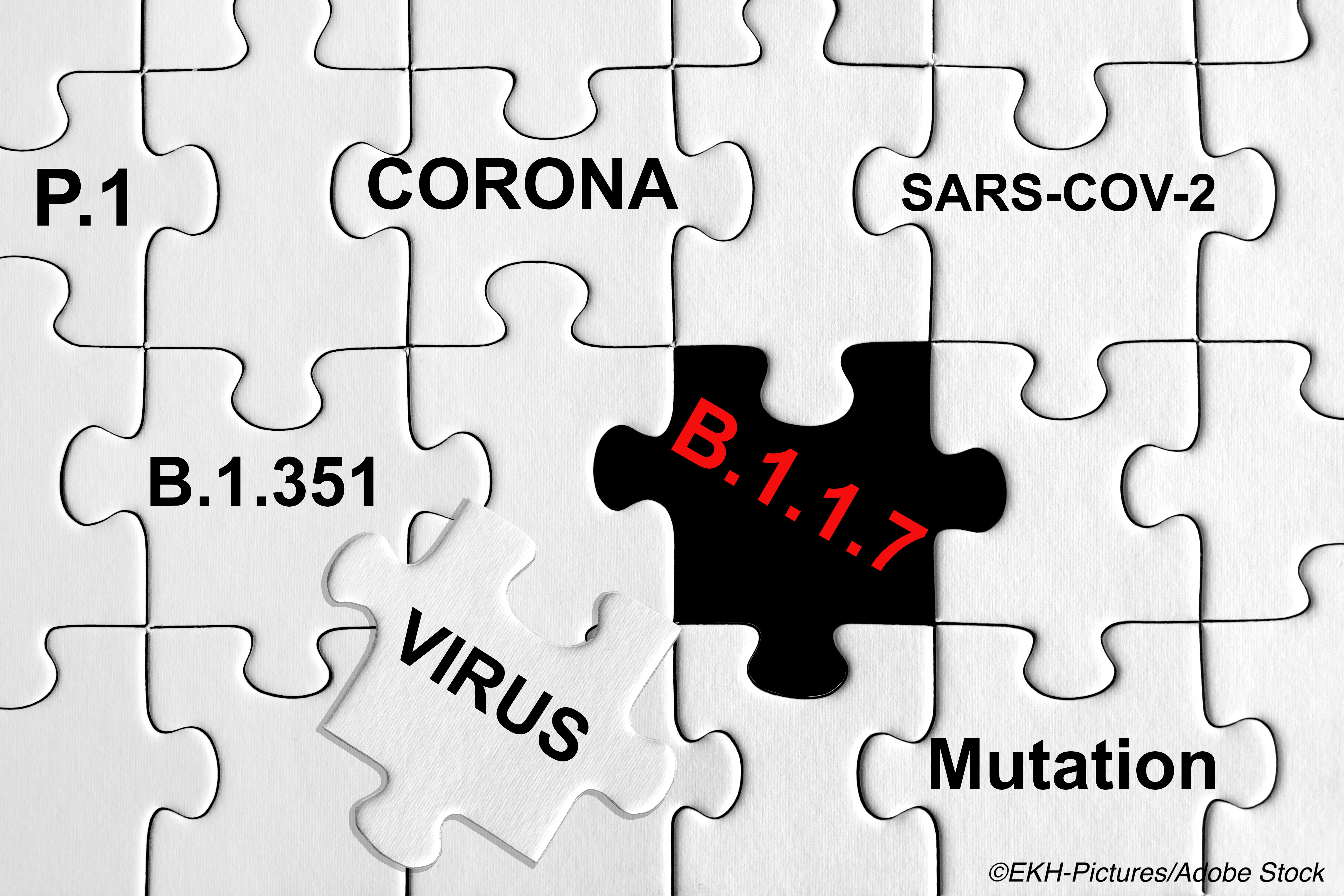 Although the B.1.1.7. variant of the SARS-CoV-2 virus has been shown to have both increased transmissibility and viral load, it was not associated with severe disease, worse outcomes, or increased mortality, according to two studies from U.K. researchers published in The Lancet Infectious Diseases.

In the first of these, researchers led by Dan Frampton, PhD, of the Division of Infection and Immunity, University College London, U.K., studied a cohort of 341 hospitalized patients diagnosed with SARS-CoV-2 via PCR. In all, 58% were infected with the B.1.1.7. variant and 42% had non-B.1.1.7 infection.

They found no B.1.1.7 variant defining mutations in the 123 chronically shedding immunocompromised patients, or in 32 patients treated with remdesivir. The calculated viral load by proxy—measured by cycle threshold value and genomic read depth—was higher in B.1.1.7-infected samples compared with non-B.1.1.7 (mean: 28.8 versus 32.0, respectively; P=0.0085 and 1,280 versus 831; P=0.0011, respectively).

But, according to Sean Wei Xiang Ong, MBBS, of the National Center for Infectious Diseases, Singapore, and colleagues, the lack of detail in this study makes for incomplete analysis and characterization of the B.1.1.7 variant and more studies are needed.

“Their observation that B.1.1.7 infections were associated with increased viral loads corroborates findings from two other studies and provides a mechanistic hypothesis that increased transmissibility is via increased respiratory shedding. Yet, disease severity and clinical outcomes between patients with B.1.1.7 and non-B.1.1.7 infections were similar after adjusting for differences in age, sex, ethnicity, and comorbidities. Importantly, this study was done from Nov. 9 to Dec. 20, 2020, before the late-December peak in U.K. Covid-19 infections, avoiding any confounding effect of the availability of health-care resources on mortality,” they wrote in an accompanying editorial.

“Active, timely, and broad-based genomic surveillance is crucial for their early detection. But careful epidemiologic and clinical assessment, coupled with a healthy skepticism, is important when assessing claims of the effect of these variants,” Ong and fellow authors concluded.

In the second of these studies, UK researchers led by Mark S. Graham, PhD, of King’s College London, London, U.K., concluded that changing existing tests and surveillance of Covid-19 to better track the B.1.1.7. variant is unnecessary. They found no increases in reinfection rate in individuals infected with the B.1.1.7 variant of Covid-19 and no differences in disease symptoms or duration. They also concluded that vaccines are also likely to remain effective against this variant and published their results in The Lancet Infectious Diseases.

In this ecological study, Graham et al looked at whether increases in the number of people infected with the SARVS-CoV-2 variant B.1.1.7 are associated with differences in symptomatology and disease course, reinfection, and transmissibility using data from the Covid Symptom Study app on the types and duration of symptoms between Sep. 28, 2020, and Dec. 27, 2020, in the U.K.

During this period, 36,920 positive Covid-19 tests were reported. There were no changes in reported symptoms or disease duration associated with B.1.1.7. Reinfections were seen in 249 of the app users with a positive swab test before Oct. 1, 2020, but no evidence indicated a higher frequency of reinfection for the B.1.1.7 variant than for pre-existing variants.

Graham and colleagues found that reinfection was more positively correlated with overall regional rise in cases than with the regional increase in the number of infections with the B.1.1.7 variant, which suggests that this variant does not substantially change the risk of reinfection.

They also found an increase in the effective reproduction number, R1, of B.1.1.7 by a factor of 1.35 (95% CI: 1.02-1.69) compared with pre-existing variants. But, during regional and national lockdowns, the R1 fell below 1, even in locations that had a high proportion of B.1.1.7 variant infections.

“This study adds to the consensus that B.1.1.7 has increased transmissibility, which has contributed in large part to the sharp rise in cases in the UK over the study period and beyond, as well as ongoing third waves in European countries with growing burdens of B.1.1.7 cases,” wrote Britta L. Jewell, PhD, of the MRC Centre for Global Infectious Disease Analysis and the Abdul Latif Jameel Institute for Disease and Emergency Analytics, Imperial College London, UK, in an accompanying editorial.

Jewell added that although B.1.1.7. has symptoms similar to those of the original SARS-CoV-2 strain, new variants “are inevitable” and genomic surveillance must be maintained if the pandemic is to be ended.

“The data suggest that, despite important changes in transmissibility and mortality, B.1.1.7 is similar enough to non-[variants of concern] VOC lineages for current testing infrastructure and symptom profiles to identify new cases. Additionally, existing non-pharmaceutical interventions can reduce the Rt of B.1.1.7 to below 1, given adequate governmental planning. Fortunately, B.1.1.7 also appears to be quite effectively combatted by existing vaccines,” Jewell concluded.

Limitations of the study from Frampton et al included that disease severity was captured within 14 days of a positive Covid-19 test, that comparisons were not corrected for the various treatments used, the possibility that some patients received ventilation for reasons other than Covid-19, and loss of outcome data due to patient discharge or death.

Graham and colleagues acknowledged that their study did have some limitations, including that causal effects of B.1.1.7. could not be assessed due to the lack of information on the disease strain of individual positive cases, possible errors on the part of app users when inputting information, the possibly increased interest in health and Covid-19 among individuals registering for the app compared with the general population, and their possibly different health behaviors.