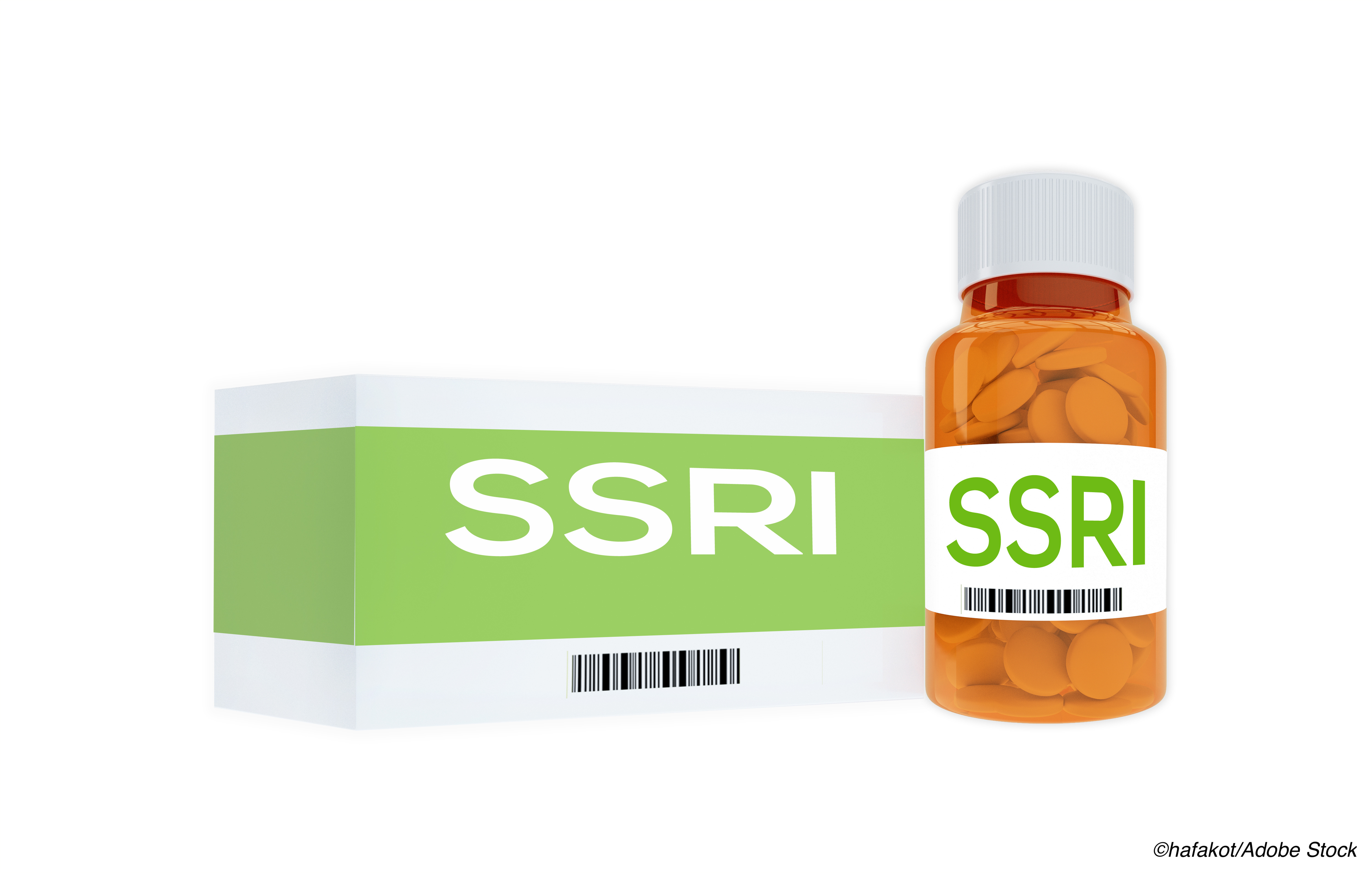 Can a relatively inexpensive selective serotonin reuptake inhibitor (SSRI) keep highly symptomatic Covid-19 patients out of the hospital? The short answer is “yes,” according to a randomized, placebo-controlled trial from Brazil that showed that the SSRI was effective in helping patients avoid further in-hospital treatment.

In that trial, out of 741 trial participants receiving 100 mg of fluvoxamine twice daily for 10 days, 79 (11%) required further treatments in the emergency department for more than 6 hours or were admitted to the hospital compared with 119 (16%) of 756 participants receiving placebo, “(relative risk [RR] 0.68; 95% Bayesian credible interval [95% BCI]: 0.52-0.88) with a probability of superiority of 99.8% surpassing the prespecified superiority threshold of 97.6% (risk difference 5.0%),” Gilmar Reis, PhD, Research Division, Cardresearch—Cardiologia Assistencial e de Pesquisa, Belo Horizonte, Brazil, and colleagues reported in Lancet Global Health. The fluvoxamine study is part of the TOGETHER trial, which is looking at repurposed therapies for the prevention of Covid-19 disease progression. Reis is one of the co-principal investigators of this international endeavor.

“Our trial has found that fluvoxamine, an inexpensive existing drug, reduces the need for advanced disease care in this high-risk population,” the researchers wrote. “A 10-day course of fluvoxamine costs approximately U.S. $4 even in well resourced settings.”

However, in the United States, as of April 2021, the NIH did not recommended for or against the use of fluvoxamine for the treatment of Covid-19 due to what it said was insufficient evidence, and the drug is not yet listed on the WHO Essential Medicines list. However, WHO does list fluoxetine, another SSRI, and as Reis and colleagues note: “It is now crucial to establish whether a class effect exists and [whether] these drugs can be used interchangeably for Covid-19.”

Other questions arise from the research from Reis and the TOGETHER trial team.

Writing in an accompanying editorial, Otavio Berwanger, MD, PhD, from Academic Research Organization (ARO), Hospital Israelita Albert Einstein, Sao Paulo-SP, Brazil, noted that there are still questions as to the efficacy and safety of fluvoxamine in Covid-19 patients and that there are still questions on individual outcomes such as mortality and hospitalizations that need to be answered.

“In addition, it remains to be established whether fluvoxamine has an additive effect to other therapies such as monoclonal antibodies and budesonide, and what is the optimal fluvoxamine therapeutic scheme,” Berwanger, who was not associated with the research wrote. “Finally, it is still unclear whether the results from the TOGETHER trial extend to other outpatient populations with Covid-19, including those without risk factors for disease progression, those who are fully vaccinated, and those infected with the delta variant or other variants”.

The primary outcome of the trial was “a composite endpoint of hospitalization defined as either retention in a Covid-19 emergency setting or transfer to tertiary hospital due to Covid-19 up to 28 days postrandom assignment on the basis of intention to treat [ITT]. Modified intention to treat [mITT] explored patients receiving at least 24 hours of treatment before a primary outcome event and per-protocol analysis explored patients with a high level adherence (>80%),” Reis and colleagues wrote.

The trial screened nearly 10,000 people for eligibility and after excluding more than 6,000, there were 3,323 participants randomly assigned with 1,497 participants randomized to the fluvoxamine versus placebo arm and 1,826 allocated to other treatment groups of the TOGETHER trial not reported in this analysis.

The trial start date was June 2, 2020, and the fluvoxamine portion was analyzed from Jan. 20 to Aug. 5, 2021. The trial was stopped on Aug. 5 for superiority and the researchers reported the data on all patients who completed 28 days of follow-up as of Sept. 9, 2021.

The median age of participants in the trial was 50 years, most (58%) were women, most identified themselves as mixed race (95%), White (1%), and Black or African heritage (1%), with 3% as unknown. The groups were well-balanced in terms of body-mass index and comorbidities. And the mean number of symptomatic days prior to randomization was 3.8 (SD 1.87).

Of the primary outcome, “[m]ost events (87%) were hospitalizations. On the basis of the Bayesian beta binomial model, there was evidence of a benefit of fluvoxamine reducing the composite primary endpoint of hospitalization defined as either retention in a Covid-19 emergency setting or transfer to tertiary hospital due to Covid-19 (RR 0.68; 95% Bayesian credible interval [BCI] 0.52-0.88) in the ITT population and RR 0.69; 95% BCI 0.53–0.90 in a modified ITT population,” Reis and colleagues wrote. “The number needed to treat was 20. Per-protocol analysis showed a larger treatment effect (0.34, 95% BCI 0.21-0.54). The probability that the event rate was lower in the fluvoxamine group compared with placebo was 99.8% for the ITT population and 99.7% for the mITT population.”

In looking at tolerability, 84 participants in the fluvoxamine arm versus 64 in the placebo arm stopped treatment. “Per protocol findings among patients who reported optimal adherence (greater than 80% for possible days) indicated a significant treatment effect (RR 0.34; 95% BCI 0.21-0.54) for the primary outcome and for mortality (odds ratio 0.09; 95% CI 0.01-0.47,” Reis and colleagues wrote.

The finding on tolerability is important, David Boulware, MD, MPH, of University of Minnesota Medical School, in Minneapolis, told Endpoints News, “the outcomes were better among those who could tolerate the medicine, where the most common side effects were gastrointestinal in nature. Among those who took at least 80% of the fluvoxamine, there was a two-thirds reduction in hospitalizations or ER visits—as well as deaths being reduced by 90% with only one death in the fluvoxamine [arm of the trial] versus 12 with placebo.”

Boulware also noted that there were two trials in the United States studying lower doses of fluvoxamine (50 mg twice a day), which he noted would likely be more tolerable with fewer side effects.

The researchers also noted that the number of treatment emergent adverse events were not significantly different between the two groups.

Limitations of the trial include the fact that as of now, there is no standard of care for Covid-19 as well as a general understanding of patients at greatest risk for disease progression.

“Finally, when the trial began, vaccines were not available in Brazil but became more widely available as the trial progressed,” the study authors noted. “Although we modified inclusion criteria and permitted vaccinated patients during the trial, we believe this had minimal effect on the primary outcome as only 86 (6%) of 1,497 reported at least one dose of a Covid-19 vaccine at the end of the trial,” Reis and colleagues wrote.

The TOGETHER trial was funded by FastGrants and The Rainwater Charitable Foundation.

Reis disclosed being employed by Cardresearch.