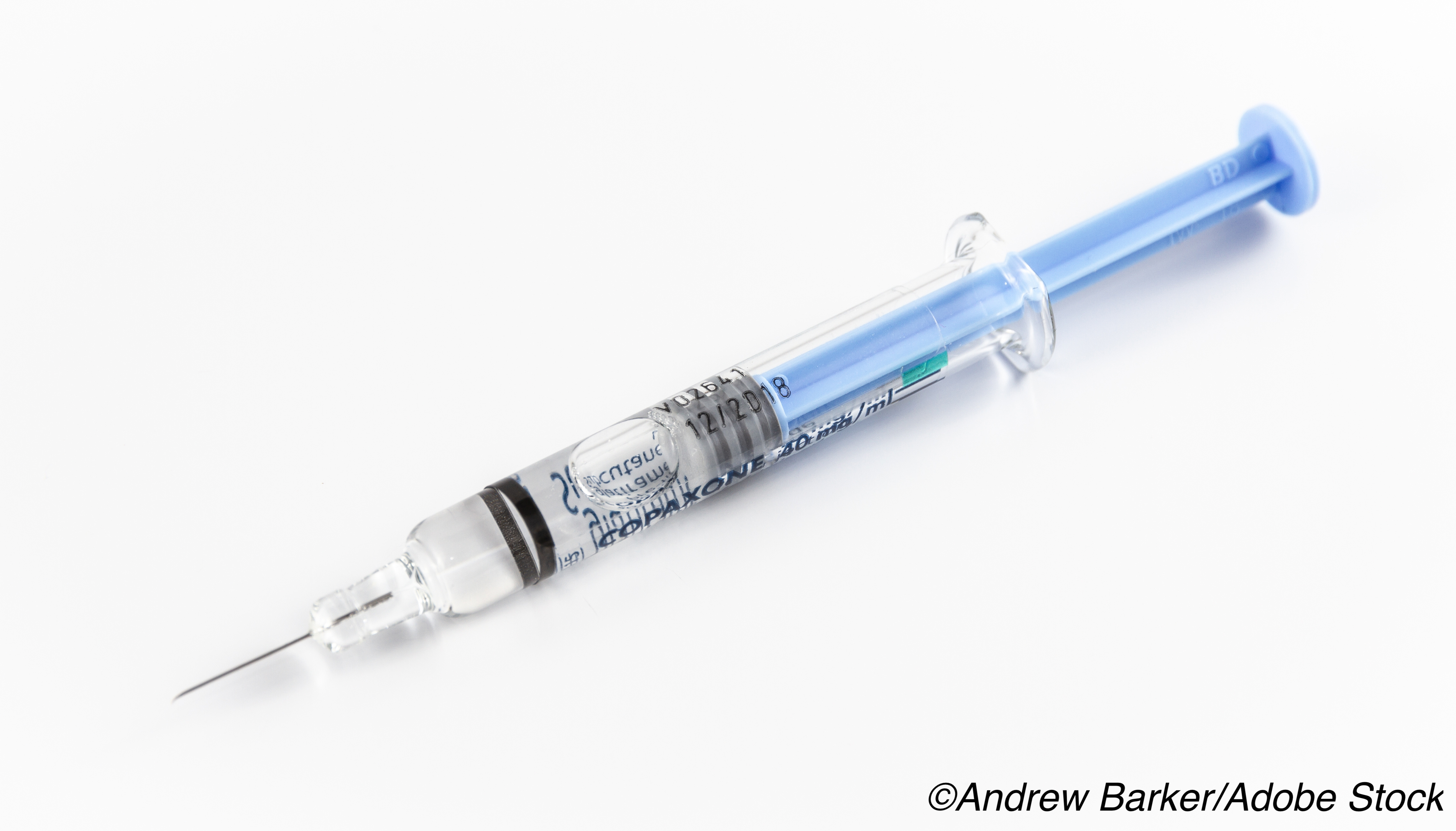 Full generic competition for glatiramer acetate (Copaxone), a multiple sclerosis (MS) drug, was delayed by more than 2 years, and this delay was associated with excess U.S. spending of $4.3 billion to $6.5 billion, an economic evaluation suggested.

Market exclusivity for daily injections of glatiramer acetate expired in 2015. In 2014, the drug’s manufacturer, Teva Pharmaceuticals, introduced an alternate 3-times-weekly version that was widely adopted, and brand-name glatiramer continued to dominate the market until late 2017.

Prices and spending remained high until generic competition for daily and 3-times-weekly versions began in 2017, said Benjamin Rome, MD, of Brigham and Women’s Hospital in Boston, and colleagues.

“Extended market exclusivity from introducing a new version of an existing brand-name drug can yield manufacturer returns out of proportion to the level of investment or risk involved; more limited incentives could encourage incremental innovations to existing drugs at a lower societal cost,” they wrote.

“The 3-times-weekly version appeared to offer better tolerability and fewer adverse effects, but it is unclear whether this benefit could have been achieved with alternative incentives at a lower cost to payers and patients,” they added.

In their analysis, Rome and colleagues looked at manufacturer list prices for generic products and estimates of net (post-rebate) prices for brand-name products. They included data between January 2011 to June 2019 from Medicare Part D, Medicaid, and claims of commercially insured and Medicare Advantage patients. They estimated the data sources together accounted for about 40% of the U.S. glatiramer market and noted that not all the excess spending identified may be attributable to competition-blocking efforts.

“Product switching (often termed product hopping) is not new,” observed Jennifer Claytor, MD, MS, and Rita Redberg, MD, both of the University of California San Francisco, in an accompanying editorial.

“Product hops can be defined by (1) manufacturer reformulation of a branded product to ensure that an imminently available generic is not substitutable and (2) manufacturer encouragement of prescriptions for a reformulated product rather than the original product,” they noted. They often draw less attention than “exorbitantly priced novel agents because patients and the public are usually unaware of the decreased costs that should be expected with entry of generic products into the market,” they continued.

The excess spending reported in this study may have occurred “because the manufacturer of glatiramer acetate, a disease-modifying drug for multiple sclerosis that patients must take indefinitely, waited until 1 year before the expiration of the patent of their original product to reformulate it, effectively delaying full generic competition,” the editorialists suggested.

“The combination of these factors allowed Teva to increase its earnings for another 2.5 years by delaying market competition that could have driven down the prices of both generic and brand name glatiramer,” they wrote.

Patients with autoimmune conditions who require life-long disease-modifying therapy may be particularly affected by pharmaceutical company practices that delay competition, the editorialists noted, pointing to similar issues in another medication class and FDA approval pathway that were described in a research letter also in JAMA Internal Medicine.

In that letter, Alice Chen, PhD, of the University of Southern California, and coauthors, explored the fate of infliximab (Remicade), a branded biologic used to treat chronic inflammatory conditions including rheumatoid arthritis and inflammatory bowel disease, and its generic biosimilars infliximab-dyyb (Inflectra) and infliximab-abda (Renflexis). They compared changes in price and prescription patterns for the drugs, comparing them with the first approved biosimilar, a granulocyte colony stimulating factor called filgrastim-sndz with different indications, and its effects on markets and prices.

“Two years after launch, biosimilars captured only 10% of the infliximab market and lowered reimbursements by 17%, a slower adoption trajectory relative to biosimilars in the filgrastim market,” Chen and colleagues wrote.

“Reasons for the slower uptake are unknown, but biosimilar adoption may be expected to be slower in chronic versus acute conditions,” they added. “Prescribers may hesitate to switch clinically stable chronic patients from biologic regimens if they are unfamiliar with the biosimilar or face financial disincentives from prescribing it.”

“Drug manufacturers earn billions of dollars in additional revenue by delaying generic competition through introduction of new versions of existing products,” Rome and colleagues wrote. “Although modified products may offer incremental benefits, the financial reward is not tied to the cost of development of the new product or the value to patients.”

“The pervasive lack of pricing transparency and numerous obstacles to market entry documented in the articles by Rome et al and Chen et al should be addressed immediately,” the editorialists wrote.

“Otherwise, patients will experience unnecessary delays for more convenient and less painful products,” they added. “Moreover, patients, Medicare, and other insurers will continue to incur avoidable additional billions of dollars each year of drug spending because of continued product hopping.”

The glatiramer acetate study was funded by the Anthem Public Policy Institute and Arnold Ventures. Rome reported personal fees from Blue Cross Blue Shield of Massachusetts and Alosa Health outside the submitted work.

The infliximab study was supported by the Leonard D. Schaeffer Center for Health Policy & Economics and the NIH’s National Institute on Aging. Chen reported grant funding from NIH and personal fees from Amgen outside the submitted work.

Neural Correlates of Adolescent Irritability and Its Comorbidity With Psychiatric Disorders.