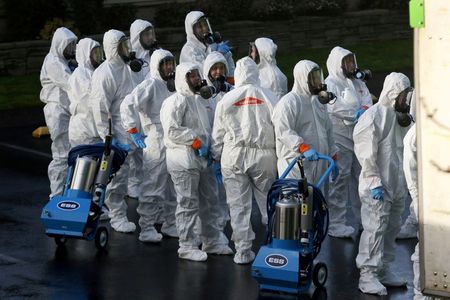 By Julie Steenhuysen and Carl O’Donnell

CHICAGO/NEW YORK (Reuters) – The entry of commercial lab companies Laboratory Corporation of America Holdings and Quest Diagnostics Inc to help identify cases of the new coronavirus does not seem to be easing the burden of testing in the United States.

Boosting testing capacity is crucial to assessing the scope of the U.S. outbreak and identifying where it is spreading most rapidly. There are currently more than 1,300 documented cases of coronavirus in the country, according to data from Johns Hopkins University, but experts say the actual number may be much higher because of the scarcity of diagnostic tests. There have been at least 38 documented deaths so far.

Last Friday, President Donald Trump said that “anyone who wants a test, gets a test.” Nearly a week later, the ramp up appears much slower due to regulatory hurdles, as well as logistical and technical challenges, according to healthcare providers, public health officials and test makers.

LabCorp and Quest said they now have the capacity to conduct thousands of tests per day and that they have already begun testing individuals for the respiratory disease caused by the coronavirus, COVID-19. But patients, doctors and government officials say there is still a shortage.

Earlier this week, a Reuters reporter who had contact at a conference with a person later diagnosed with COVID-19 started to develop symptoms on Tuesday and went to a clinic in Oxnard, California, for testing.

She was told that if the test were sent through Quest Diagnostics, it would take weeks to get a result. That compared to the one to three days it would take if the state’s department of public health ran the test.

But turnaround time for results is typically three to four days, not including time for collection and handling by the healthcare provider.

Quest Diagnostics gave the same estimate – results within three to four days of the time of specimen pickup – but said timing may be impacted by high demand.

“The system is not really geared to what we need right now,” Dr. Anthony Fauci, director of the National Institutes of Allergy and Infectious Disease, said in a congressional briefing on Thursday. “That is a failing. Let’s admit it,” he said.

“The idea of anybody getting it easily the way people in other countries are doing it, we’re not set up for that.”

New York City Mayor Bill de Blasio said on Thursday that the city might push forward with using its own automated, high-volume tests without federal sign off if the U.S. Food and Drug Administration does not move more quickly to approve them.

“There has been talk of localities taking matters into their own hands. I believe that that is what’s going to happen if we don’t get this federal approval. And I think this is bluntly the last chance,” de Blasio said at a news conference.

Several manufacturers, including Thermo Fisher Scientific Inc, are in talks with U.S. regulators to get high-capacity coronavirus diagnostic tests approved in the coming weeks, industry executives told Reuters. That could help reduce delays in testing.

FDA spokeswoman Stephanie Caccomo said that labs no longer need to wait for its approval to begin testing patients. They only need to validate that the tests work for themselves and notify the FDA. They can then pursue emergency approval while simultaneously conducting tests.

But New York City Department of Health spokeswoman Stephanie Buhle said that the FDA’s policies do not allow large manufacturers of high volume, automated coronavirus tests to put them to use without approval by the regulator, limiting the city’s ability to proceed with automated testing.

The FDA did not respond directly to the statements from de Blasio or NYC Health.

According to the Association of Public Health Laboratories, 81 public health labs are running tests for COVID-19 in all 50 states.

Dr. Amesh Adalja, an infectious disease expert at the University of Pittsburgh Medical Center, said doctors are still constrained in ordering tests. When hospitals use public health laboratories, they must follow state guidance on who to test.

Hospitals’ own internal bureaucracy is also a factor. “If you’re sending it to Quest or LabCorp, the test has to be sent out of the hospital,” he said. “That requires paperwork.”

Administrators will want to know who is being tested, why they are being tested and whether the staff has been exposed to the virus.

“There are many disincentives to testing,” said Adalja, who is also a senior scholar at the Johns Hopkins Center for Health Security. “What we really need is to have test kits in the hands of doctors and hospitals, where they don’t have to send it out.”

One lab at the University of Washington Medical Center ran more than 1,300 tests on Wednesday and may ramp up to 2,300 per day by Friday, said Alex Greninger, assistant director of clinical virology laboratories.

He said the main bottleneck is a lack of personnel to receive, log and label samples. The lab has put out a university-wide call for more staff.

“We’re doing one specimen a minute and need to get down to one every five seconds,” he said.