Digoxin Could Sub for Beta-Blockers in Certain AFib Patients 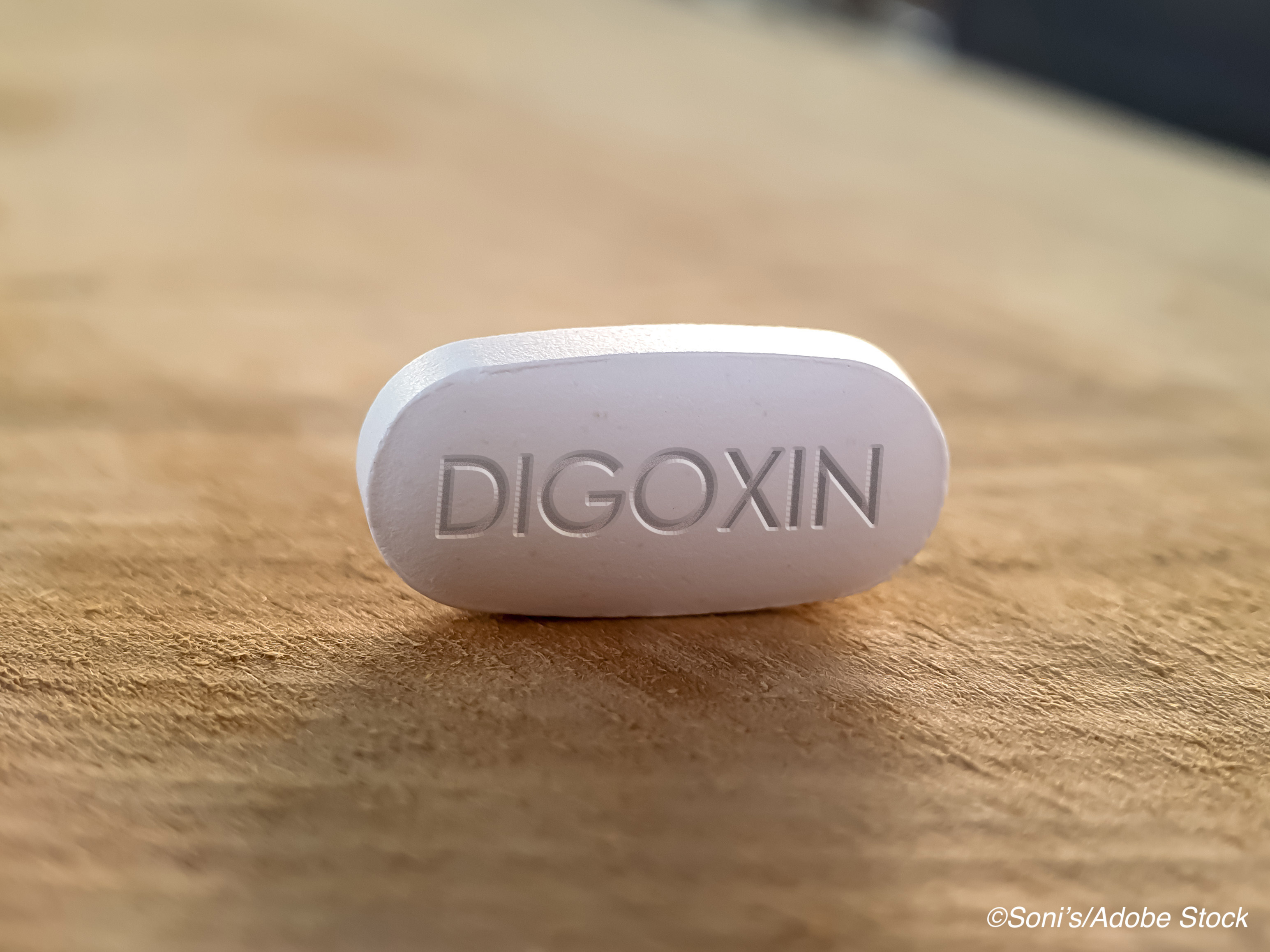 Low-dose digoxin may be useful to consider as second-line agent, experts suggest

In the RATE-AF trial with 160 participants (ages ≥60) with atrial fibrillation (AFib) and symptoms of heart failure (HF) who were randomized to digoxin (mean attained dose 161 μg/d) versus bisoprolol (mean attained dose 3.2 mg/d), the mean 36-Item Short Form Health Survey physical component summary scores (SF-36 PCS) were 31.5 for the digoxin group versus 29.3 for the bisoprolol group at 6 months, for a difference that was not statistically significant, according to Dipak Kotecha, MD, PhD, MSc, of the Institute of Cardiovascular Sciences at the University of Birmingham Medical School in England, and co-authors.

However, the modified European Heart Rhythm Association class was significantly different between groups at 6 months; 53% of patients in the digoxin group reported a 2-class improvement versus 9% of those in the bisoprolol group (adjusted odds ratio 10.3, 95% CI, 4.0 to 26.6, P<0.001), they wrote in JAMA.

And at 12 months, multiple other outcomes favored digoxin over the β-blocker, including less adverse events (AEs), the authors stated.

“This trial was designed to address a major evidence gap in the management of patients with AFib and included outcomes of concern for patients in this increasing population,” Kotecha and co-authors explained. “Without adequate RCTs [randomized controlled trials], clinicians have relied on anecdotal experience to guide prescription of heart rate control therapy, often defaulting to ß-blockers in routine practice.”

But in a 2014 meta-analysis, Kotecha and colleagues found that patients with HF with reduced ejection fraction (EF) did benefit from ß-blockers in terms of a reduction on all-cause mortality in sinus rhythm, but the subgroup with baseline AFib saw no gains.

For the latter patients, “there was no statistically significant difference in quality of life at 6 months [with low-dose digoxin or bisoprolol treatment in RATE-AF]. These findings support potentially basing decisions about treatment on other end points,” the authors concluded.

Given that the trial was small and open label, “the results may not markedly change the current clinical practice guidelines for heart rate control in AFib,” pointed out Gregory Curfman, MD, JAMA deputy editor, in an editor’s note accompanying the study.

“Still, among patients with permanent AFib who do not tolerate β-blockers or calcium channel blockers, or who do not adequately respond to these drugs, digoxin may be useful to consider as a second-line agent,” he added.

With support from other research, such as the DIGIT-HF trial, “digitalis glycosides may once again find a valuable, albeit ancillary, place in the therapeutic armamentarium for treatment of patients with AFib,” Curfman stated.

For RATE-AF, patients could not have permanent AFib, which was defined as no plan to restore sinus rhythm. Patient could have dyspnea classified as New York Heart Association class ≥II. Patients were recruited from tree hospitals and primary care practices in England from 2016 through 2018, with the last follow-up in October 2019.

The trial’s primary endpoint was patient-reported quality of life using the 0 to 100 SF-36 PCS at 6 months – higher scores are better — with a minimal clinically important difference of 0.5 standard deviation, the authors explained. There also were several secondary endpoints at 6 and 12 months.

The 160 patients (mean age 76; 46% women; predominantly white in both groups) had a mean baseline heart rate of 100/min (patients with a baseline heart rate of <60/min were excluded). The majority of patients in both groups were being treated for hypertension. More patients in the digoxin group had a previous diagnosis of HF (43.8% of 80 patients versus 30.0% of 8o patients). Also, 7.5% of the patients in the digoxin group had undergone cardioversion versus 11.3% in the bisoprolol group.

Among all the patients, 91% completed the trial and 94% were included in the analysis for the primary outcome, according to the authors.

But the authors found that at 12 months, numerous outcomes were significantly different between the digoxin and bisoprolol groups:

They also noted that 96% of patients randomized to digoxin were still taking the drug versus 89% randomized to bisoprolol, while 9% in the latter group switched to an alternative β-blocker due to AEs. And 6.8% of those in the digoxin group required an additional drug for heart rate control compared with 1.4% in the bisoprolol group. Finally, 5.0% of patients in the digoxin group died versus 8.8% on bisoprolol or another ß-blocker (1.3% versus 5.5%, respectively, related to cardiovascular causes).

Study limitations included the facts that the trial lacked power to compare major CV AEs and that the results “do not apply to patients with severe reduction in [left ventricular EF], or to those admitted with uncontrolled AFib or decompensated heart failure because acute heart rate control in these scenarios is often more challenging,” the authors explained.

The RATE-AF trial was funded by the National Institute for Health Research (NIHR) and the British Heart Foundation accelerator award to the University of Birmingham Institute of Cardiovascular Sciences.

Curfman reported no relationships relevant to the contents of this paper to disclose.