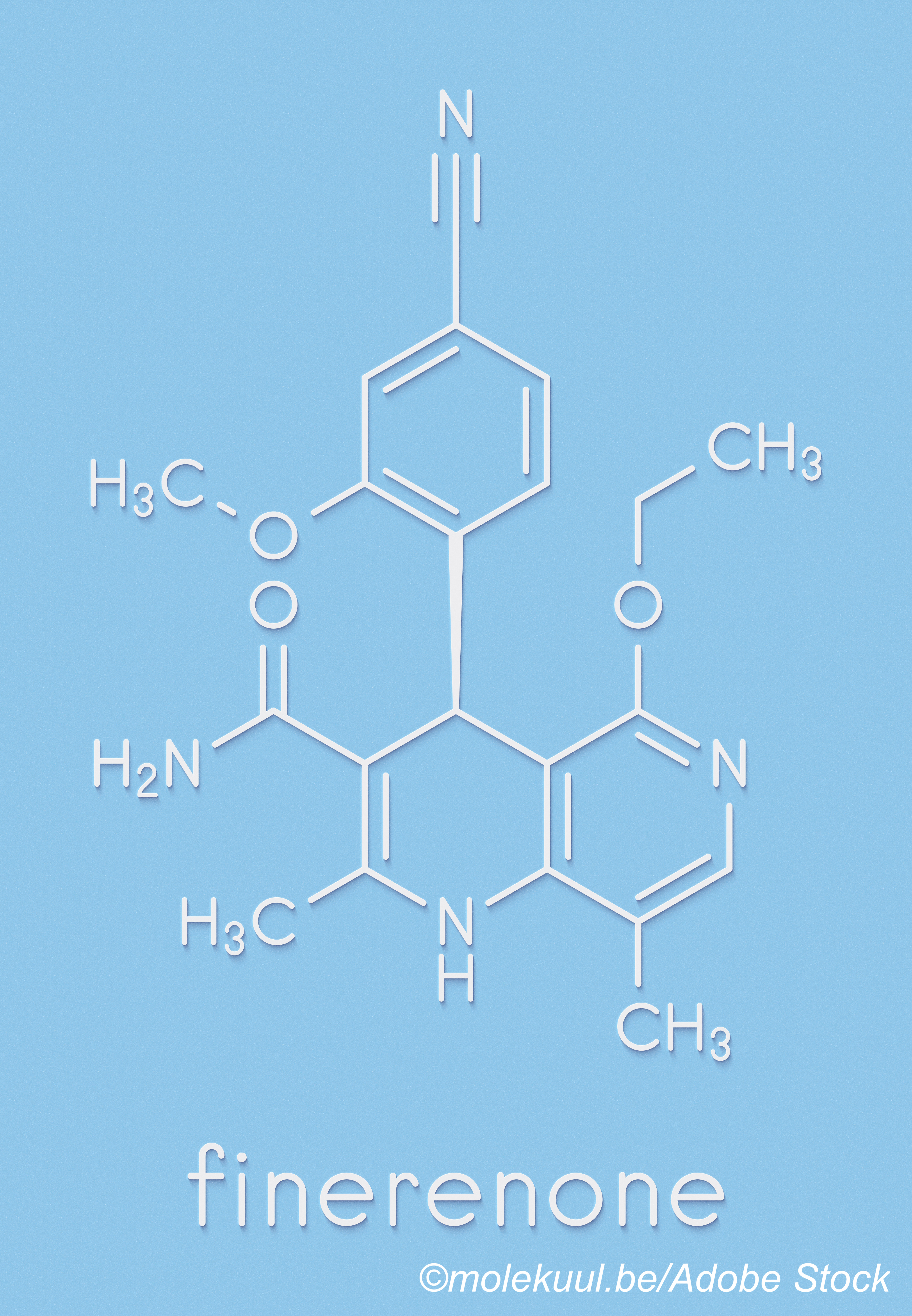 SGLT2 inhibitors were not the only treatments in 2021 showing cardiac benefit for patients with chronic kidney disease and type 2 diabetes, as this article chosen for our year-end review shows. Finerenone bested placebo in the FIGARO-DKD trial, giving this patient population another potential treatment option. Click here to view the original article, which was published Sept. 1, 2021, and obtain CME/CE credit.

The randomized trial compared finerenone (10 or 20 mg daily) to placebo in 7,437 patients who were followed for an average of 3 to 4 years. The primary outcome measure—a composite of time to cardiovascular events, including nonfatal myocardial infarction, nonfatal stroke, hospitalization for heart failure or cardiovascular death—occurred in 458 (12.4%) of finerenone and 519 (14.2%) of controls. That worked out to a 13% reduction in relative risk for a cardiovascular event with finerenone versus placebo, which was significant (P=0.03), said lead investigator Bertram Pitt, MD, of the University of Michigan School of Medicine in Ann Arbor.

Pitt reported the FIGARO-DKD findings as a late-breaking clinical trial in a Hot Line presentation at the ESC Congress 2021 The Digital Experience. The study was simultaneously published online by The New England Journal of Medicine.

He said the cardiovascular benefit was driven by a 29% reduction in hospitalization for heart failure, which he characterized as “an important benefit that is sometimes not well appreciated by clinicians who are focused on renal and [type 2 diabetes] T2D outcomes.”

“At baseline, 8.4% of the patients were being treated with a sodium–glucose cotransporter 2 (SGLT2) inhibitor and 7.5% with a glucagon-like peptide-1 (GLP-1) receptor agonist; an additional 15.8% and 11.3% of patients, respectively, started treatment during the trial,” Pitt et al wrote. These are important considerations because during the course of the trial, which was conducted from September 2015 through October 2o18, guidelines were updated to include SGLT2 inhibitors or GLP-1 receptor agonists to reduce cardiovascular disease in patients with chronic kidney disease (CKD) and T2D.

More data are “needed to establish whether combination therapy with finerenone and an SGLT2 inhibitor would result in greater cardio-renal protection than these therapies alone in patients with CKD. Together, these findings suggest a more positive future for patients with CKD and T2D, with three effective drug classes now available,” Pitt said. Finerenone received FDA approval in July 2021.

The secondary outcome measure was composite of kidney failure, sustained decrease in estimated glomerular filtration rate (eGFR) of more than 40% from baseline, or renal death, but this endpoint did not reach statistical significance, with 9.5% of finerenone patients and 10.8% of placebo patients experiencing a renal event.

During an ESC press briefing, Pitt said, “the sustained eGFR reduction of 40% did trend positive, but did not quite reach significance. However, a more stable and sensitive endpoint that has been used in most of the other renal trials, including trials of SGLT-2 inhibitors, is a reduction of 57% in eGFR, and when we looked at that endpoint, it was significant and finerenone treatment significantly reduced the need for dialysis.”

Asked why the 40% reduction in eGFR was chosen for FIGARO-DKD, Pitt said it was selected based on direction from the FDA.

BreakingMED asked Prakesh Deedwania, MD, who is co-chair of the American College of Cardiology’s Diabetes and Cardiometabolic Disease Work Group and a professor of medicine at the University of California San Francisco, to put the FIGARO-DKD results into perspective for practicing clinicians.

“The most important thing for clinicians treating these patients is to realize that patients with diabetes and/or kidney disease are at a high risk for cardiovascular disease, especially the risk of heart failure,” Deedwania said. “FIGARO-DKD did not include heart failure patients in the trial, thus, the reduction in cardiovascular events seen in the study is an important message and powerful message, especially for primary care physicians,” he added.

Unlike other FDA-approved MRAs—spironolactone and eplerenone—finerenone is nonsteroidal and selective, which may give it an advantage. “Spironolactone is only a nickel per pill, and eplerenone is more specific than spironolactone, but in general, MRAs are often not used due to concerns with side-effects,” Deedwania explained. A common concern is risk of hyperkalemia, which was also seen in 10.8% of finerenone-treated patients versus 5.3% of controls, but only 1.2% of finerenone patients discontinued the drug versus 0.4% of controls. By contrast, spironolactone blocks testosterone, leading to gynecomastia in males, which is a greater concern, Deedwania said.

FIGARO-DKD was funded by Bayer AG.