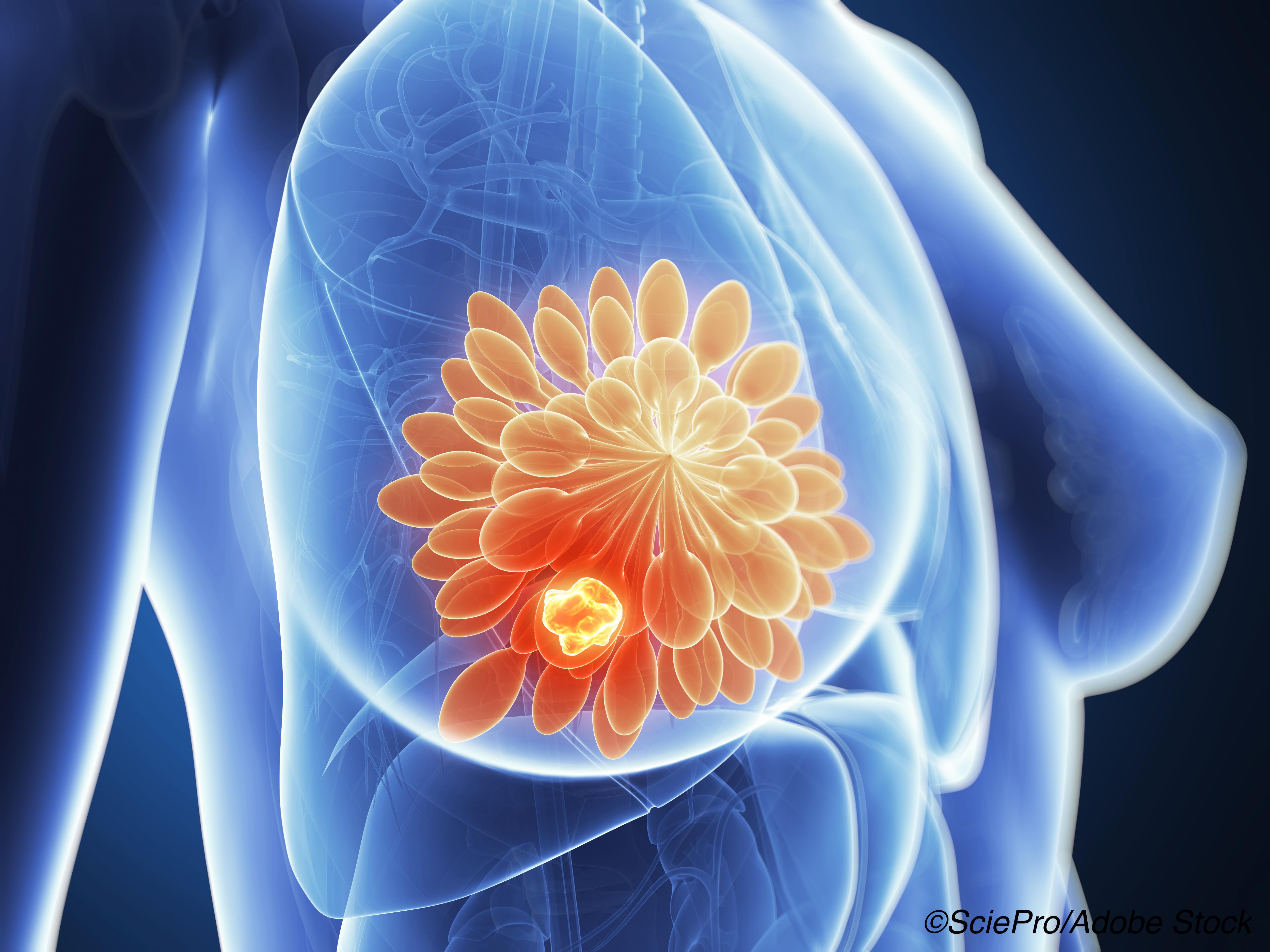 Women with high-risk breast cancer who are taking endocrine therapy to prevent recurrence appeared to improve outcomes with the addition of the cyclin-dependent kinase 4/6 inhibitor abemaciclib (Verzenio), researchers reported at the 2020 virtual meeting of the European Society for Medical Oncology (ESMO).

The risk of developing invasive breast cancer was reduced by 25% over a 2-year period among the patients on abemaciclib and endocrine treatments, compared with women receiving endocrine monotherapy, reported Samuel Johnston, PhD, professor of breast cancer medicine at the Royal Marsden NHS Foundation Trust, London.

In reporting the results of the Monarch E trial, Johnston said 136 of 2,808 patients taking abemaciclib experienced an invasive breast cancer event compared with 187 of 2,829 patients who were just taking endocrine therapy, which translated to a statistically significant relative risk reduction of 25.3% (P=0.0096).

He also reported that distant relapses were experienced by 106 patients on abemaciclib and by 152 patients who were on endocrine therapy alone — a 28.3% decrease in the relative risk of recurrence (P=0.0085).

Johnston said at a press conference that reducing the risk of recurrence was accomplished without unacceptable toxicity. “Safety was consistent with the known profile of abemaciclib,” he said. “Diarrhea was manageable with anti-diarrheal medication and dose adjustments.”

The researchers reported that 463 or 16.6% of patients discontinued abemaciclib due to adverse events, most commonly diarrhea; 306 of these continued on endocrine therapy.

Johnston noted that about 90% of patients with breast cancer are diagnosed with early breast cancer. “While many patients with hormone receptor positive disease will not recur or have distant relapse with standard therapies, about 20% of patients whose cancer has high risk clinical and/or pathological features may experience distant relapse, many in the first 2 years. Novel treatments are needed to prevent early recurrences and distant metastases.”

He said that previous studies have shown that combining abemaciclib with other agents such as fulvestrant improves overall survival. Hence, the researchers wanted to explore the role of abemaciclib in the adjuvant setting.

The Monarch E trial enrolled patients who were diagnosed with hormone receptor positive, HER2 receptor negative, high risk early breast cancer. The researchers defined high risk as those patients who were found to have 4 or more axillary lymph nodes or who had 1-3 axillary lymph nodes meeting at least one of 3 criteria: a tumor size of at least 5 centimeters; a histological grade of 3; and centrally tested Ki67 expression of 20% or greater. Women who were pre or post-menopausal were eligible to enroll in the study. They were also eligible if they had received prior adjuvant or neoadjuvant chemotherapy. The patients had to be free of metastatic disease at baseline to be enrolled in the trial.

“This is the first study to show that adding a cyclin-dependent kinase 4/6 inhibitor to endocrine therapy significantly improves invasive disease free survival in the adjuvant setting,” said Giuseppe Curigliano, MD, PhD, associate professor of medical oncology at the University of Milan, who commented on the study at the press conference. Curigliano is chair of the ESMO Guidelines Committee.

“This is a very important trial and the findings will change practice. Once approved for high risk hormone receptor positive, HER2-negative early breast cancer, the new standard of care for these patients will be to add two years of abemaciclib to endocrine therapy,” he said.

“The safety data are important, particularly the number of patients treated with abemaciclib who had to discontinue or required dose reductions due to side-effects,” said Curigliano. “Adherence to treatment will be an important issue to be considered in the real life population of patients when this treatment is approved and used in clinical practice.”

The study was funded by Eli Lilly and Company.