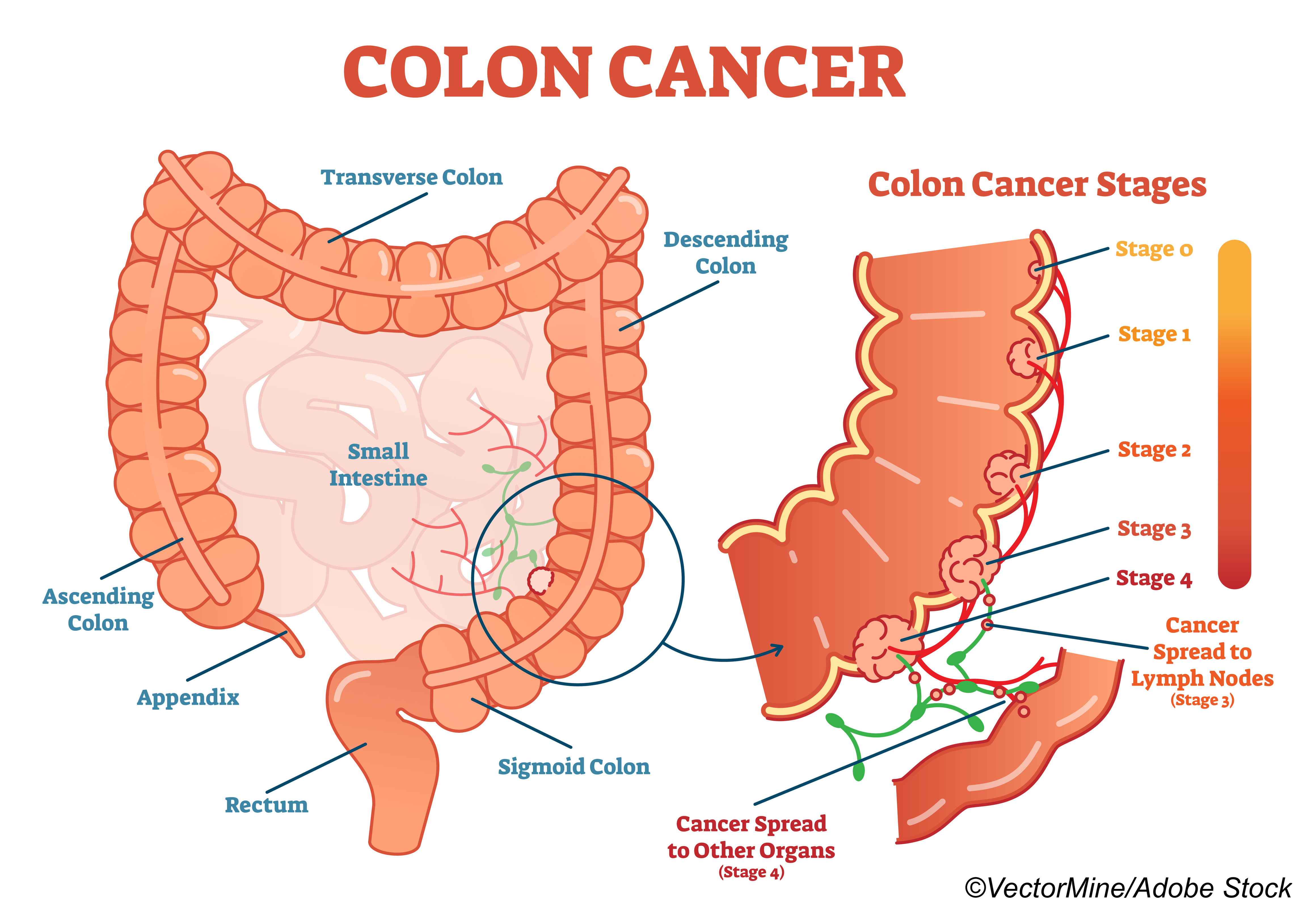 Patients diagnosed with advanced colorectal cancer appear to gain control of their disease if they are treated with a combination of the investigative agent adagrasib and cetuximab—achieving a disease control rate of 100%, researchers reported at the 2021 virtual Congress of the European Society for Medical Oncology.

At the data cutoff for analysis of the trial, 43% of 28 evaluable patients on the combination treatment achieved an objective response to therapy, and 57% had disease stabilization, for a 100% clinical benefit rate after a median follow-up of 7 months, said Jared Weiss, MD, of the University of North Carolina Lineberger Comprehensive Cancer Center, Chapel Hill, North Carolina.

“Adagrasib plus cetuximab showed encouraging clinical activity in heavily-pretreated patients with colorectal cancer harboring a KRAS G12C mutation,” Weiss said in his late-breaking oral presentation at the conference. “Adagrasib is tolerable and has a manageable adverse event profile, both as monotherapy and in combination with cetuximab.”

Weiss noted that in the combination treatment arm, there were two patients with unconfirmed partial responses, and after the data cutoff in July, one of those responses was confirmed, but the other was not, resulting in a 39% response rate.

The median time to response among these patients was at their first assessment—about 1.3 months. “At the time of this analysis, 71% of the patients remain on treatment, so happily it is too early to determine median duration of response or progression-free survival,” he said.

The use of adagrasib as a monotherapy had an attenuated response—an objective response rate of 22% and a clinical benefit rate of 87% among 45 evaluable patients, he said. About 40% of those patients remain on treatment, he said, after a median follow-up of 8.9 months.

The median time to response was 1.4 months, he said, and the median duration of response was 4.2 months. The median progression-free survival was 5.6 months. At 6 months, 42% of the patients remained free from disease progression.

Weiss said that about 3% to 4% of patients with colorectal cancer harbor the KRAS G12C mutation. Adagrasib is a covalent inhibitor of KRAS, has a half-life of more than 24 hours and can penetrate the brain, he said. “Combining adagrasib with cetuximab, an EGFR inhibitor, may enhance inhibition of KRAS-dependent signaling or overcome adaptive feedback to improve clinical outcomes,” he suggested.

In the KRYSTAL-1 trial, Weiss and colleagues enrolled patients whose tumors expressed KRAS G12C mutation. The patients were eligible if they had unresectable or metastatic disease and had no available treatment options.

“The patients were heavily pre-treated,” Weiss said. “Then median number of lines of systemic therapy was 3 in both the monotherapy patients and the combination patients groups.”

Weiss said that phase I dosing studies yielded a recommended dose of 600 mg twice a day for adagrasib. He said the agent is being investigated in lung cancer and other solid tumors as monotherapy and in combinations.

“This is exciting data,” said designated discussant Federica di Nicolantonio, MD, of the University of Torino Candioli Cancer Institute, Italy. She said the response rate was in line with other KRAS G12C inhibitors. “Most importantly, there were no Grade 5 adverse events. The major adverse events are gastrointestinal in nature and adding cetuximab does not worsen the incidence of toxicity, but it does add the skin toxicity often seen with these EGFR inhibitors,” she said.

“The 100% disease control rate is remarkable to me,” di Nicolantonio said. She noted that she has worked in studies with agents used in KRAS G12C-mutated colorectal cancer. She said that it is likely that when the progression-free survival data matures it will be comparable if not better than other treatments being studied for these patients. She noted that multiple studies are investigating combinations of adagrasib and other KRAS G12C inhibitors with other agents.

“What we have learned is that KRAS G12C inhibitor monotherapy had a very low response rate against metastatic colorectal cancer, but when you combine them with an EFGR inhibitor, the response rate is nearly doubled and is in line that what we would expect to see with a combination of sotarasib and panitumumab,” di Nicolantonio said.

“We are eagerly awaiting a phase III trial with adagrasib and cetuximab in second line treatment compared with conventional chemotherapy,” she added.

Di Nicolantonio also suggested that future research should explore more deeply the microbiota of colorectal cancer to determine if other biomarkers can be attacked.

She noted that worldwide there are about 250,000 people a year who die of a KRAS G12C-mutated colorectal cancer, and their survival is about 21 months. Previously, it has been shown that treatment with monotherapy against KRAS G12C-mutated colorectal cancer appears to create a response in the tumor of a feedback loop that can overcome the effect of the anti-cancer agent, but when combined with another agent, that signaling can be inhibited.

The trial was funded by Mirati Therapeutics, Inc.