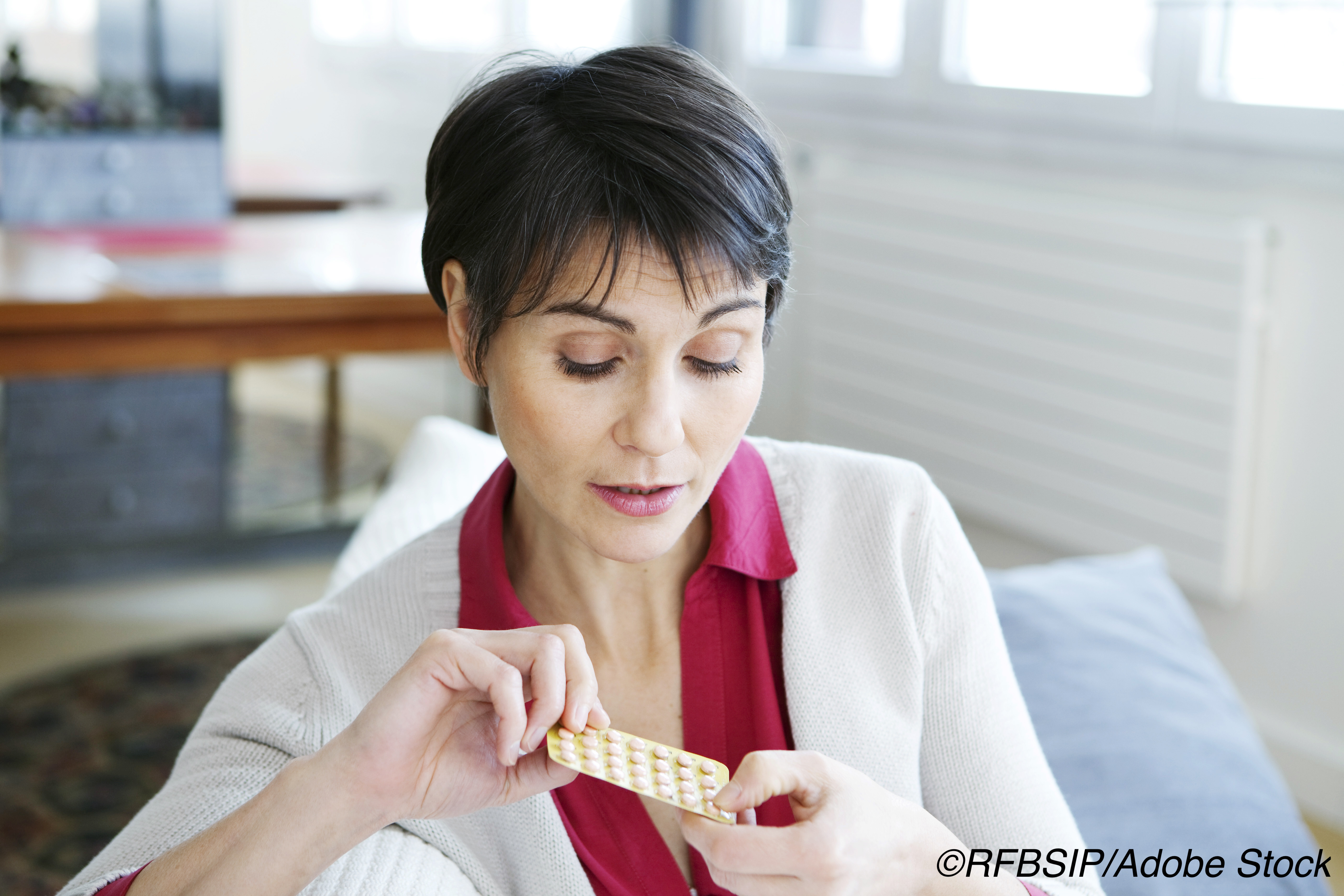 Estrogen-only hormone replacement therapy (HRT) linked with a lower breast cancer incidence, while estrogen plus progestin was tied to a higher disease incidence, according to updated data from the Women’s Health Initiative (WHI).

In over 10,000 postmenopausal women with a prior hysterectomy randomized to a placebo-controlled trial, those who took conjugated equine estrogen (CEE) alone had a statistically significant lower breast cancer incidence at 238 cases (0.30% annualized rate) versus 296 cases in the placebo arm (0.37% annualized rate, hazard ratio 0.78, 95% CI 0.65-0.93, P=0.005), reported Rowan T. Chlebowski, MD, PhD, of The Lundquist Institute for Biomedical Innovation at Harbor-UCLA Medical Center in Torrance, Calif., and co-authors.

“The association of CEE plus MPA with higher breast cancer incidence became statistically significant in year 6 and remained significant subsequently,” they explained.

“Prior use of CEE alone is, to our knowledge, the first pharmacologic intervention demonstrated to be associated with a statistically [significant] reduction in deaths from breast cancer,” they wrote, but use of solo CEE has been shunned because of an associated stroke risk, and the advent of “hormone-targeted drugs with greater influence on breast cancer incidence.”

In an editorial accompanying the study, Christina A. Minami, MD, of Brigham and Women’s Hospital, and Rachel A. Freedman, MD, of the Dana-Farber Cancer Institute, both in Boston, agreed that “many questions still remain on whether (and how) a hormone therapy intervention that occurred many years earlier may continue to affect breast cancer risk and mortality at 20 years.”

They praised Chlebowski and co-authors for their “commitment…to continue collecting long-term data,” but noted that “Even though the assumption is that the innumerable biological, genetic, environmental, clinical, and behavioral confounders that affect risk over time are balanced between treatment groups in a large, randomized clinical trial, it is impossible to isolate the degree of influence of exposure to hormone therapy and subsequent, late outcomes.”

Minami and Freedman added that the suboptimal treatment adherence demonstrated during the intervention phase of the trials also raises questions of the true treatment exposure of these women. The authors reported that during intervention, 54% in the CEE alone arm discontinued therapy as did 42% in the CEE plus MPA arm.

“Nevertheless, the enduring data on the health outcomes associated with unopposed estrogen therapy among women without a uterus remains compelling,” Minami and Freedman stated.

The two randomized placebo-controlled trials enrolled participants from 1993 to 1998, accruing 27,347 postmenopausal women (mean age 63.4 years) from 40 U.S. centers with follow-up through the end of 2017. Mortality information was available for >98% of participants with 20.3 years of median cumulative follow-up.

The CEE-alone trial had 10,739 women with a prior hysterectomy. Of those, 5,310 were randomized to receive CEE (0.625 mg/day) and 5,429 received placebo. The trial was stopped in 2004 after 7.2 years median duration for safety concerns such as the aforementioned stroke risk.

The CEE plus MDA trial had 16,608 women with an intact uterus, and 8,506 were randomized to receive CEE (0.625 mg/day) plus MDA (2.5 mg/day) while 8,102 were on placebo. The trial was stopped in 2002 after 5.6 years median duration due to risks outweighing benefits such as increased cardiovascular disease risk, thromboembolic disease, and breast cancer.

The current study included 424 more breast cancer cases and 36 more deaths from breast cancer than the two other trials, according to the authors.

The authors reported that stronger associations with CEE alone and breast cancer incidence were seen for cancer negative for erythroblastic oncogene B (ERBB2; formerly known as HER2-negative, P=0.05) and these breast cancers were more commonly diagnosed with negative lymph nodes (P=0.05).

CEE alone also was associated with a significantly lower risk of estrogen receptor-positive, progesterone receptor-negative breast cancer (HR 0.44, 95% CI 0.27-0.74), but there were “no significant associations found between use of CEE plus MPA and tumor subtype,” Minami and Freedman stated.

Other study limitations included the fact that that the original trials also only evaluated one dose and one formulation, so the results are not generalizable to other preparations. The authors explained that they conduced gap-time analyses — gap-time referring to “the time between onset of menopause and the initiation of hormone therapy,” according to the editorialists — yet the “numbers were insufficient to rigorously examine the association of initiating CEE alone shortly after oophorectomy, onset of menopause, or both with the risk of breast cancer incidence and mortality,” the authors stated.

They stressed that “Decisions regarding use of any hormone therapy regimen should consider the full range of risk and benefits…involve shared decision-making with the patient, and recognize that risk-benefit balance is altered by additional factors such as age, time from menopause, oophorectomy status, and prior hysterectomy, with some outcomes persisting and some attenuating after stopping use.”

The WHI is supported by the National Heart, Lung, and Blood Institute (NHLBI), the NIH, and the U.S. Department of Health and Human Services.

Minami and Freedman reported no relationships relevant to the contents of this paper to disclose. Role of COVID-19 Treatments Explored in Patients With Cancer