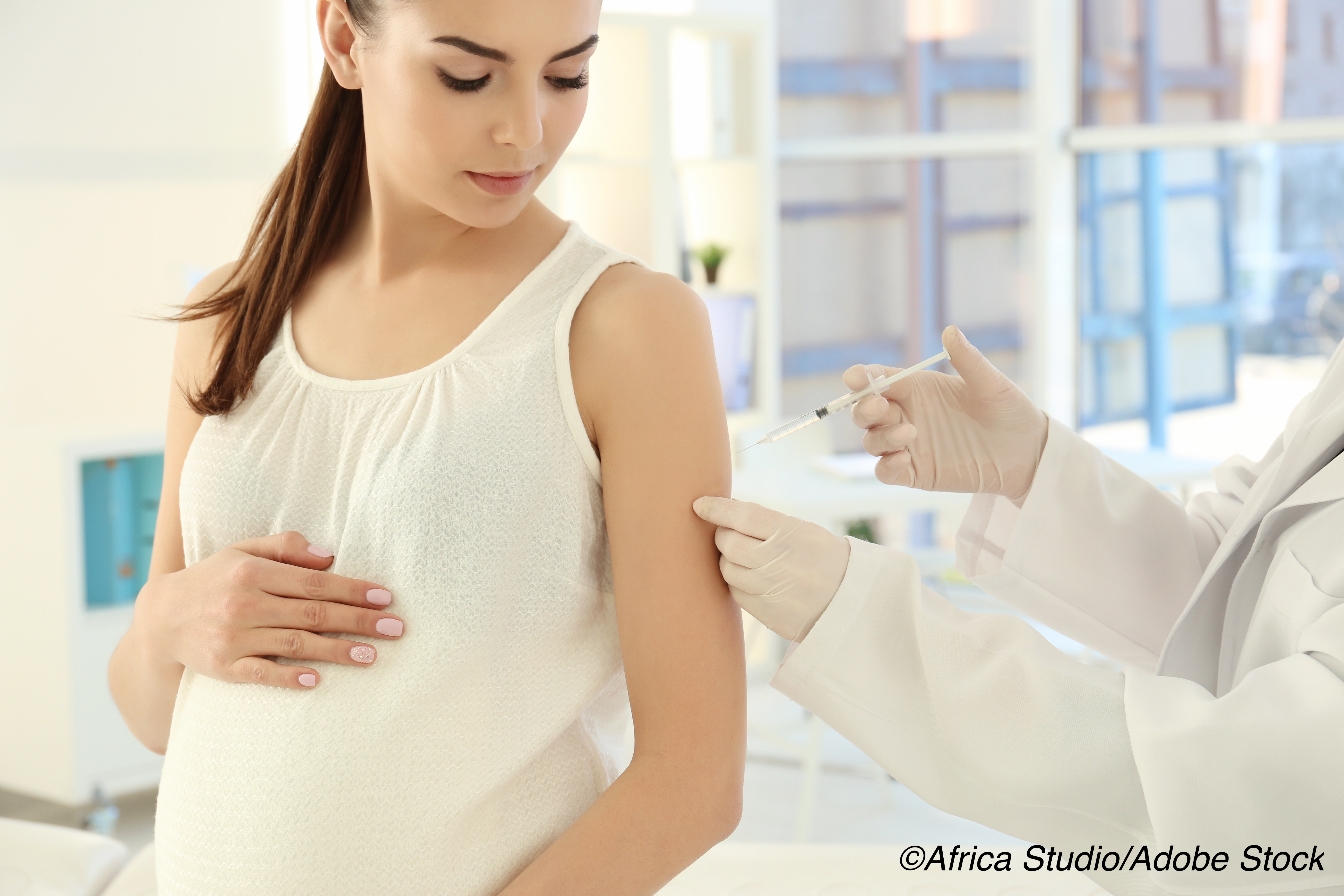 But only nine of over 3,000 studies met the inclusion criteria for a systematic review

Inﬂuenza vaccination during pregnancy was not linked with various long-term adverse health outcomes in infants and young children, researchers reported, although the number of studies that addressed these outcomes was small.

Based on a systematic review, “studies to-date have not revealed any adverse effect of maternal inﬂuenza vaccination on childhood health outcomes during the ﬁrst 5 years,” according to Damien Y.P. Foo, BSc, of Curtin University in Perth, Australia, and co-authors.

However, less than a dozen of more than 3,500 studies evaluated met the inclusion criteria for the study, they noted in Pediatrics.

While one study suggested a possible “increased risk of autism spectrum disorder (ASD) after exposure to seasonal [influenza vaccine] in utero, after adjusting for multiple comparisons using Bonferroni-corrected CIs, [the association was] no longer statistically signiﬁcant,” the authors explained.

While the analysis by Foo’s group was “solid… all the studies that met inclusion criteria originated from North America or Europe, with no data from low- and middle-income countries,” pointed out Flor M. Munoz, MD, of Baylor College of Medicine and Texas Children’s Hospital in Houston, and Sarah S. Long, MD, of Drexel University in Philadelphia, in a commentary accompanying the study.

Thus there is a need for more research on the deployment and safety of maternal ﬂu vaccination globally, especially in low- and middle-income countries, they noted.

Other issues Munoz and Long had with the study was the relatively short follow-up period of 1 to 5 years in vaccine-exposed children, and the fact that the majority of evaluated studies were for the 2009 H1N1 pandemic vaccine, which demonstrated “missed opportunities for the assessment of safety of seasonal vaccines.”

Still, the data from Foo and co-authors are “robust…these ﬁndings should lead providers to offer inﬂuenza vaccines to pregnant women conﬁdently, factually, and in a manner that presumes rather than queries their acceptance of the recommendation,” Munoz and Long concluded.

Foo and co-authors reviewed the literature on early childhood (age <5 years) health associated with exposure to ﬂu vaccines in utero until July 2019. Their search resulted in 3,647 records, of which nine met the inclusion criteria:

Non-English language studies, case studies, and research letters made up some of the exclusion criteria, and some studies were rejected because they did not contain a measurement of flu vaccination during pregnancy or did not report the outcome measure of early childhood health.

“Of the 9 included studies, methodology and study outcomes were highly diverse,” the authors reported. For instance, vaccination status during pregnancy was by self-report in one study and written or electronic health records in three studies.

Among half a dozen studies on the 2009 monovalent pandemic inﬂuenza A virus subtype H1N1 (A/H1N1) vaccines, four only looked at adjuvanted vaccines, according to Foo’s group.

“Given the small number of studies in which similarly deﬁned outcomes were addressed, meta-analyses were deemed not possible,” the authors explained.

They also identified several potential confounders in the nine studies, such as maternal age, ethnicity, place of birth, marital status, use of antenatal care, and the child’s ethnicity.

The authors reported that, for pediatric mortality, “No signiﬁcant associations were identiﬁed in the 2 studies that examined mortality as an outcome.”

Finally, for ASD, one 2017 study found a slightly elevated risk, which did not hold up after adjustment for multiplicity, while another from the same year “found no signiﬁcant association between [influenza vaccines] exposure in utero and autism spectrum disorder,” according to Foo’s group. Unfounded fears of causality between the flu vaccine and ASD has become a tenet in the anti-vaxxer movement.

Munoz and Long reported no relationships relevant to the contents of this paper to disclose.

Co-occurring medical conditions in adults with Down syndrome: A systematic review toward the development of health care guidelines. Part II.

Single layer suturing in intracapsular myomectomy of intramural myomas is sufficient for a normal wound healing.

National Analysis of Perioperative Morbidity of Vaginal Versus Laparoscopic Hysterectomy at the Time of Uterosacral Ligament Suspension.