For mothers with coronavirus, baby’s first coo is over the phone - Physician's Weekly
×

For mothers with coronavirus, baby’s first coo is over the phone 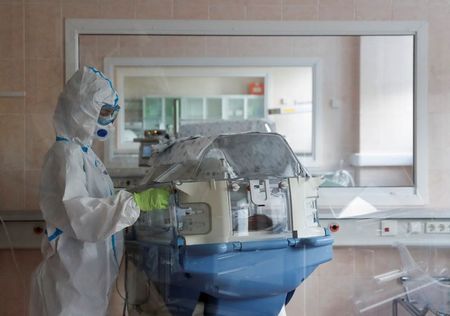 More than 150 babies have been born to mothers with suspected coronavirus infections at Moscow’s City Clinical Hospital Number 15, and the hospital says not a single newborn caught the infection. But to achieve that, the babies are separated from their mothers at birth, breastfeeding is banned, and the mothers are kept quarantined in a ward for two weeks.

Rayhona wore a mask and was hooked up to medical devices, sharing a room with another new mother also suspected of carrying the virus.

The mothers “are admitted with some respiratory distress already and we need to be very professional to determine when to deliver the baby and how to deliver it,” the hospital’s head doctor, Valeriy Vechorko, told Reuters. “I can say this for sure – we did not have a single transmission of the virus to a baby.”

Until they are released from quarantine, mothers can communicate with their new babies only via video calls.

The mothers “are scared – more scared than usual at least – as they are worried not only about themselves but about their baby as well,” said hospital cardiologist Olga Lapochkina.

“We try to keep mothers in touch with the babies via video links. Doctors show them and it really helps.”