TBILISI (Reuters) – Georgia banned passenger traffic on its domestic railway on Monday to try to prevent the spread of the coronavirus.

Government spokesman Irakli Chikovani said the ban would be in force until a state of emergency ends on April 21.

The country of 3.7 million in the South Caucasus has reported 61 cases of the coronavirus as of Monday, with no deaths. Eight patients have recovered from the virus.

Georgia has also locked down the two southern regions of Marneuli and Bolnisi bordering Azerbaijan after a woman was diagnosed with the COVID-19 respiratory illness that can be caused by the coronavirus attended a wake.

Georgia declared a one-month state of emergency on Saturday, banning gatherings of more than 10 people.

The former Soviet republic has also closed its borders, imposed a ban on all foreign citizens entering the country and halted air traffic with other countries.

It has also shut all educational institutions, closed all shops except grocery stores, pharmacies and petrol stations, and closed winter resorts, restaurants, cafes, nightclubs and gyms.

Neighbouring Armenia expanded a list of countries on Monday whose citizens are barred from entering the country. Armenia has reported 194 cases of coronavirus, the highest number in the South Caucasus region. Two patients recovered.

Azerbaijan, another South Caucasus country of around 10 million, on Monday imposed restrictions on entry and exit from the capital Baku, the city of Sumgait and the region of Absheron Peninsula except for ambulances and freight trucks, the government said.

The government had also banned all passenger traffic across the country, gatherings of more than 10 people with a distance of 2 metres from each other.

City residents are recommended to use buses or taxes instead of metro, while those, who are over 65 years, are banned from leaving houses. The government will provide them with a social assistance.

Azerbaijan has reported 72 cases of coronavirus as of Monday, with one death.

(Reporting by Margarita Antidze in Tbilisi, Nvard Hovhannisyan in Yerevan and Nailia Bagirova in Baku; Editing by Timothy Heritage and Lisa Shumaker) 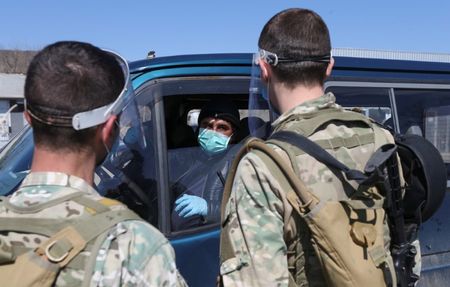