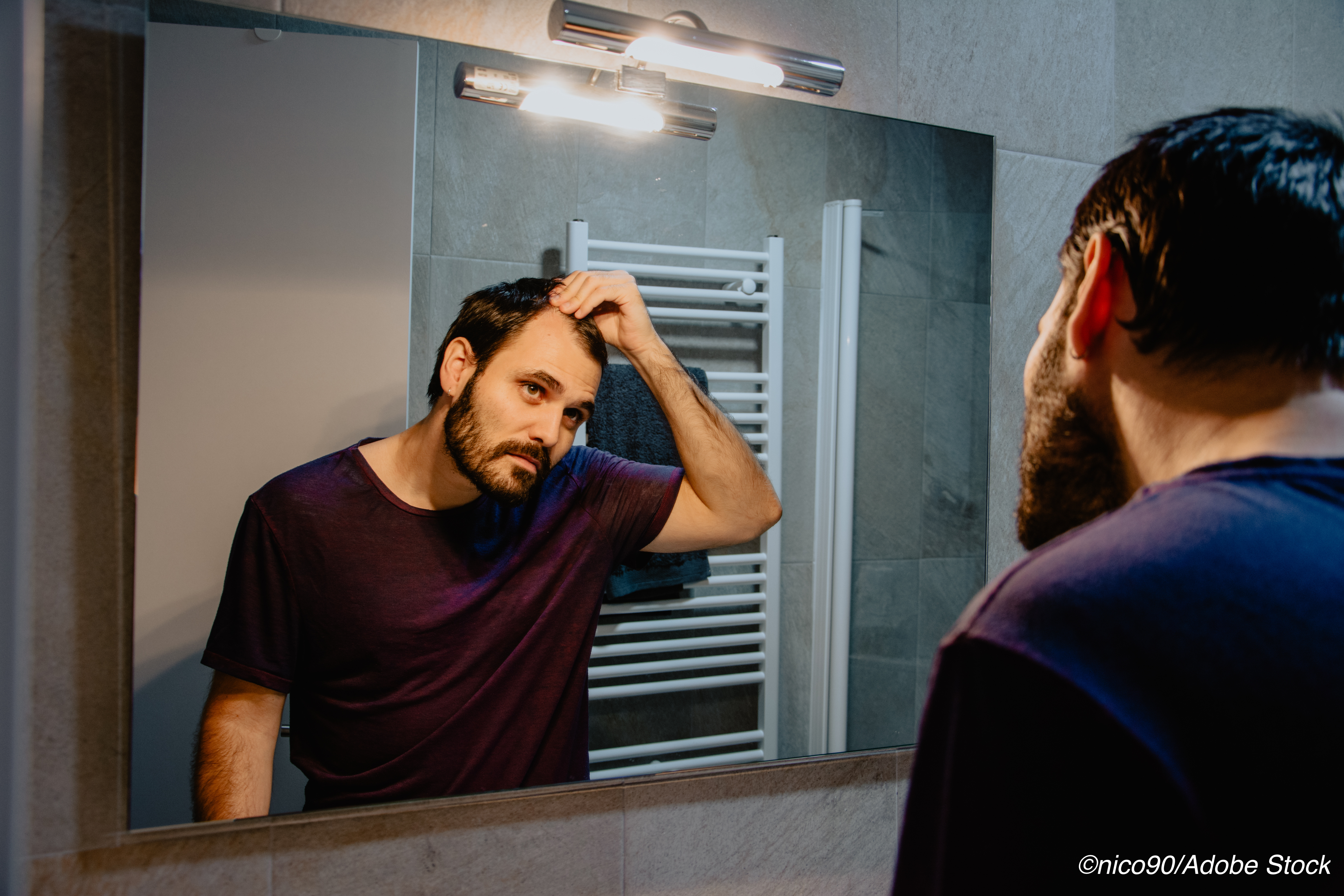 Clinicians should consideration risk of depression, suicidality, and anxiety in young men taking the drug

Using validated pharmacovigilance methods to assess data from the World Health Organization’s global drug safety case report database VigiBase, researchers found signals for suicidality in mostly young, male adults taking the alopecia and enlarged prostate drug finasteride (Propecia). The researchers noted that depression, anxiety, and suicidality risks should be determined when prescribing the drug to younger men who may be more sensitive to the drug’s adverse side effects.

In a stratified analysis, the signals were not seen in older patients taking finasteride for benign prostatic hyperplasia, but they were seen in men younger that age 45 years taking the drug for androgenetic alopecia.

The disproportionality signal for suicidality in finasteride users was driven by reports of suicidal ideation and psychological adverse events, including depression, but no signal for attempted or completed suicide was seen in the study, published online Nov. 11 in JAMA Dermatology.

Since its FDA approval for the treatment of male-pattern baldness in 1997, reports of possible adverse events related to its use have plagued finasteride, wrote researcher Quoc-Dien Trinh, MD, of Brigham and Women’s Hospital, Harvard Medical School, Boston, and colleagues.

“Reports of suicidality and psychological adverse events related to finasteride have led to coining of the term post-finasteride syndrome and the creation of organizations such as the Post-Finasteride Syndrome Foundation,” they wrote, adding that in 2011 a postmarketing report was sent to the FDA suggesting that use of the drug may be linked to depression, self-harm and suicide.

“There is a plausible biological basis linking finasteride, a 5α-reductase inhibitor (5ARI) with depression and anxiety,” Trinh and colleagues wrote. “Some reports suggest that men with depression have lower levels of the neurosteroid allopregnanolone, which is produced by the 5α-reductase enzyme and has antidepressant and anxiolytic effects. Broader clinical context, however, is lacking for this association.”

They added that studies examining the use of finasteride and suicidality are limited, with a large cohort study of older men taking the drug for enlarged prostate showing no association. Use of the drug was associated with a signal for self-harm in this population, however.

An analysis of the FDA’s adverse Event Reporting database did show disproportional reporting of suicidal ideation among men using the drug for alopecia, but the sample size was just 39 men.

In their pharmacovigilance study, Trinh and colleagues used disproportionality analysis (case-non-case design) to look for signals of adverse reactions recorded in VigiBase.

Reporting odds ratio (ROR), which is a surrogate measure of association in disproportionality analysis, was used to examine the strength of the association.

Sensitivity analyses involved stratifying by indication (BPH and alopecia) and age (≤45 and >45 years); comparing finasteride signals with alternative drugs with different mechanisms but used for similar indications (minoxidil for alopecia and tamsulosin and hydrochloride for BPH); comparing finasteride with a drug with a similar mechanism of action and adverse event profile (dutasteride); and comparing reports of suicidality before and after 2012.

“Taken together, our findings suggest that disproportional reporting of suicidality and psychological adverse events in association with finasteride use could potentially be attributed to unique characteristics of the drug in young patients with alopecia,” Trinh and colleagues wrote.

They noted that the disproportional signal of adverse events in finasteride users, such as persistent sexual dysfunction, might have a greater impact on younger patient. In a recently published case report of 6 men who took finasteride for alopecia and later took their own lives, all 6 experienced persistent sexual dysfunction after stopping the drug.

In an editorial published with the study, dermatologist Roger S. Ho, MD, of NYU Grossman School of Medicine, New York City, wrote that limitations inherent in studies like the one by Trinh and colleagues necessitate caution when interpreting results. The most significant of the “cautionary points” raised by Ho was reporting bias.

“The quality and quantity of reports in these databases can be influenced by reporting behavior, such as false reports submitted by patients who are dissatisfied or involved in litigation, or stimulated reporting affected by mass media,” Ho wrote.

The fact that no signal for suicidality was seen in the study for the drug dutasteride, which has a similar mechanism of action to finasteride, suggests that reporting biases exists, he noted.

“Considering that the publication of the first clinical study suggesting an association between suicidality and finasteride, the founding of the Post-Finasteride Syndrome Foundation, and the start of Google Trends showing an increase in searches for ’post-finasteride’ all took place in 2012, their ultimate stratified analysis showing a significant signal after 2012, but not before 2012, supports the potential presence of a reporting bias or stimulated reporting accounting for the observed suicidal signal for finasteride,” Ho wrote.

Ho noted that while causal inferences cannot be drawn from the pharmacovigilance study, “one should also not dismiss the plausibility that certain characteristics of finasteride may precipitate or potentiate psychological morbidities unique to the younger population that has alopecia.”

“Health care professionals should keep themselves abreast of these potential signals and, accordingly, conduct a full evaluation and a detained, personalized risk-benefit assessment for patients before each prescription of finasteride,” Ho wrote, concluding that “in the age of patient-centered care and shared decision making, it is paramount to educate patients appropriately regarding what is known and not known about finasteride, so that patients can make the best and most informed decision regarding their care.”

This research was funded by the Defense Health Agency and the Vattikuti Urology Institute.