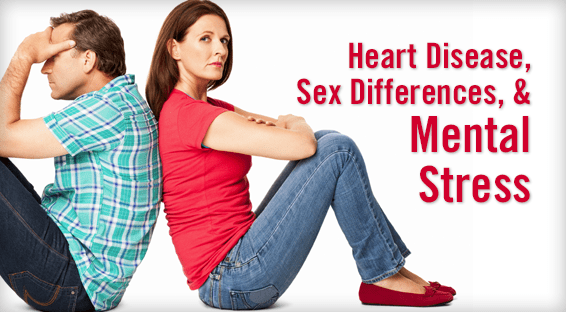 Clinical research has demonstrated that there is a relationship between mental stress and cardiovascular diseases, including ischemic heart disease (IHD). Studies indicate that emotional stress is associated with IHD and has been linked to clinical events, but few investigations have explored sex-specific differences in the psychobiological responses to mental stress.

To address this research gap, Zainab Samad, MD, MHS, and colleagues had a study published in the Journal of the American College of Cardiology that examined differential psychological and cardiovascular responses to mental stress between men and women with stable IHD. For the analysis, 254 men and 56 women with stable IHD underwent psychometric assessments, transthoracic echocardiography, and platelet aggregation studies at baseline and after three mental stress tasks, which included 1) a math test, 2) a mirror tracing test, and 3) an anger recall test.

Most baseline characteristics were similar between women and men with known IHD, including heart rate, blood pressure, and left ventricular ejection fraction (LVEF). However, women were more likely to be non-white, living alone, and unmarried. They also had higher levels depression and anxiety at baseline. At rest, women had higher platelet aggregation responses to serotonin and epinephrine than men.

The investigators defined mental stress-induced myocardial ischemia (MSIMI) as the development or worsening of regional wall motion abnormalities, reductions of LVEF to 8% or lower, and/or ischemic ST-segment changes on electrocardiogram during one or more of the three mental stress tasks. “Women had more MSIMI than men and expressed more negative emotions and fewer positive emotions while doing the stressful tasks,” says Dr. Samad. Women were also more likely to experience decreased blood flow to the heart and to have higher collagen-stimulated platelet aggregation responses. Men were more likely to show changes in traditional physiological measures, such as blood pressure and heart rate.

Results of the study suggest that stress triggers physical and mental reactions in women and men with IHD but affects their cardiovascular health in different ways, according to Dr. Samad. “It’s important for clinicians to recognize these differences when evaluating and treating patients because these factors can affect outcomes,” she says.

Studies are needed to test the association of sex differences in cardiovascular and platelet reactivity in response to mental stress and long-term outcomes. The study also underscores the inadequacy of available risk prediction tools. Many tools fail to measure an entire facet of risk, such as the impact of negative physiological responses to psychological stress in both sexes. “Psychological and mental stress need to be incorporated into risk stratification models,” Dr. Samad says. “In addition, we need to explore coping mechanisms for mental stress and seek out targets for medical therapies that further protect the heart.” Zainab Samad, MD, MHS, has indicated to Physician’s Weekly that she has received grants/research aid from the American Society of Echocardiography. The dosage-dependent effects of cevimeline in preventing olanzapine-induced metabolic side-effects in female rats.