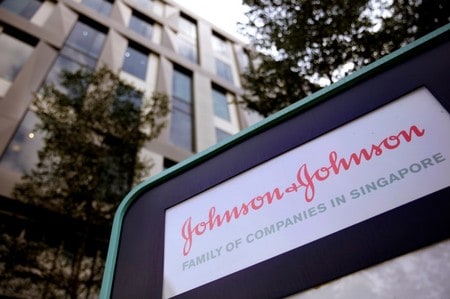 The healthcare conglomerate also expressed confidence that last week’s finding by a Missouri jury that J&J’s talc-based products caused cancer, and an order to pay a record $4.69 billion to defendants, would not stand.

“We are confident that there are multiple grounds for reversal of this jury verdict and that, ultimately, the case will be reversed,” Chief Executive Alex Gorsky said on a call with analysts. He said the products do not contain asbestos or cause ovarian cancer.

Morningstar analyst Damien Conover said he expects J&J to be aggressive in fighting these lawsuits, “and the final related payments will not cause a major impact to its valuation.”

J&J shares were up 3.2 percent at $128.70 after earlier climbing as much as 4.6 percent – the biggest one-day percentage gain in over two years.

Gorsky acknowledged that sales growth in the consumer products division and some segments of medical devices were disappointing. New drugs and those in development “position us well to outgrow the market for many years to come,” he said.

J&J said overall net prices of its drugs would be about 4.5 percent lower this year after rebates and discounts. It did not say anything about lowering list prices of its medicines.

When looking for potential solutions, Gorsky said: “We need to be extremely careful and cognizant about avoiding unintended consequences which may … decrease patients’ access to affordable and quality health care.”

Excluding items, the company reported a profit of $2.10 per share, beating analysts’ average estimate by 3 cents.

Sales of Stelara for psoriasis and other autoimmune diseases jumped 36 percent to $1.34 billion, while sales of prostate cancer drug Zytiga surged 63 percent to $909 million.

The company said it does not expect generic competition for Zytiga this year.

New psoriasis drug Tremfya was off to a strong start, taking in $126 million, above analysts’ estimates of about $70 million.

(Reporting by Manas Mishra in Bengaluru; Editing by Sriraj Kalluvila and Bill Berkrot)