Latest on the worldwide spread of the new coronavirus 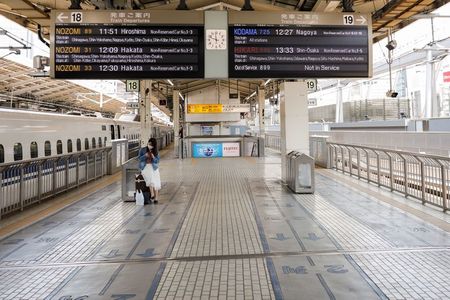 (Reuters) – More than 3.21 million people have reportedly been infected by the novel coronavirus globally, and 227,864 have died, according to a Reuters tally as of 1400 GMT on Thursday.

* Italy’s prime minister said he would gradually relax the country’s lockdown taking into account differences in contagion levels in different parts of the country.

* The United Kingdom’s COVID-19 death toll is probably higher than 27,241, making it one of the worst-hit countries in Europe, opposition Labour Party leader Keir Starmer said.

* The pandemic is fuelling extremism on the far-right and far-left in Europe and giving Islamic State and other militants cover to regain influence, the European Union’s counter-terrorism chief has warned.

* Ukraine reached 10,000 cases on Thursday and its health minister urged people not to violate lockdown measures.

* Slovakia will consider letting shops reopen sooner as its daily tally of infections has dropped to single digits and the numbers of recovered patients is outpacing new ones, its prime minister said.

* Leading privacy advocates in Britain have urged the government to prevent a soon-to-be launched COVID-19 contact tracing app from turning into a form of state surveillance.

* A town in southern Sweden has turned to a traditional source to try to prevent the coronavirus spreading during an annual festive event on Thursday – chicken manure.

* Florida’s governor, among the last to lock down his state, said he would permit a limited economic reopening next week while leaving restraints intact for the dense greater-Miami area.

* Some contract workers in America’s fast food restaurants, hospitals and warehouses could find it harder to demand equipment and other measures to protect themselves from the coronavirus under a new labor agency rule, according to workers’ advocates and unions.

* About two dozen migrants deported from the United States to Colombia last month have tested positive.

* The International Monetary Fund approved $650 million in emergency financial assistance to help the Dominican Republic respond to the coronavirus pandemic.

* Deaths from the outbreak have piled up so fast in the Amazon rainforest’s biggest city that the main cemetery is burying five coffins at a time in collective graves.

* Mexican tomato farmers are so hard pressed to sell their product due to the disruptions that they have had to donate some of their produce to food banks or use it to feed cattle.

* Latin American drug lords have sent bumper shipments of cocaine to Europe in recent weeks, including one in a cargo of squid, even though the pandemic has stifled legitimate transatlantic trade, senior anti-narcotics officials say.

* China has cancelled the 2020 Boao Forum for Asia, which Beijing is trying to promote as the region’s answer to Davos.

* South Korea on Thursday reported no new domestic cases for the first time since February, the Korea Centers for Disease Control and Prevention said.

* Japan is preparing to extend its state of emergency, originally set to end on May 6, for about a month, government sources told Reuters.

* Indonesia confirmed 347 new infections on Thursday, taking its total to above 10,000.

* Thailand will start reopening on Sunday some businesses, such as outdoor markets, barber shops and pet groomers, after the numbers of new infections dropped into single digits this week.

* As the pandemic empties bazaars that have long dominated Uzbekistan’s food trade, supermarkets are driving into the vacuum.

* Yemen reported multiple infections and deaths for the first time and an official in the southern port of Aden said the number of cases was very likely to increase in the coming days.

* The World Health Organization is worried by the community spread of the coronavirus in a significant number of West African countries, the regional head of the organization said.

* In Kibera, Kenya’s largest slum, hairdressers have created a new hairstyle, designed to emulate the prickly appearance of the virus under a microscope.

* World stocks suffered a slip on their way to record monthly gains on Thursday, as the European Central Bank held back from providing another instant hit of stimulus and millions more Americans filed unemployment claims. [MKTS/GLOB]

* France suffered its sharpest economic contraction since records began in 1949 in the first quarter, as a coronavirus lockdown from mid-March left shops shuttered and consumers hunkered down at home.

* A sudden stop in tourism caused by border closures and lockdowns will cause a 6.2% contraction of the Caribbean economy in 2020, the deepest recession in over half a century, the IMF said.

* Preventing an increase in soured bank loans is a top priority for Greece as it grapples with the economic fallout, its prime minister said.