MGUS Patients at Risk for Progression to Multiple Myeloma 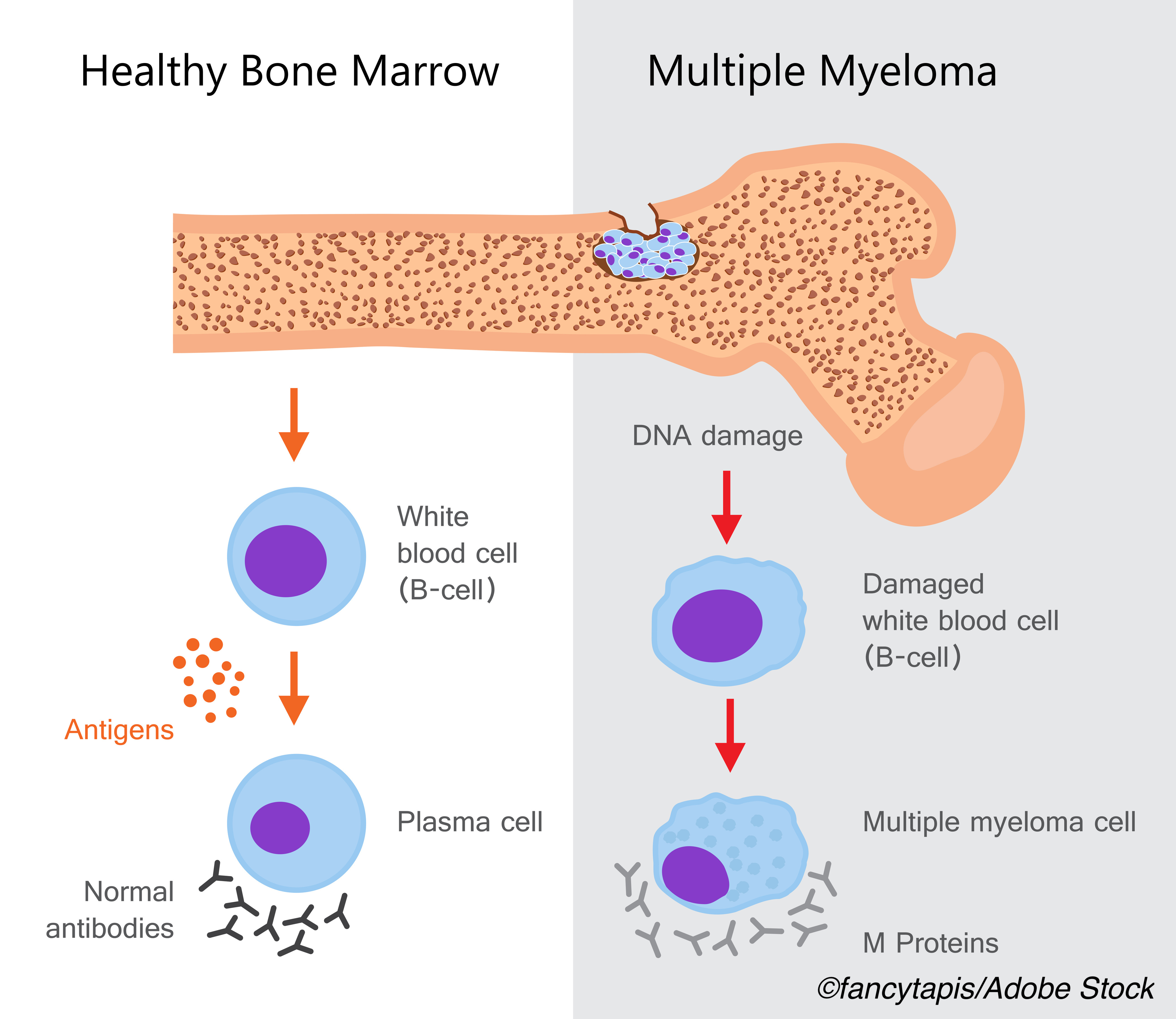 The prevalence of concomitant chronic inflammatory rheumatic diseases (RDs) is high in patients with monoclonal gammopathy of undetermined significance (MGUS), as is the risk for disease progression and transformation to multiple myeloma (MM), according to a recent study in Blood.

Researchers found that MGUS patients with chronic non-Ab—mediated RDs have double the risk of progression to MM and suggested that comorbidities should be included in currently used MGUS scores in managing these patients.

Normann Steiner, MD, of the Medical University of Innsbruck, Austria, and colleagues detailed the basis of their study.

“MGUS, a premalignant condition, is associated with various chronic inflammatory RDs and is frequently observed as an incidental finding during routine work-up. The association of MGUS and chronic RDs is well established, but the impact of RDs on the risk of transformation into overt multiple myeloma (MM) has not been evaluated so far,” Normann Steiner, MD, of the Medical University of Innsbruck, Austria, and colleagues explained.

MGUS is asymptomatic and characterized by “an increase of the immunoglobulin (Ig) fraction with an inherent risk of progression to MM or other related hematologic malignancies. According to epidemiological studies, MGUS affects up to 3.2% of people older than age 50 years, whereas the overall risk of progressing to MM or any other related diseases is 1% per year,” they added.

For this study, Steiner and colleagues identified 2,935 MGUS patients and screened them for concomitant RDs, which they grouped into antibody (Ab)-mediated and non-Ab-mediated. Non-Ab-mediated RDs included polymyalgia rheumatic, large-vessel giant cell arteritis, spondyloarthritis, and gout.

Patients were followed for a median of 3.2 years and a maximum of 33.7 years, and 4.5% progressed. Six percent of patients with MGUS-RD had MM or other lymphoproliferative disorders, as did 4% of those without rheumatic comorbidity.

Upon risk stratification using measures of myeloma protein concentration, immunoglobulin type, and level of free light chair ratio, Steiner and colleagues found that the 57 patients with non-Ab-mediated RDs had the highest risk of progression to MM (HR: 6.8; 95% CI: 1.5-30.7; P=0.01) compared with the 77 patients with Ab-mediated RDs.

When they stratified patients into three risk groups assessed according to M-protein concentrations, Ig type, and levels of serum free light chain ratio, patients in the high- and intermediate-risk groups (at least two risk factors) had a two-fold risk of progression compared with those in the low-risk group (HR: 2.0; 95% CI: 1.4-3.0; P<0.001).

In this analysis, Steiner et al also found the following:

Interestingly, patients with MGUS-RD had a significantly better overall survival (OS) compared with those who had only MGUS (HR: 1.5; 95% CI: 1.1-2.0; P<0.01). At 10 years, survival the survival rate for MGUS-RD patients was 75%. while 75% of MGUS patients survived only 5.6 years. The estimated mortality risk within the first year after diagnosis was 7% in MGUS-RD patients, compared with 13% in MGUS patients.

“In our study, MGUS-RD patients revealed a significant superior OS when compared with MGUS patients. Close follow-up of MGUS patients because of concomitant diseases such as RDs positively influenced the disease course regarding the outcome of MM because of early diagnosis and medical interference, which might also explain our findings,” noted Steiner et al.

“Here we provide compelling evidence that chronic inflammatory RDs have an impact on the disease biology of MGUS by modulating the risk of transformation, which resulted in a twofold increased probability for the development of MM or related lymphoproliferative malignancies in non-Ab–mediated RDs when compared with the MGUS cohort without RDs. Our results fit well with recent advancements that emphasize chronic inflammation as a cancer risk factor and as an additional cancer hallmark,” concluded Steiner and colleagues.

Study limitations include its retrospective design and incomplete characterization of MGUS-RD patients, as well as the lack of data on patient medical histories and disease-related outcomes.

Steiner reported no conflicts of interest.