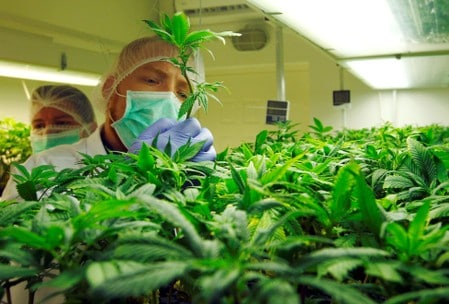 STIP, North Macedonia (Reuters) – Slave Ivanovski was among North Macedonia’s biggest exporters of tomatoes and peppers until two years ago he switched to growing cannabis for medical use.

The country legalised the growth of cannabis for medicinal purposes in 2016, joining a growing number of countries to have done so or be about to do so, such as Britain, Greece, Thailand and some U.S. states.

“This is a very profitable business, which does not require a lot of hard work and has a future,” Ivanovski told Reuters standing by a large cannabis plant in his greenhouse in Stip, south east of the capital Skopje.

Since 2017, North Macedonia has issued 28 licences for growth and production of cannabis oil and another 15 companies are waiting for permits. But so far very little has been produced and no exports have been made as producers hone their skills.

Ivanovski, who invested 10 million euros in buying land and technology, says achieving the required quality is the main challenge. He aims one day to export to Germany and Poland and will need to meet international standards.

Skopje is also changing the law to allow exports of cannabis flower.

“We expect the cannabis industry could generate as much as one percent of national output,” Venko Filipce, the country’s health minister told Reuters.

North Macedonia is one Europe’s poorest countries. Agriculture accounts for nearly eight percent of its national output, and ten percent of exports.

The government has ordered that a four metre-high wire fence topped with cameras must surround cannabis crops, which are also watched by security guards. Plants are indoors – either in halls or greenhouses.

“People thought it would be easy money and have invested in growing cannabis. But later they realised that the technology is costly and that expensive certificates are required,” said Konstantin Dukovski of the Association of Producers.

To promote the industry Prime Minister Zoran Zaev met with a U.S. businessman Michael Straumietis, who founded a company, Advanced Nutrients, specialising in nutrients for plants.

“Let me tell you, this country has huge potential, and I’m excited to be a part of turning Macedonia into one of Europe’s first Cannabis Superpowers,” Straumietis wrote on Instagram.

One North Macedonian cannabis producer, NYSK, is growing cannabis in the halls of an old chemical plant outside Skopje.

The air, water and soil all needed to be purified so the plants could be grown in sterile conditions and produce a medicine-grade crop.

“The industry is very specific, it has many secrets,” Sasho Sefanoski, chief operating officer of NYSK said. “Macedonia is good (to invest in) because resources are not as expensive as in other countries.”

According to a report by Imarc, the global medical cannabis market could rise in value to $44 billion by 2024, from an estimated $13.4 billion in 2018.

Goran Andreski, a mechanical engineer bought land and is trying to set up production.

“People rushed in to invest because there is a long tradition of agriculture, but this business has nothing to do with agriculture, it is more pharmaceutical,” he said.

“The only guideline we got from the government is how tall the fence should be, everything else we have to figure out ourselves.”