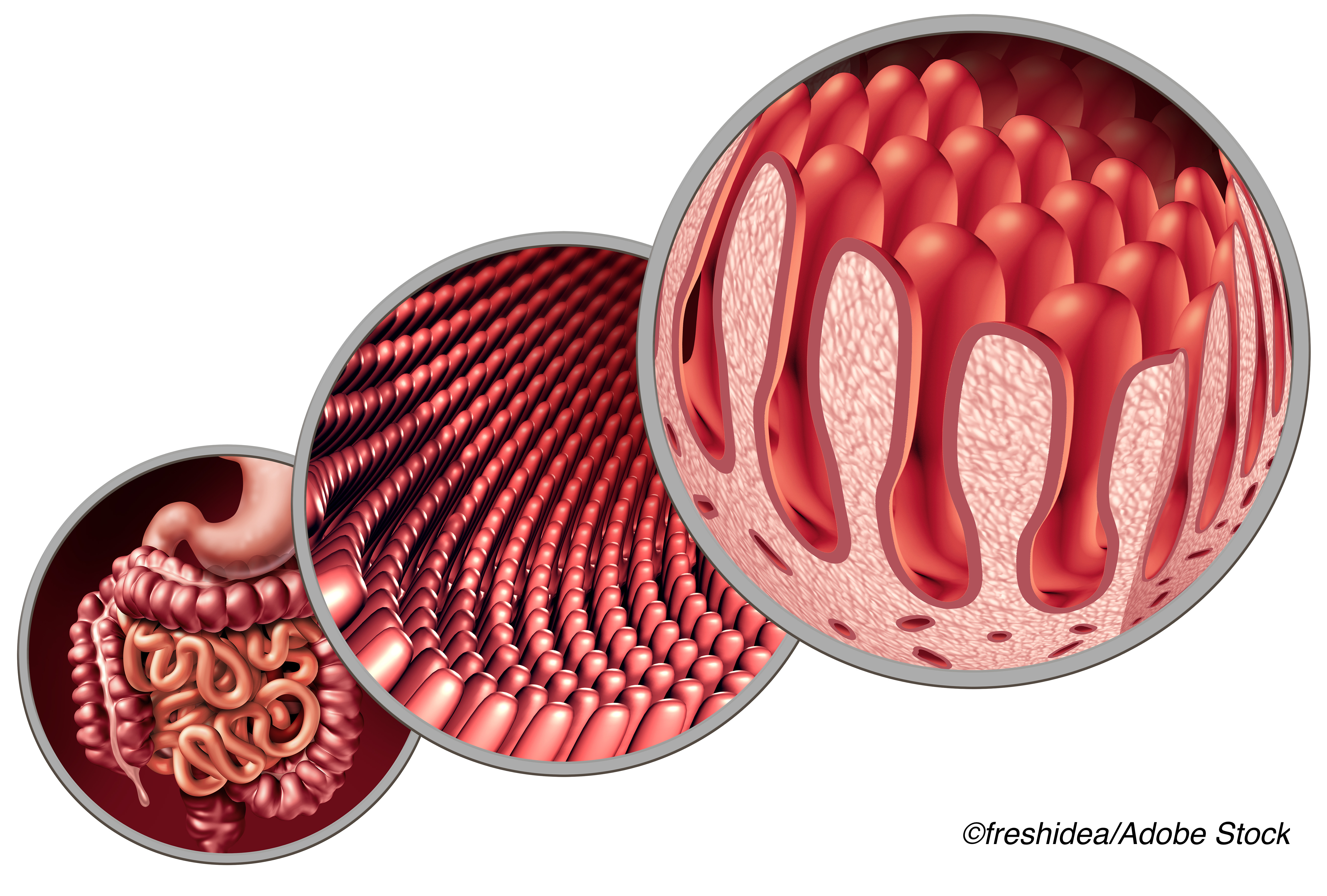 According to their report, published in The New England Journal of Medicine, the estimated difference from placebo in the change in the mean ratio of villus height to crypt depth from baseline to week 6 was:

Participants also saw a change in intraepithelial lymphocyte density with the study drug versus placebo, the authors reported:

“Use of the 100-mg dose may have improved symptom and quality-of-life scores”, according to Schuppan’s group, and overall, “ZED1227 inhibits transglutaminase 2 with high specificity and prevents the formation of deamidated gluten and, putatively, the initial steps of gluten-induced T-cell activation.”

“You can compare [gluten] to a dangerous bug. In celiac disease, the intestinal immune system does not recognize gluten as a harmless food, which it normally is, but as a dangerous bug, and the tTG makes it worse by causing a better fit of the bug to the immune system,” Schuppan explained in a 2018 Beyond Celiac article.

Currently, a gluten-free diet is the only treatment for celiac disease, but that approach has its limitations.

“The need for the development of an adjunct treatment to the gluten-free diet is supported by the difficulties in strictly excluding gluten from the diet and by the lack of mucosal healing that has been observed in 40% of adults with celiac disease who maintain a gluten-free diet,” wrote Bana Jabri, MD, PhD, of the University of Chicago in an accompanying editorial.

Other potential celiac disease therapies include an engineered form of bacterium Lacotococcus lactic and larazotide, a tight junction regulator with an FDA fast track designation currently in a phase III trial.

In a 2019 Frontiers in Pediatrics review, researchers at the All India Institute of Medical Sciences in New Delhi, offered an overview of the mechanisms of action for various investigational therapies for celiac disease, such as genetically modified wheat, oral glutenases, and polymeric binders. As for tTG2 inhibitors such as ZED1277, they “have demonstrated good solubility and stability in gastrointestinal conditions… These three compounds covalently bind to active site cysteine of tTG-2… The guiding principle in the applicability of the above inhibitors is that they should attain in the lamina propria, a sufficient concentration without inhibition of other members of the transglutaminase family,” they wrote.

For the current phase II, dose-finding trial, the authors enrolled 163 patients at 20 European sites and assigned them to the various ZED1227 dose groups or to placebo. Patients (age around 40; all White), had to have a biopsy-confirmed diagnosis of celiac disease at least 12 months before study screening and had to be positive for HLA-DQ2 or HLA-DQ8 genotypes, which can predispose individuals to celiac disease.

The authors noted that celiac disease is highly prevalent in White populations, and that “the patients in our trial represented the ancestral cross-section of the European countries participating in the trial; there was no intention to include or exclude certain racial or ethnic groups from the trial.”

Other inclusion criteria were successful adherence to a gluten-free diet for at least 12 months, negative serologic testing for tTG2 IgA, and a mean ratio of villus height to crypt depth of ≥1.5.

The majority of patients in all groups had adequate duodenal biopsy samples for the assessment of the primary endpoint of “the attenuation of gluten-induced mucosal damage, as measured by the ratio of villus height to crypt depth,” the authors wrote. They noted that 10-mg dose group was 90% women. The trial was done from May 2018 to February 2020.

They noted that “improved patient-reported outcomes across the dose groups need to be confirmed in a larger study, since they may reflect the rather small size of each group for the evaluation of symptoms or the scales capturing some symptoms that may overlap with, but are unrelated to, celiac disease.”

The most common adverse events (AEs) across all group were headache, nausea, diarrhea, vomiting, and abdominal pain. Rash developed in 8% of patients in the 100-mg group. The authors explained that most of the AEs seemed to be related to the gluten challenge. Serious AEs potentially related to ZED1227 or placebo occurred in two patients (one case of migraine with aura in the 50-mg group and one case of ventricular extrasystoles in the placebo group), but resolved with discontinuation of the all agents.

“ZED1227 is the first nondietary treatment that has preliminarily shown the capacity to prevent mucosal damage in persons with celiac disease. Although this trial is very encouraging, whether treatment with ZED1227, and more generally transglutaminase 2 inhibition, in patients with celiac disease will be efficient in real life and during long-term gluten exposure remains to be determined,” wrote editorialist Jabri.

“On the whole, this proof-of-concept trial raises the possibility that strategies targeting post-translational modifications of self-antigens may be effective in autoimmune diseases such as rheumatoid arthritis, in which antibodies against citrullinated self-antigens are present,” she concluded.

Study limitations included the loss of several patients to follow-up, the short trial duration, and the controlled gluten ingestion.

The authors concluded that their findings support the role of tTG2 in the pathogenesis of celiac disease, and that “ZED1227 targets the intestinal mucosa predominantly and thereby mediates protection; thus, it is unaffected by the complexity of the food matrix and is less dependent on the timing of ingestion of gluten-containing food.”

The study was funded by Dr. Falk Pharma. Some co-authors are company employees.