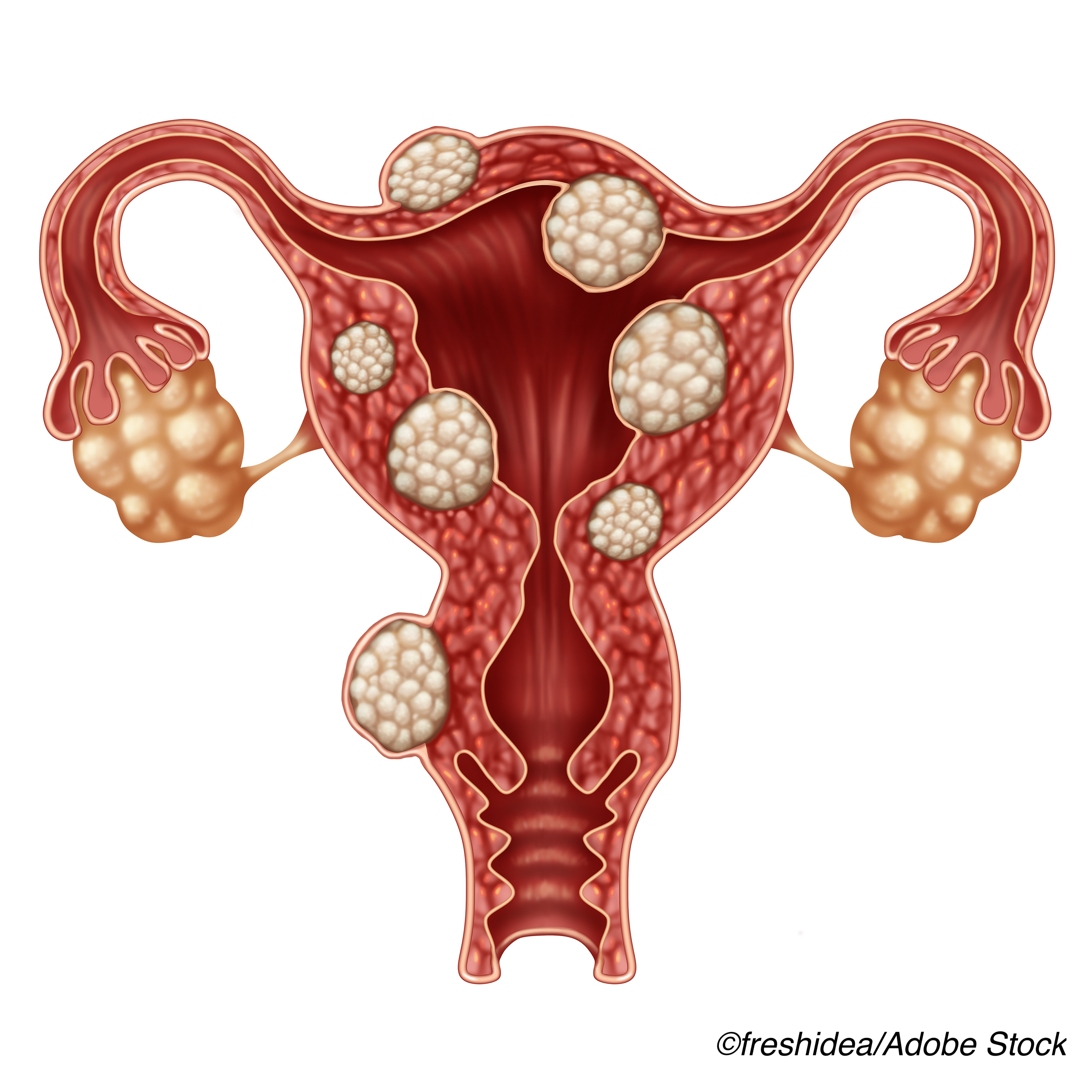 Combination therapy with the oral gonadotropin-releasing hormone-receptor (GnRH) antagonist relugolix was associated with significant reductions in heavy menstrual bleeding compared to placebo in women with uterine fibroids, with no difference in bone mineral density reported among the treatment groups, researchers reported.

In the two replicate, international, phase III trials LIBERTY 1 and LIBERTY 2, researchers evaluated the efficacy and safety of once-daily combination therapy with relugolix, estradiol, and norethindrone acetate for the treatment of fibroid-associated heavy menstrual bleeding.

Treatment with the relugolix combination was associated with an average (least square mean) reduction in blood loss of 83%, with the decrease first seen at week four and persisting throughout the remaining weeks of the 24-week trial.

Clinically meaningful improvement in hemoglobin was also seen among study participants who were anemic at baseline, and pain reduction was also reported among participants with baseline moderate-to-severe, uterine fibroid-associated pain.

Findings from the two phase III trials were published online Feb. 17, ahead of print in The New England Journal of Medicine.

Last May, the triple combination therapy elagolix, estradiol, and norethindrone acetate became the first therapy approved by the U.S. Food and Drug Administration for the treatment of heavy menstrual bleeding in women with uterine fibroids.

Commenting on the latest study findings for BreakingMED, OB/GYN Andrew Kaunitz, MD, of the University of Florida College of Medicine, Jacksonville, said the goal of adding estrogen to GnRH receptor antagonist therapy is to protect against bone loss with doses low enough to avoid fueling fibroid growth.

He said it is not yet clear if either GnRH combination therapy is safe for long-term use. The elagolix combination treatment, marketed as Oriahnn by AbbVie Inc., was approved for a maximum of 24-months use due to concerns about bone loss and other potential side effects.

“My guess is they are safe, but it will take years to know this,” he said. “The FDA probably won’t approve these agents for long-term use and insurance companies aren’t likely to reimburse for long-term use.”

He added that women approaching menopause may be perfect candidates for the GnRH-receptor antagonist treatments, because long-term treatment would not be necessary.

“My concern would be with women in their 30s and 40s,” he said. “These are fabulous agents, given how effective they are for directly reducing bleeding, anemia and other symptoms. But if they can only be used for 6 months or a year or two, that won’t get the job done for these (younger) women.”

“With an estimated $34 billion in health care costs associated with fibroids in the United States alone, there is a major need for a non-surgical long-term treatment option, particularly one that addresses women’s usual preference for uterine-sparing alternatives regardless of their reproductive plans,” wrote lead researcher Ayman Al-Hendy, MD, PhD, of the University of Chicago, and colleagues.

Relugolix was approved by the FDA in December of last year for the treatment of advanced prostate cancer.

The drug competitively binds to pituitary GnRH receptors, blocking the binding and signaling of endogenous GnRH. It is being investigated as a treatment for uterine fibroid-related symptoms due to its reversible, dose-dependent suppression of ovarian estradiol and progesterone production.

The primary efficacy endpoint was clinically meaningful reduction in blood loss (volume of menstrual blood loss <80 ml and a ≥50% reduction in volume from baseline) in the relugolix combination therapy group, compared to the placebo group. Secondary endpoints included amenorrhea, anemia, distress due to bleeding and pelvic pain and fibroid volume. Safety and bone mineral density were also assessed.

A total of 770 women were randomized to one of the three treatment groups. Approximately half of the women were Black, and the mean volume of menstrual blood loss at baseline was almost three times the upper limit of what is generally considered normal. The majority of women had moderate-to-severe uterine fibroid-associated pain, and most experienced significant distress because of their symptoms and substantially impaired quality of life.

“We found that 12 weeks of monotherapy resulted in a loss of bone mineral density and a higher incidence of vasomotor adverse events, as compared with relugolix combination therapy, and although the transition to relugolix combination therapy prevented further loss of bone mineral density, it did not reverse the changes in bone mass,” Al-Hendy et al wrote.

The study was supported by Myovant Sciences.