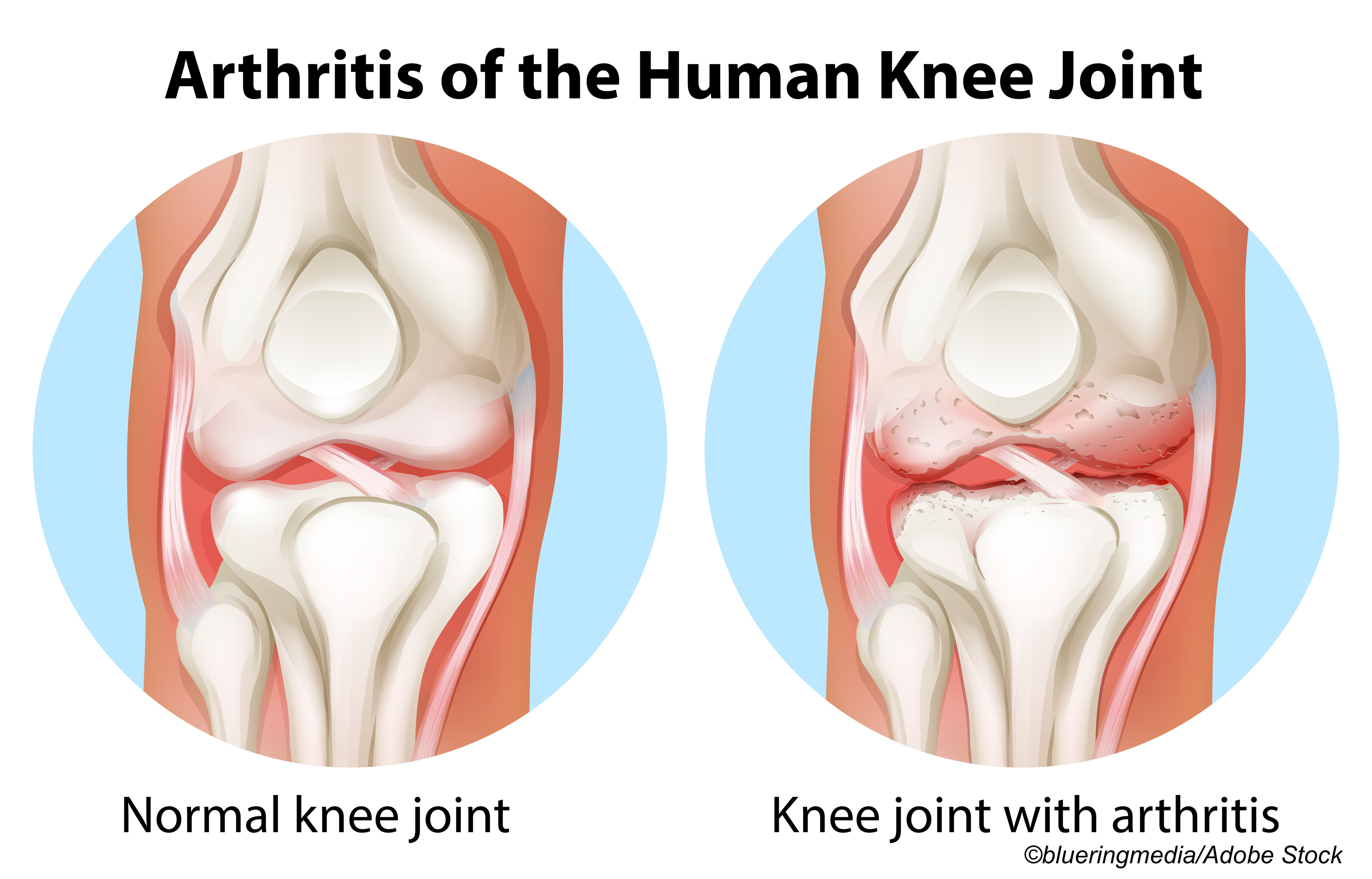 The increasingly popular, but not entirely proven, platelet-rich plasma (PRP) treatment for knee osteoarthritis (OA) did not offer dramatically different results for pain or disease progression versus placebo, researchers reported.

In a randomized controlled trial, intra-articular injection of PRP resulted in a mean change in knee pain scores of −2.1 versus −1.8 points for placebo injection for a −0.4 difference (95% CI −0.9 to 0.2 points, P=0.17) at 12 months for patients with mild-to-moderate knee OA, according to Kim L. Bennel, PhD, of the University of Melbourne in Australia, and co-authors.

The authors also found no difference in results based on BMI, presence of knee effusion, Kellgren and Lawrence grade, or knee alignment, leading them to concluded that the “trial results do not support use of this procedure (with a mean cost per injection reported as $2,032) for treating knee OA.”

The findings certainly back the skepticism about PRP expressed by professional societies. In 2021, the American Academy of Orthopedic Surgeons (AAOS) issued an update to its 2013 clinical practice guideline for knee OA and gave PRP a two-star rating (“limited evidence”) as a treatment modality. An AAOS OrthoInfo page states “[t]reatment with PRP could hold promise, however, current research studies to back up the claims in the media are lacking.”

The American College of Rheumatology recommends against PRP, while the Arthritis Foundation acknowledged that PRP can deliver symptomatic relief that may last up to six months.

“But does it have a benefit that goes beyond pain relief? We just don’t know,” stated Christopher Evans, PhD, of the Mayo Clinic Musculoskeletal Gene Therapy Research Lab in Rochester, Minnesota, in a foundation article, which also warns that “[m]ost insurers don’t cover PRP; out-of-pocket costs can range from $500 to $2,000,” and “[s]tudies suggest the preparation method, the type of centrifuge used and even the delivery method can significantly affect the results.”

In a 2021 study, researchers in India concurred that “there is a lack of consensus regarding the preparation of standardized dosing with an appropriate absolute number of platelets and concentration” for PRP. They demonstrated that an absolute count of 10 billion platelets was “crucial in a PRP formulation to have long sustained chondroprotective effect up to one year in moderate knee OA.”

Other researchers have expressed more enthusiasm for PRP for knee OA based on their positive outcomes. In a 2020 MRI-based study, researchers in Iran reported that “MRI changes including patellofemoral cartilage volume and synovitis were better in the PRP group.” While their study did show “the effect of treatment,” research comparing PRP results with other treatment modalities are needed, they added.

A 2021 pilot study out of the Baylor College of Medicine in Houston reported that leukocyte-rich PRP offered meaningful improvement in timed up and go, pain and quality of life scales, and balance parameters in knee OA, although there were non-significant improvements in range of motion and gait parameters.

Nicholas DiNubile, MD, of Premier Orthopedics in Havertown, Pennsylvania, and vice president of the American Academy of Anti-Aging Medicine, told the Washington Post that PRP as an emerging technology was “exciting,” but that “in terms of regenerative therapies… the marketing was ahead of the science… today, the science is beginning to catch up. There is solid research that [regenerative therapies] are effective and safe. They don’t regrow cartilage, but they reboot the knee in a way that it behaves better.”

Using the search term “PRP treatment for knee osteoarthritis” on YouTube turns up multiple videos—both by private practices and academic centers—hyping the treatment that is part of the burgeoning market for regenerative medicine, a market that is expected to expand from a $13 billion industry in 2019 to a $39 billion one by 2024, per Doctor.com.

In a 2018 review on the economics of PRP, C. Thomas Vangsness Jr., MD, of the Keck School of Medicine at USC in Los Angeles, and co-authors noted that “[w]hile PRP is not ’FDA-approved’, it can be legally offered in the clinic ’off-label’ in the USA for a myriad of musculoskeletal indications.”

The current trial took place from August 2017 to July 2019, with 12-month follow-up completed in July 2020. Mean patient age was around 62 in both trial arms and more than half were female. They had an average knee pain score of ≥4 on an 11-point numerical rating scale, and had mild-to-moderate OA visible on x-ray. Out of 288 patients in total, 93% completed the trial.

The patients had symptomatic medial knee OA and were randomized to receive three intra-articular injections at weekly intervals of either leukocyte-poor PRP (RegenKit-A-PRP) or saline placebo. The vast majority (97%) got all three injections.

Patients, assessors, and treating clinicians were blinded to therapeutic intervention. All patients underwent blood withdrawal to maintain blinding. Participants discontinued non-steroidal anti-inflammatory drugs and other analgesics for knee pain 2 weeks prior to baseline assessment through their 12-month follow up, according to the authors. All participants had a baseline knee MRI and again at 12-month follow-up.

The two primary outcomes were a 12-month change in pain symptoms, per the 11-point pain scale, and the percentage change in MRI-measured medial tibial cartilage volume over the same time period.

“The study aimed to detect a 40% reduction in medial tibial cartilage volume loss in the PRP group, compared with the placebo group, since this level of reduction could delay knee replacement,” the authors explained, and at “12 months, PRP injection was not more effective than saline placebo injection on either primary outcome.”

There were no serious adverse events during the trial, although more participants in the PRP arm reported knee joint pain, swelling and stiffness after injection.

Study limitations included heterogeneous and non-standardized PRP preparations, which impacted generalizability. Also, only patients with mild-to-moderate disease were included so the findings may not apply to more severe knee OA.

As for why their results differed from previous studies, the authors suggested that “this discrepancy may be due to differences in methodology such as PRP preparation method and injection regimen, outcome measures, and patient characteristics, as well as design issues affecting risk of bias. It is possible that the lack of blinding in prior trials influenced the reported improvement in symptoms.”

In an editorial accompanying the study, Jeffrey N. Katz, MD, MSc, of Harvard Medical School in Boston, also seized on the fact that PRP preparation and delivery has varied across studies. They “may vary with respect to duration of centrifugation, inclusion of leukocytes in the preparation, volume of PRP administered, number of injections administered, and other details,” he explained.

Katz added that the “concentrations of platelets and specific growth factors in PRP preparations also vary widely. It is possible that these differences may influence the efficacy of a specific PRP intervention.”

He called for putting the brakes on the use of PRP for knee OA, at least until “a new generation of trials using standardized approaches to PRP therapy provides evidence of efficacy.”

The study was funded by the Australian National Health and Medical Research Council (NHMRC). Regen Lab SA provided the commercial kits for free for the study.

Katz reported support from, and/or relationships with, Biosplice the National Institute of Arthritis and Musculoskeletal and Skin Diseases and the NIH.