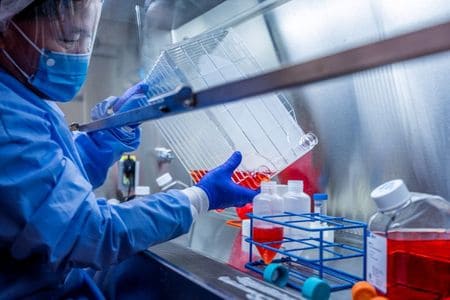 LONDON (Reuters) – Initial tests in mice of a potential COVID-19 vaccine delivered via a fingertip-sized patch have shown it can induce an immune response against the new coronavirus at levels that might prevent infection, U.S. scientists said on Thursday.

Researchers around the world are working to develop potential treatments or vaccines against the respiratory disease that has killed nearly 47,000 people and infected almost a million in just a few months.

A team at the University of Pittsburgh School of Medicine in the United States said they were able to move quickly in developing a potential COVID-19 vaccine after working on other coronaviruses that cause Severe Acute Respiratory Syndrome (SARS) and Middle East Respiratory Syndrome (MERS).

“These two viruses, which are closely related to SARS-CoV-2 (the new coronavirus causing the COVID-19 pandemic), teach us that a particular protein, called a spike protein, is important for inducing immunity against the virus,” said Andrea Gambotto, an associate professor at Pittsburgh.

“We knew exactly where to fight this new virus.”

When tested in mice, the prototype vaccine – which the researchers have called PittCoVacc – generated what they described as “a surge of antibodies” against the new coronavirus within two weeks.

The Pittsburgh researchers cautioned that because the animals have not been tracked for very long as yet, it is too early to say whether and for how long the immune response against COVID-19 lasts.

But they said that in comparable tests in mice with their MERS experimental vaccine, a sufficient level of antibodies was produced to neutralize the virus for at least a year.

So far, the antibody levels of the SARS-CoV-2 vaccinated animals seem to be following the same trend, they said in peer-reviewed study in the journal EBioMedicine.

The team said they hope to start testing the vaccine candidate on people in clinical trials in the next few months.

This array is a fingertip-sized patch of 400 tiny needles made out of sugar and the spike protein, Gambotto explained. It is designed to deliver the spike protein pieces into the skin, where the immune reaction is strongest.