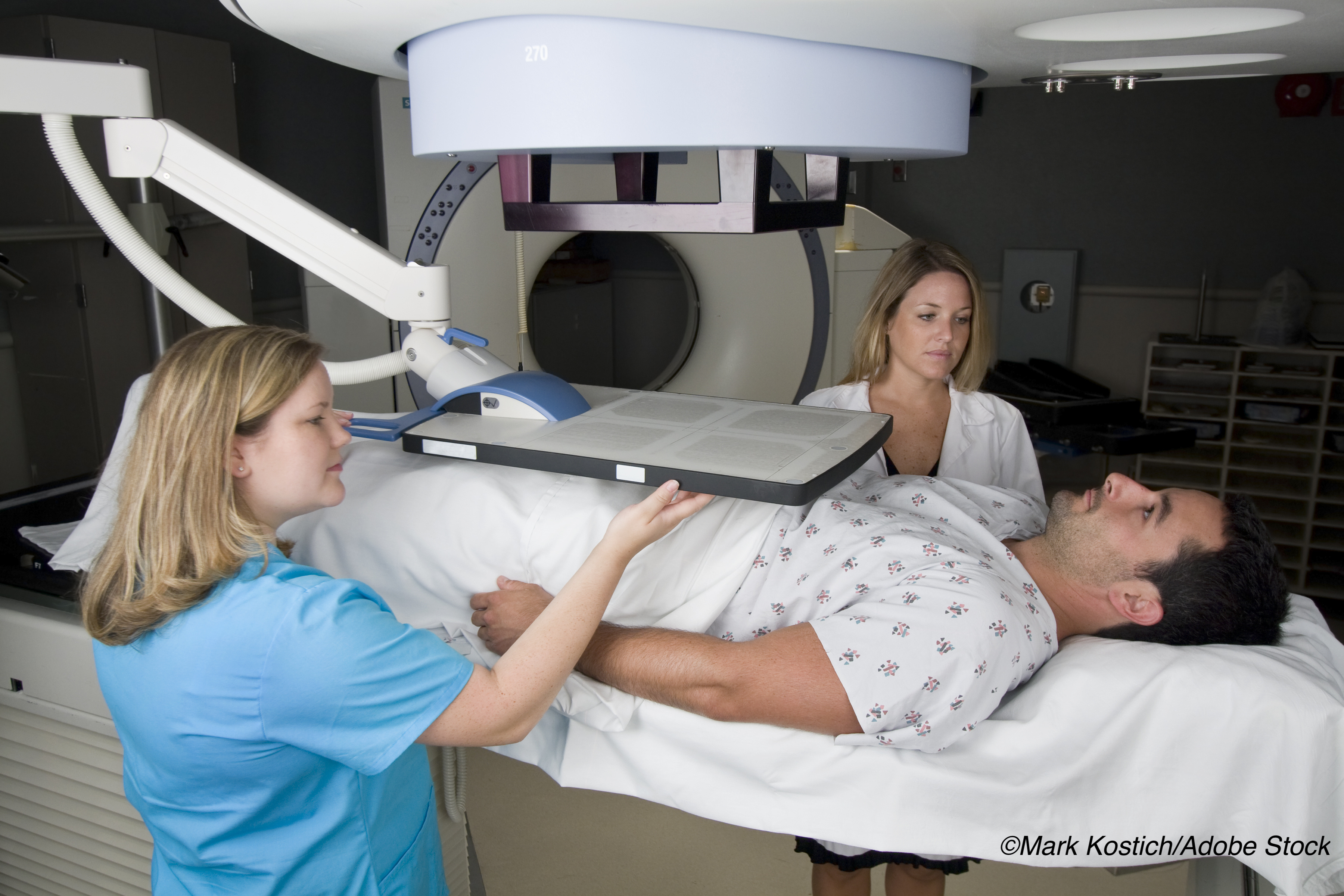 The number of bone metastases and their location predicted both overall and failure-free survival (FFS) benefit from additional prostate radiotherapy in men with newly diagnosed metastatic prostate cancer (mPCa), a secondary analysis of the phase III STAMPEDE trial found.

STAMPEDE demonstrated that radiotherapy to the prostate improved overall survival (OS) in men with a low metastatic burden, though not for the population as a whole. Now, in this secondary analysis of the STAMPEDE MI RT arm of the same study published in JAMA Oncology, Noel Clarke, MBBS, ChM, of the Christie NHS Foundation Trust, Manchester, United Kingdom, and colleagues found that OS benefit was most pronounced in men with up to three bone metastases.

In addition, there was a 40% survival benefit from the addition of prostate radiotherapy to standard-of-care (SOC) at a Hazard Ratio (HR) of 0.60 (95% CI, 0.33-1.09) among a small subgroup of men with only nonregional lymph node (NRLN) metastatic (M1a) disease, the investigators added.

In those men with three or fewer bone metastases, with or without NRLNs involvement but no visceral disease, prostate radiotherapy again improved survival by 36% at an HR of 0.64 (95% CI, 0.46-0.89), study authors noted. In contrast, there was no evidence of an OS benefit from prostate radiotherapy among patients with 4 or more bone metastases with or without NRLN involvement.

“[T]he overall take-home message is that local RT (radiotherapy) matters most in men with few metastases and good systemic control and that local RT should be applied more cautiously as the burden of disease increases,” Bridget Koontz, MD, Duke University School of Medicine, Durham, North Carolina, and Thomas Hope, MD, University of California, San Francisco, noted in an editorial accompanying the study. “This… [study] provides confirmation that focusing more aggressive therapies targeting the bulkier sites of disease can improve survival when the systemic burden of disease is low.”

A total of 1939 men with newly diagnosed mPCa randomized to the STAMPEDE MI RT arm were available for data analysis.

Standard-of-care consisted of lifelong androgen deprivation therapy (ADT) with up-front docetaxel given to some patients who were randomized later on in the study.

“Patients allocated to RT received either 55 Gy in 20 daily fractions over four weeks or 36 Gy in six weekly fractions over six weeks,” Clarke and colleagues noted. In the subpopulation of patients with one bone metastasis, the addition of prostate radiotherapy to SOC was associated with an absolute improvement in OS of 8.5% at three years.

The addition of prostate radiotherapy was also associated with an absolute 21.5% improvement in FFS at three years in men with one bone metastasis while estimated three-year FFS rates were 10.1%, 14.2% and 8.8% in men with two, three, and four bone metastases, respectively.

Investigators then went on to define metastatic burden as “low” in patients with only NRLN involvement or three or fewer bone metastases with or without NRLN but no visceral or other forms of metastases. All others fell into the high metastatic disease burden category.

“We show that metastatic burden criteria are not just prognostic; they are predictive of survival benefit when primary-site prostate RT is used,” Clarke and colleagues wrote.

As Koontz and Hope noted, the current analysis of the STAMPEDE MI RT data are important because it provides additional information about who should be offered prostate radiotherapy and which patients are less likely to benefit from it, but cautioned: “[w]e do not know if it is the number of metastases or the volume of metastatic disease that matters or if both are equally important.”

Knowing these differences is critical, the editorialists suggested, as clinicians resort to the use of gallium-labeled ligands of the prostate-specific membrane antigen (68Ga-PSMA-11 position emission tomography (PET) more frequently to stage prostate cancer and forego simple bone scans.

“Determining how PSMA PET should be used will be essential as we move to an era of making treatment management decisions based on PET imaging results,” Koontz and Hope affirmed.

“Instead of counting metastases, decision-making may instead migrate to volume-based risk assessment of disease to determine who is likely to benefit from prostate RT,” as they suggested.

The study was funded by Astellas, Clovis Oncology, Janssen, Novartis, Pfizer and Sanofi Aventis as well as other non-pharmaceutical sources.