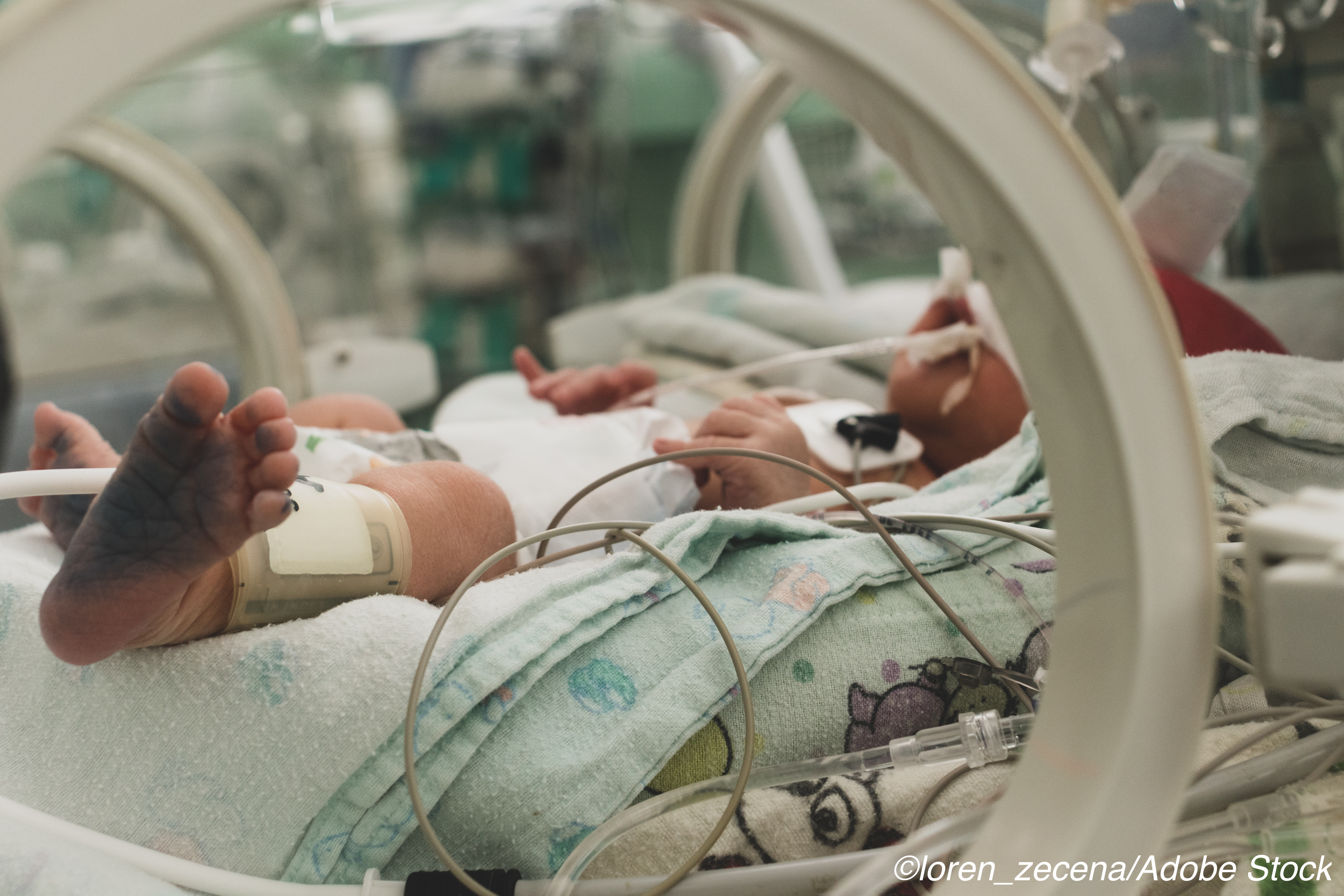 Compared with babies who did not have NEC across the ﬁrst 10 weeks of life, 46 infants (26 median weeks gestational age) who developed NEC had a significantly lower cerebral tissue oxygenation index (cTOI), at 56.9% versus 63.9%, according to Narendra Aladangady, MBBS, PhD, of the Homerton University Hospital National Health Service Foundation Trust in London, and co-authors.

Infants with NEC also had significantly higher cerebral fractional tissue oxygen extraction at 0.38 versus 0.30 for those without NEC throughout their neonatal treatment course, they stated in Pediatrics.

“This is a novel ﬁnding and could explain their worse neurodevelopmental outcome,” the authors stated. “Continuous cerebral NIRS [near-infrared spectroscopy] monitoring may beneﬁt the clinical outcomes of preterm infants because NIRS has the potential to alert clinicians to when cerebral hypoxia occurs, allowing time for prompt interventions to ameliorate their cerebral hypoxia and, potentially, reduce their long-term neurodevelopmental impairment.”

NEC occurs when the intestinal wall is invaded by bacteria, which causes local infection and inflammation that can lead to bowel wall destruction. The disease usually affects preterm infants and may be due to a lack of blood and oxygen delivered to their intestinal tissues.

The small number of infants who developed NEC (seven in the study) was a limitation, according to Rosemary S. C. Horne, PhD, Dsc, of Monash Children’s Hospital in Melbourne, Australia. Still, “the study provides preliminary evidence that lowered cerebral oxygenation may underpin the worse neurodevelopmental outcomes that have been reported in preterm infants with NEC,” she wrote in a commentary accompanying the study.

Horne noted that the median study duration of 7.3 weeks indicated that persistent low cerebral oxygenation levels likely would result in significant neurologic impairment, although there was no follow-up to confirm this.

She drew attention to two current phase III trials – SafeBoosC and COSGOD – which will look at the pros and cons of NRIS monitoring-based treatment versus usual treatment for extremely preterm infants and at survival outcomes in preterm neonates with targeted cerebral tissue oxygen saturation during the first 15 minutes post-birth, respectively.

The authors conducted a longitudinal study of 46 preterm infants born at <30 weeks gestational age, and recorded cerebral oxygenation using NIRS. The latter is a non-invasive method of brain imaging that measures light absorbance to calculate oxy-hemoglobin and deoxy-hemoglobin as a way to provide an indirect measure of brain activity, particularly in the frontal cortex.

The 46 infants had a median birth weight of 884 g; 52% were girls. The median time an infant stayed in the study was 7.3 weeks. NEC was defined as Bell stage ≥2 which included such symptoms as bloody stools, lethargy, slow heart rate, and unstable temperature.

The researchers performed cerebral oximetry measurements on the entire cohort using a NIRS monitor weekly for 60 minutes, which allowed for the measurement of cerebral tissue oxygenation index from the ﬁrst week of life to 36 weeks post-conceptional age.

They noted that NIRS measurements from one infant with NEC and four infants without NEC who developed hemorrhagic parenchymal infarcts were excluded from analysis.

“Infants who developed NEC had signiﬁcantly lower cerebral tissue oxygenation index than those who did not [P=0.011], even when adjusted for confounders, including gestational age, birth weight, patent ductus arteriosus, enteral feeds, sex, ethnicity, and hemoglobin,” Aladangady and co-authors reported.

Other study limitations included the fact that only weekly cerebral NIRS measurements were conducted, and that the partial pressure of carbon dioxide was not recorded which could have impacted cerebral perfusion. Also, there was no follow-up to determine if the infants with NEC and lower CTO1 had worse neurodevelopmental outcomes.

Horne also backed the role NIRS could play in the neonatal ICU, stating that “continuous cerebral oxygenation monitoring with NIRS has the potential to identify infants at risk for cerebral hypoxia so that interventions can be promptly implemented to minimize the risk of long-term neurologic deficits in these vulnerable infants.”

The study was funded by the Barts Charity, with which Howarth disclosed employment.

Horne disclosed no conflicts of interest.

Moving From Knowledge to Action: Improving Safety and Quality of Care for Patients With Limited English Proficiency.

The Associations between Anemia, Stunting, Low Birthweight, and Cognitive Ability in Indonesian Children: An Analysis from the Indonesian Family Life Survey