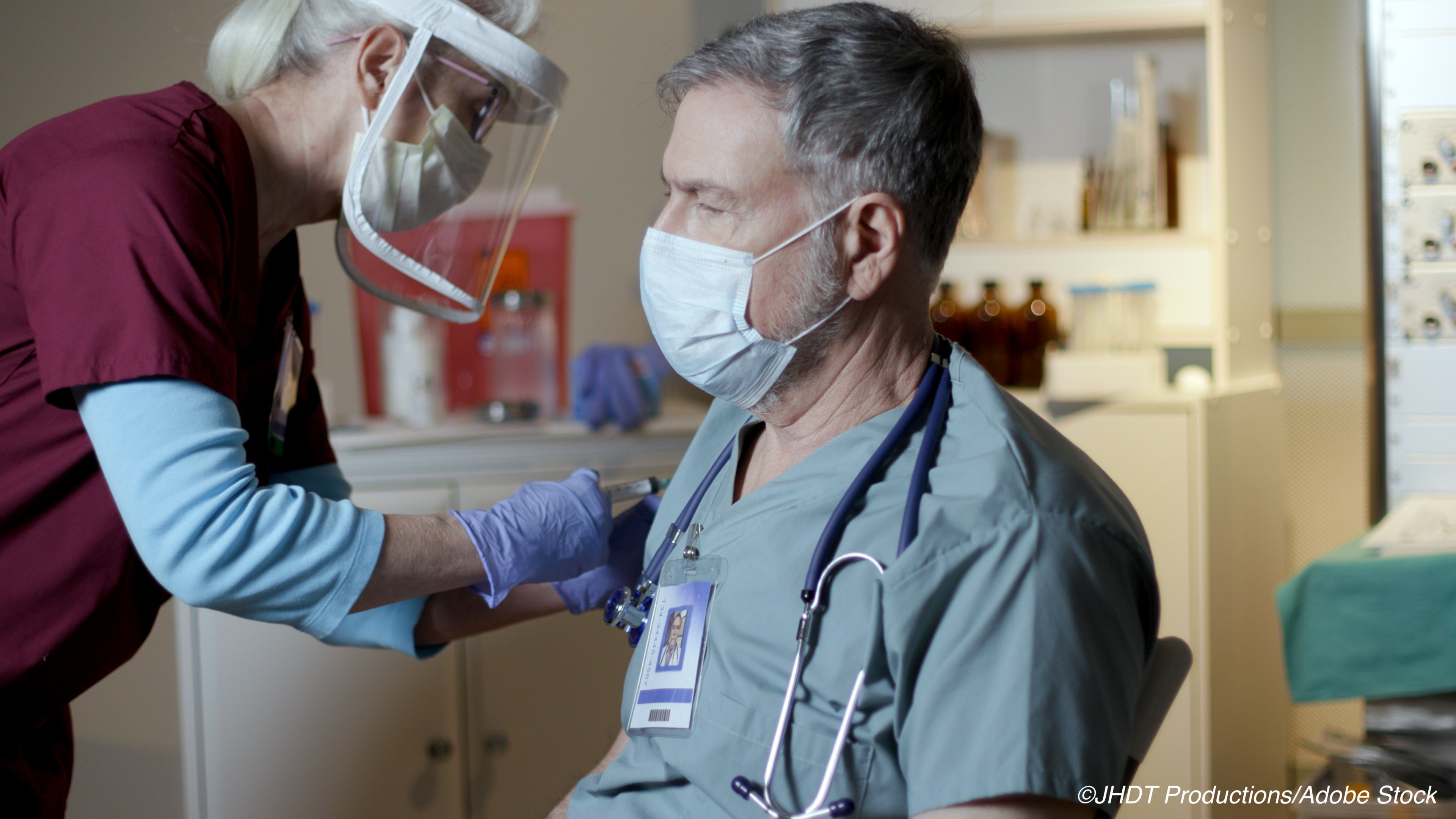 Reports from hospitals in California, Texas, and Jerusalem offer reassuring evidence that infections are extremely rare among health care workers after they have been fully vaccinated against Covid-19, even during community outbreaks of SARS-CoV-2.

Correspondences from the three medical centers published online this week in New England Journal of Medicine confirm the real-world efficacy of the messenger RNA vaccines for protecting health care workers caring for patients hospitalized with Covid-19.

A report from Israel’s Hadassah Hebrew University Medical Center, in Jerusalem, showed a marked decline in SARS-CoV-2 infections among the 6,680 employed health care workers after a vaccination program was initiated at the two-campus medical center.

Routine screening revealed that around 10% of hospital staffers (689 of 6,680 people) tested positive for SARS-CoV-2 from the beginning of the Covid-19 outbreak through Jan. 31, 2021, with most infections traced to community, and not workplace, exposures.

Vaccination with 2 doses of the BNT162b2 vaccine (Pfizer/BioNTech), given 21 days apart, began on Dec. 20, 2020 within the medical center, and within 8 weeks, 84.7% of employees who had not been previously infected by December 20 were vaccinated.

Researcher Shmuel Benenson, MD, and colleagues reported that the weekly incidence of Covid-19 after administration of the first dose “declined notably” within two weeks and continued to decrease dramatically through the fourth week.

Vaccination of health care workers with the BNT162b2 vaccine resulted in a major reduction of new cases of Covid-19 among those who received two doses of the vaccine, even when a surge of the B.1.1.7 variant was noted in up to 80% of cases.

“These findings suggest that widespread and effective vaccination among health care workers provides a safe environment, even in the presence of a high rate of SARS-CoV-2 infection in the community,” Benenson and colleagues concluded.

Researcher Michael Pfeffer, MD, of UCLA’s David Geffen School of Medicine, and colleagues, wrote that “the rarity of positive test results 14 days after administration of the second dose of vaccine is encouraging and suggests that the efficacy of these vaccines is maintained outside the trial setting.”

They added, however, that the slightly higher absolute risk for testing positive following full vaccination than was reported in clinical trials underscores “the critical importance of continued public health mitigation measures (masking, physical distancing, daily symptom screening, and regular testing), even in environments with a high incidence of vaccination, until herd immunity is reached at large.”

A report on the health care worker vaccination program at the University of Texas Southwestern Medical Center (UTSW), Dallas, both highlighted the efficacy of vaccination and raised concerns about worker vaccine hesitancy.

The initiation of a health care worker vaccination program in mid-December 2020, coincided with escalating community SARS-CoV-2 infections in the area, which led to a large surge of Covid-19 cases and strains on health system capacity to deliver care to patients hospitalized due to the virus, wrote William Daniel, MD, and colleagues of UTSW.

In the initial 31 days of the vaccination program, 59% of the 23,234 UTSW employees received a first dose of either of the mRNA vaccines. Thirty percent of those receiving an initial dose received a second dose during this period.

The researchers noted that from early January on, the actual number of positive tests among UTSW staffers was consistently lower than the number projected based on increasing SARS-CoV-2 positivity among patients presenting to the medical center emergency department.

“The effect of vaccination on the preservation of our workforce has been dramatic,” Daniel and colleagues wrote, adding that a greater than 90% decrease in the number of staffers who were either in isolation or quarantine was seen following full vaccination.

“Real-world experience with SARS-CoV-2 vaccination at UTSW has shown a marked reduction in the incidence of infections among employees. This decrease has preserved the workforce when it was needed most,” they wrote.

But they noted that the failure to fully vaccinate a significant percentage of workers within the system makes it clear “that vaccine hesitancy presents an important challenge, even when access is not an obstacle.”

Approximately 30% of UTSW employees had not been vaccinated in phase 1a by Feb. 4, and 12% remained unvaccinated by March 5.

“Addressing the factors underlying this reluctance through insight gained from experience will be essential if the full potential benefit of vaccination in creating a path to normalcy is to be achieved,” the researchers concluded.

Traditional Chinese Medicine (TCM) in the treatment of viral infections: Efficacies and mechanisms.

Use of Pneumococcal and influenza vaccine in patients with COPD, asthma bronchiale and interstitial lung diseases in south east Germany.