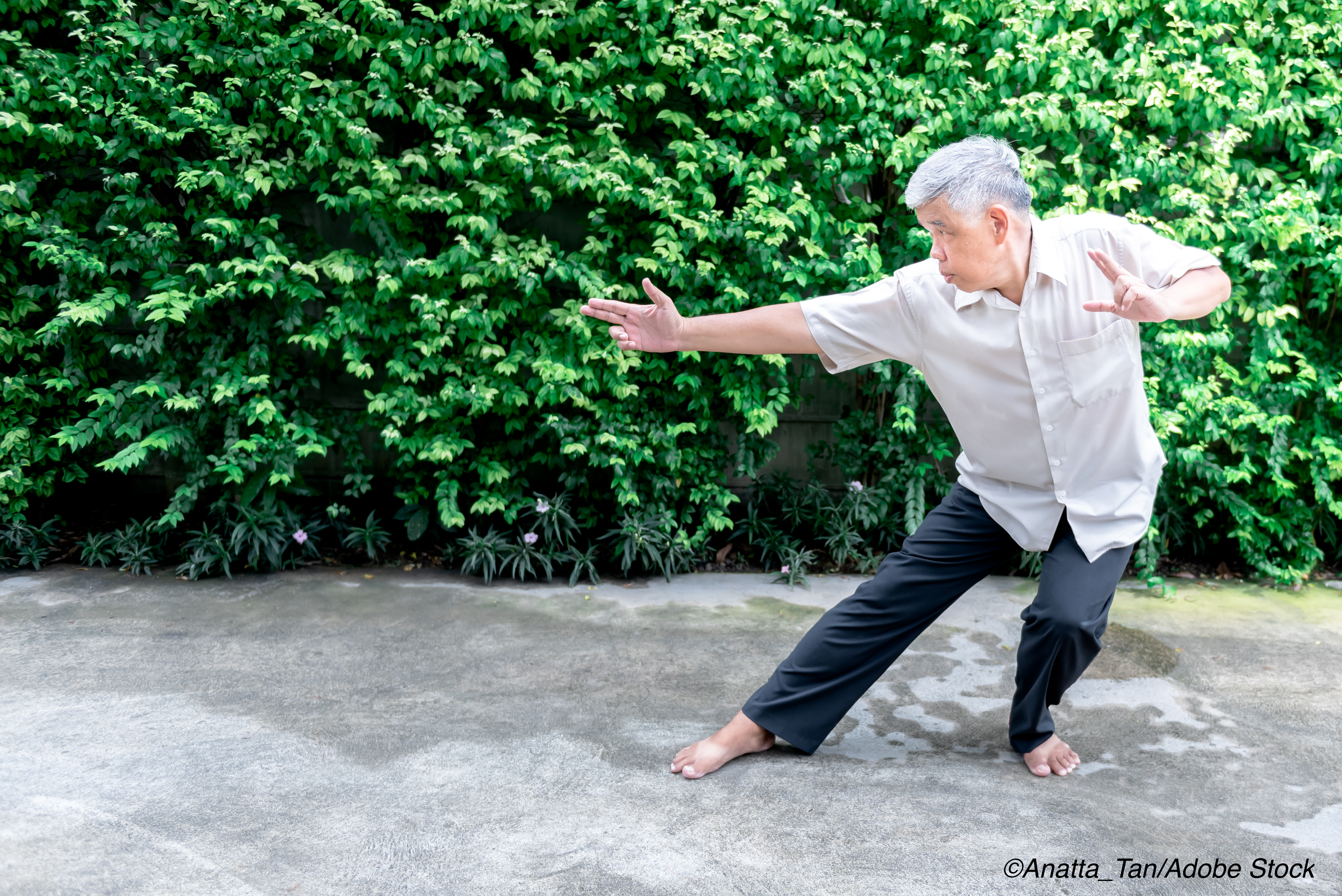 Tai chi was comparable to conventional exercise in a randomized, controlled trial

Tai chi may be as effective as conventional exercise for combating metabolic syndrome—particularly one of its hallmark features, increased waist circumference (WC), a randomized, controlled study suggests.

“Our study showed that a 12-week tai chi program or a conventional exercise program in adults age 50 years or older with central obesity could mitigate increases in WC over time, suggesting that both interventions can prevent progression of central obesity,” Parco M. Siu, PhD, from the School of Public Health, The University of Hong Kong, China, and colleagues wrote in the Annals of Internal Medicine. “Our data suggest that tai chi, a gentle mind-body exercise, can be an effective alternative to conventional exercise in the management of central obesity.”

Tai chi, as the study authors pointed out, is often called “meditation in motion” because of its gentle, flowing movements. It, along with its counterpart qi gong, has reported health benefits and may help “improve balance and stability in older people and in those with Parkinson’s disease, reduce back pain and pain from knee osteoarthritis, and improve quality of life in people with heart disease, cancer, and other chronic illnesses. Tai chi and qi gong may ease fibromyalgia pain and promote general quality of life… Tai chi also may improve reasoning ability in older people,” according to the NIH’s National Center for Complementary and Integrative Health.

But Siu and colleagues wanted to find out if tai chi could reduce the belly fat that is a hallmark of metabolic syndrome, that “cluster of cardiometabolic risk factors, including central obesity, dyslipidemia, hyperglycemia, low high-density lipoprotein cholesterol (HDL-C) level, and high blood pressure, that all increase risk for type 2 diabetes and cardiovascular disease,” and would it work as well as conventional exercise for individuals age 50 and older?

In their randomized, controlled, assessor-blinded trial conducted at a single research site in Hong Kong from Feb. 27, 2016 to Feb. 28, 2019, 569 individuals were screened for central obesity. Of these, 543 were randomly assigned (1:1:1) to one of three study arms—a control group that did not have an exercise intervention (n=181); a conventional exercise group that did aerobic exercise and strength training (EX group, n=181); and the tai chi group (n=181, TC group). The study interventions were done over 12 weeks.

The study authors pointed out that the definition of overweight and obesity using the WHO parameters differs from the threshold of 30 kg/m2 used to define obesity in the U.S. and many Western countries.

“Overall, we showed that tai chi had health benefits similar to those of conventional exercise and thus provides an alternative and more amenable exercise modality for middle-aged and older adults to manage central obesity,” Siu and colleagues wrote. “There are important health care implications for older people who might be averse to conventional exercise because of physical limitations or comorbidities.”

Nonetheless, the study is not without some limitations, Siu and colleagues noted—30% of participants were lost to follow-up; a dietary intervention was not included in the study; while no adverse events related to the interventions were reported, given the dropout rates, they could not be ruled out; there were no direct measures of subcutaneous and visceral adiposity; and cultural differences may limit the use of tai chi in other populations.

The primary funding for the study was from the Health and Medical Research Fund of the Food and Health Bureau, Hong Kong