The Spot Sign and Tranexamic Acid in ICH Growth 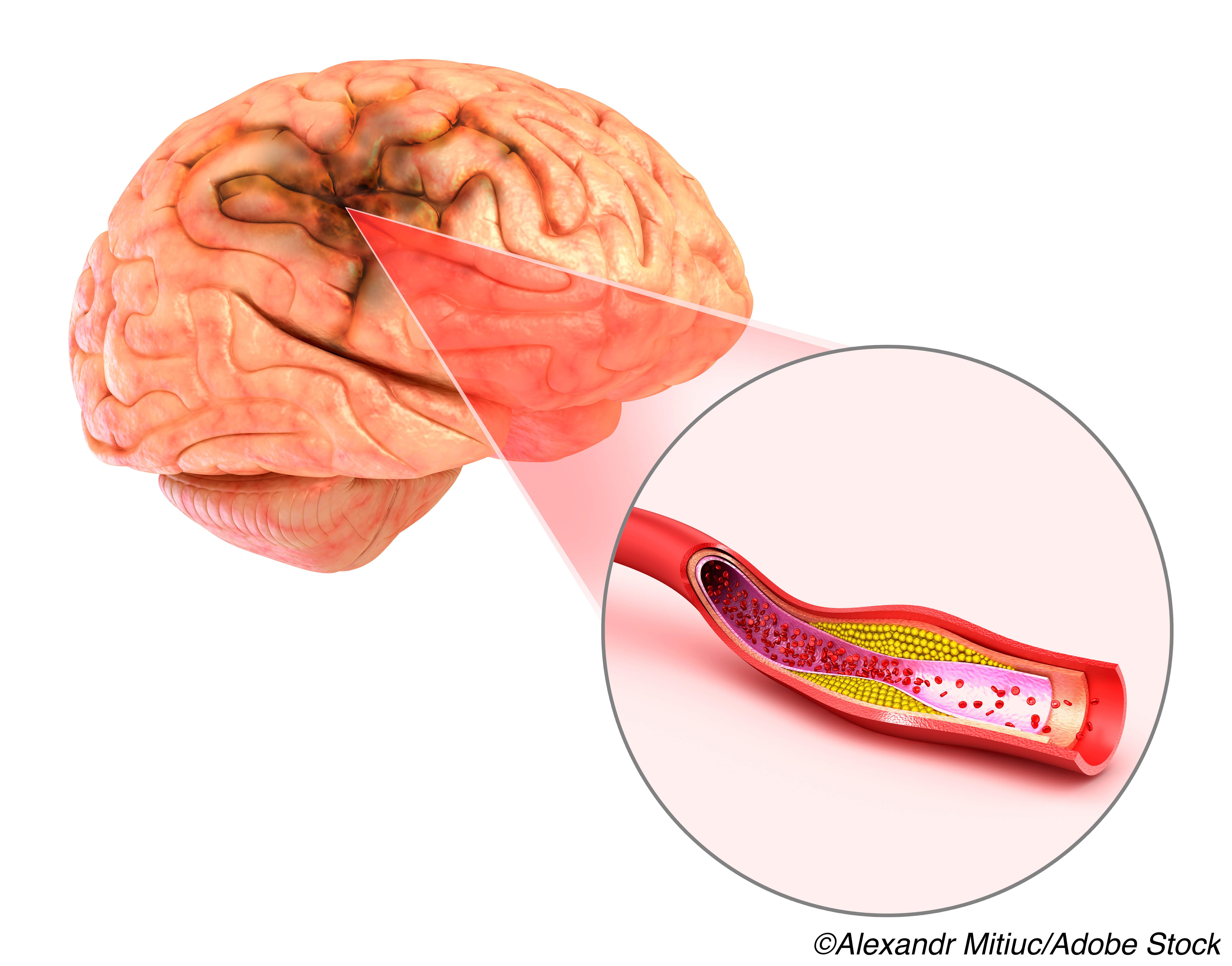 Tranexamic acid administered in non-traumatic intracerebral hemorrhage within 4.5 hours of symptom onset did not differ from placebo in controlling hemorrhage growth, data from the phase II STOP-AUST trial suggested.

“Our study does not provide evidence that tranexamic acid prevents intracerebral hemorrhage growth, although the treatment was safe with no increase in thromboembolic complications,” wrote Atte Meretoja, MD, of Helsinki University in Finland, and coauthors in Lancet Neurology.

“Larger trials of tranexamic acid, with simpler recruitment methods and an earlier treatment window, are justified,” they added.

In STOP-AUST, adults with a Glasgow Coma Scale score of >7, intracerebral hemorrhage volume <70 mL, no secondary cause of intracerebral hemorrhage, and contrast extravasation on CT angiography (known as the “spot sign“) were randomized to treatment with tranexamic acid (n=50), an inexpensive and widely available anti-fibrinolytic agent, or placebo (n=50).

Hemorrhage growth, the primary outcome, was defined as at least 33% relative or 6 mL absolute increase from baseline volume at 24 hours.

Spontaneous intracerebral hemorrhage is the least treatable and most deadly form of stroke, accounting for about 5% of all deaths and causing major disability in about 18 million survivors each year, observed David Werring, PhD, of UCL Queen Square Institute of Neurology in England, in an accompanying editorial.

“By contrast with the advances in treating ischemic stroke, there are not effective treatments for acute intracerebral hemorrhage, making it a major and urgent unmet clinical need,” he wrote.

“Detection of a spot sign has been suggested as a criterion to select participants for trials of interventions targeting hematoma expansion, with the aim of reducing the sample size needed to detect a treatment effect,” he added.

Volume is the most important intracerebral hemorrhage factor affecting outcome. A treatment opportunity exists early after hemorrhage onset, when expansion is common, with a 1 standard deviation increase in hematoma volume over 24 hours associated with a poor outcome in a 2012 study.

Earlier work with hemostatic agents includes a 2008 study of recombinant activated coagulation factor VII (rFVIIa). The agent reduced hemorrhage growth at 24 hours, but with no difference in the outcome of severe disability or death at 90 days, and more frequent arterial thromboembolic events in the higher dose rFVIIa group.

Prior study of tranexamic acid included the 2018 TICH-2 phase III study. The trial randomized 2,325 patients to tranexamic acid (1 g bolus over 10 minutes, then 1 g over 8 hours) and found no difference versus placebo in 90-day functional status.

Meretoja and colleagues recruited 100 adult patients with non-traumatic intracerebral hemorrhage and spot sign on CT angiography between March 2013 and August 2019 from 13 stroke centers in Australia, Finland, and Taiwan. Median age was 71. In the placebo group, 46% of participants were women, compared with 30% in the treatment group. The median pre-stroke modified Rankin scale (mRS) score was 0 in both groups.

All participants received either intravenous tranexamic acid 1 g in 100 mL 0.9% NaCl over 10 minutes followed by 1 g in 500 mL 0.9% NaCl infusion over 8 hours, or placebo with the same administration schedule, started within 4.5 hours of symptom onset.

Median age was 71 years, median intracerebral hemorrhage volume was 14.6 mL and median NIH Stroke Scale score was 13. Intraventricular extension was seen in 18% for placebo and 26% of the active treatment group.

“The treatment was safe with no increase in thromboembolic complications,” the researchers wrote. “Because hemorrhage growth is a major cause of morbidity and mortality in acute intracerebral hemorrhage, new, safe, and effective treatments to stem ongoing hemorrhage are urgently required.”

“Further trials of tranexamic acid in patients with intracerebral hemorrhage in the early time window are already ongoing,” they added.

“In STOP-AUST, the trialists took 6 years to recruit 100 participants in 13 centers; this challenge might have been in part due to the requirement to obtain CT angiography and assess for a spot sign, which is not part of the routine care for these patients,” Werring pointed out. “The added value of this additional imaging is uncertain: even in those with a spot sign, only about half had hematoma growth, in line with findings from observational studies.”

Limitations of the study include its small sample size. In addition, the median delay from baseline scan to treatment (41 minutes) means substantial hemorrhage growth may have happened before treatment.

“In the setting of no evident safety concerns, deferred consent should be considered for speeding up start of therapy in future tranexamic acid trials,” the researchers said. “Simpler trials using a very early time window might be more applicable in clinical practice.”

The study was funded by the Australian National Health and Medical Research Council and the Royal Melbourne Hospital Foundation.

Meretoja reports honoraria paid for advisory board, speaker fees, and travel from Stryker and Boehringer Ingelheim.

Werring was a member of the trial steering committee for the TICH-2 trial.