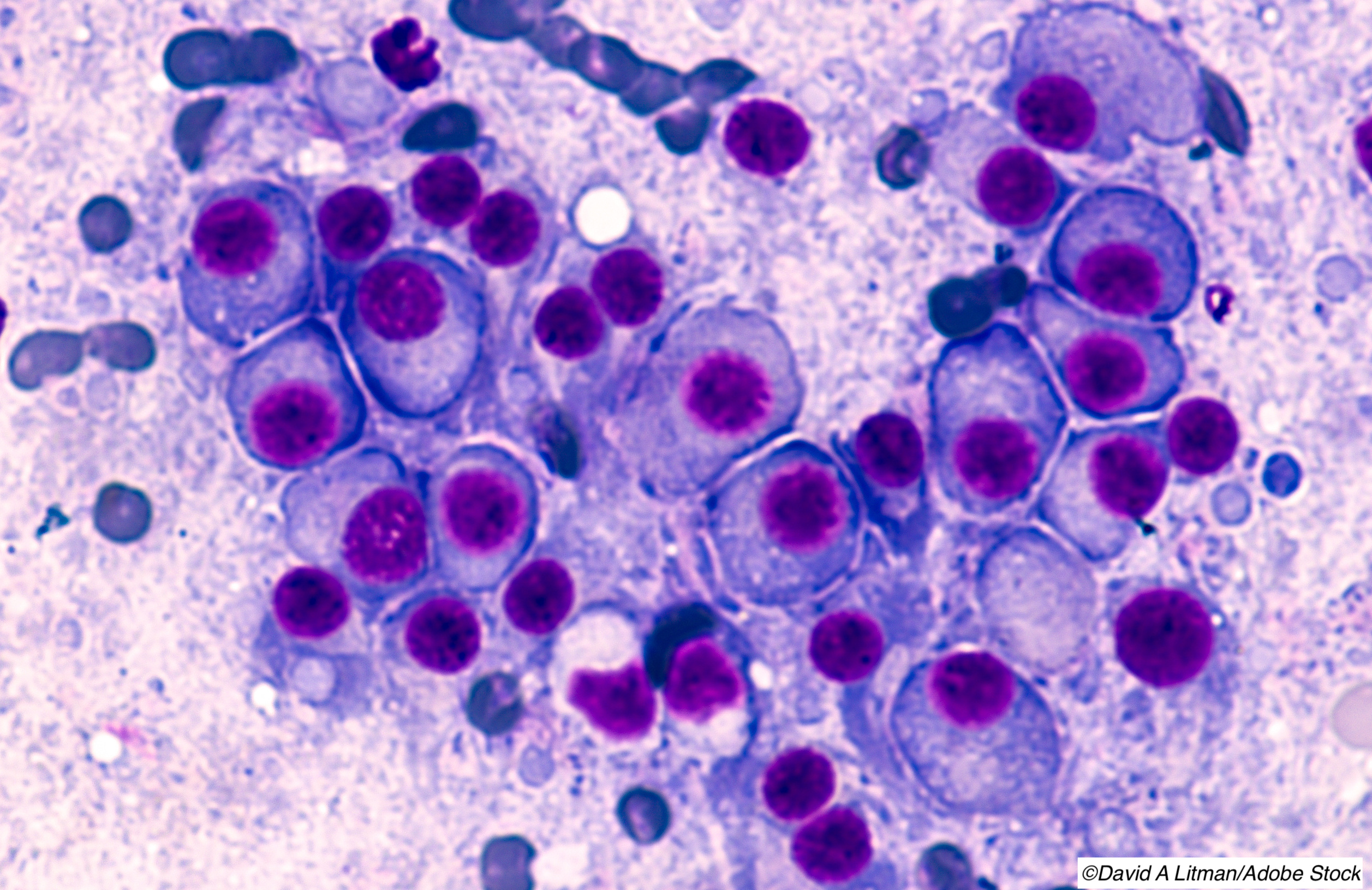 Triple-agent treatment led to skyrocketing overall survival (OS) and progression-free survival (PFS) in patients with newly diagnosed multiple myeloma (MM) who were ineligible for stem-cell transplantation, according to updated results from the MAIA trial.

In the ongoing phase III trial, median OS was not reached in patients who received a regimen of daratumumab/lenalidomide/dexamethasone (95% CI not reached) and neither was median PFS (95% CI 54.8 to not reached) at 56.2 months, reported Thierry Facon, MD, of the University of Lille in France, and co-authors.

And, since “[t]here were no new safety concerns,” the results “support the frontline use of daratumumab plus lenalidomide and dexamethasone” for patients with MM who are ineligible for transplantation, the authors wrote. In addition, given the estimated 60-month PFS of 52.5% (95% CI 46.7 to 58.0) in the daratumumab group, the median PFS “is anticipated to be more than 5 years, which, to our knowledge, would be unprecedented” in this patient population, they emphasized.

“I think it’s important to highlight this, as it’s clearly a new benchmark for PFS in the elderly [patients with transplant-ineligible new MM],” Facon told eCancer at the 2021 European Hematological Association meeting. “The best regimens we’ve had so far have provided a median PFS of around 3 years… with either the combination bortezomib [Velcade], lenalidomide, and dexamethasone, the so-called VRd, or the combination of daratumumab, bortezomib, melphalan, and prednisone, the so-called dara-VMP. This [MAIA] regimen has moved the PFS from to 3 years to 5 years.”

The updated survival outcomes strengthen the existing star-power of MAIA. At the 2020 American Society of Hematology (ASH) virtual meeting, Jesus F. San-Miguel, MD, PhD, of the Universidad de Navarra in Spain, and co-authors evaluated findings from MAIA and the ALCYONE trials and concluded that “[daratumumab-based] combination regimens induce higher rates of [minimal residual disease] MRD-negativity and sustained MRD negativity, which are associated with deep responses and improved PFS.”

MAIA co-investigator Aurore Perrot, MD, of the University of Toulouse, called the PFS results “incredible” in a VJHemOnc interview at the 2020 ASH meeting. San-Miguel noted to VJHemOnc in 2021 that, based on MAIA and ALCYONE, “the impact of achieving MRD negativity is important… if you combine both studies…[they] reinforce the predictive value of achieving MRD negativity and, what is more important, to sustain MRD.”

As for ALCYONE, that trial found dara-VMP halved the risk of disease progression or death versus VMP alone in patients with newly diagnosed MM that is not suitable for high-dose chemotherapy and transplantation. The 3-year OS with dara-VMP came in at 78.0% versus 67.9% with VMP alone, making the former “the first daratumumab-based combination that has shown an OS benefit,” ALCYONE investigator María-Victoria Mateos, MD, PhD, of the University Hospital of Salamanca in Spain, told ASH Clinical News.

So MAIA and ALCYONE join a virtual constellation of studies in which MRD negativity was linked with a brighter future in MM. The 2016 POLLUX and CASTOR trials first reported better MRD in the relapsed setting. Earlier trials with lenalidomide-based or bortezomib regimens were TOURMALINE-MM1, ELOQUENT-2, ASPIRE, and PANORAMA 2.

Both POLLUX and CASTOR in the New England Journal of Medicine (NEJM) demonstrated that “[d]aratumumab represents a landmark advance in the treatment of myeloma. It is likely to be incorporated into the treatment of all stages of the disease over the next several years,” according to S. Vincent Rajkumar, MD, and Robert A. Kyle, MD, both of the Mayo Clinic in Rochester, Minnesota, in an accompanying NEJM editorial.

They advised that daratumumab/lenalidomide/dexamethasone should be the go-to treatment for “first relapse in patients whose disease is not refractory to lenalidomide… the magnitude of benefit is impressive, and the regimen is relatively easy to administer, especially after the first 6 months of therapy.”

For patients with lenalidomide-refractory disease, the daratumumab/bortezomib/dexamethasone regimen from CASTOR is “a major option… although the older regimen of bortezomib-cyclophosphamide-dexamethasone is a reasonable alternative,” according to Rajkumar and Kyle.

However, they cautioned that one “challenge will be to prevent unnecessary use, since it will be hard to isolate the effect of daratumumab when it is combined with multiple other active agents. It will be important for future randomized trials to compare the various triplet regimens so that we can make more informed decisions.”

Daratumumab is a human immunoglobulin-κ monoclonal antibody that targets CD38 with a direct on-tumor and immunomodulatory mechanism of action, Facon’s group explained. The agent is FDA approved, as monotherapy and in combination with standard-of-care regimens, in newly diagnosed MM and relapsed or refractory MM.

MAIA is taking place in 176 hospitals in 14 countries in North America, Europe, the Middle East, and the Asia-Pacific region. Study protocol, including dosing, and results at a median of 28 months follow-up were revealed in a 2019 prespecified interim analysis in NEJM. In an accompanying editorial, Jacob Laubach, MD, of the Dana Farber Cancer Institute of Boston, pointed out that “the median age of the participants in the study was 73 years,” and MAIA results are one of the “expanding number of effective induction regimens [that] will improve clinical outcomes among older patients with multiple myeloma.”

Patients (n=737) were enrolled in MAIA from March 2015 to January 2017, and among patients who were randomly assigned, 99% in the daratumumab group and 99% in the control group received at least one dose of study treatment, according to Facon and co-authors.

They reported that the median duration of response was not reached in the daratumumab group versus 43.9 months (95% CI 37.7 to 52.9) in the control group.

The authors also found that the most common (>15%) grade ≥3 treatment-emergent adverse events (TRAEs) were neutropenia (54% in the daratumumab group versus 37% in the control group), followed by pneumonia (19% versus 11%, respectively). Serious AEs occurred in 77% and 70%, respectively. Treatment-related deaths occurred in 4% and 3%, respectively.

Facon’s group noted that at a median follow-up of 47.9 months and a clinical cutoff date of June 8, 2020, the MRD-negativity rate was “significantly higher in the daratumumab group than in the control group (31% versus 10%, odds ratio 3.91, 95% CI 2.62 to 5.84, P<0.0001). However, MRD “data were not updated based on the clinical cutoff date for the overall survival and progression-free survival analyses presented in this Article; however, a formal [MRD] analysis is planned for a future data cut,” they cautioned.

Despite that high rate of crossover, “a significant survival advantage was observed in the daratumumab group compared with the control group, highlighting the importance of using daratumumab plus lenalidomide and dexamethasone as first-line treatment in this setting,” according to Facon and co-authors.

MAIA is funded by Janssen Research & Development. Some co-authors are company employees.