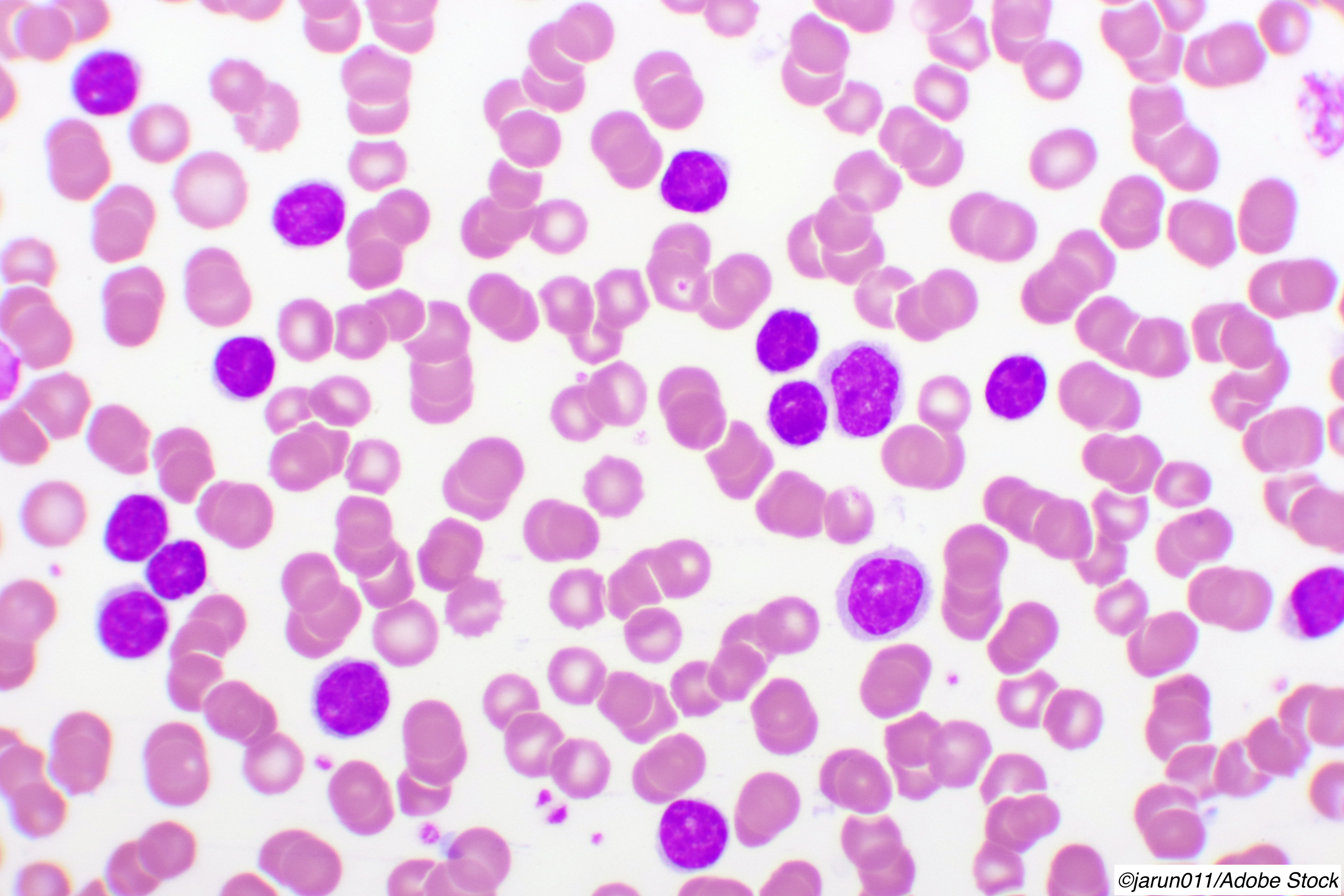 A triple-therapy drug combo for chronic lymphocytic leukemia was the subject of this article, which BreakingMED published Nov. 17, 2021, and is being re-published now as part of our year-end review. Click here to view the original article and obtain CME/CE credit.

A triple-agent front-line treatment was active and well tolerated in patients with chronic lymphocytic leukemia (CLL), although the phase II study did not meet its primary endpoint, researchers reported.

In a single-arm, open-label trial of acalabrutinib, venetoclax, and obinutuzumab therapy, 38% (n=14/37) of participants with CLL had complete remission (CR) with undetectable minimal residual disease (MRD) in the bone marrow at cycle 16/day 1 (28-day cycles), according to Matthew S. Davids, MD, MMSc, of the Dana-Farber Cancer Institute in Boston, and co-authors.

They acknowledged that the primary endpoint of CR based on International Workshop on Chronic Lymphocytic Leukemia (iwCLL) 2018 criteria, along with undetectable MRD in the bone marrow, was “suboptimal because we now know from the CLL14 study that undetectable MRD in the bone marrow alone is a better predictor of progression-free survival with a venetoclax-obinutuzumab based regimen than complete remission by iwCLL criteria.”

Still, the phase II results were solid enough for a phase III trial to move forward that will evaluate acalabrutinib-venetoclax, with and without obinutuzumab, versus chemoimmunotherapy for previously untreated CLL.

Acalabrutinib was FDA-approved in 2019 for use in adults with CLL or small lymphocytic lymphoma (SLL) based on progression-free survival findings from the ELEVATE-TN and ASCEND trials.

ELEVATE-TN data were presented at the 2020 European Hematology Association (EHA) congress, and four-year follow-up data were shared at the 2021 American Society of Clinical Oncology meeting. It was a head-to-head trial of acalabrutinib versus ibrutinib in previously treated CLL.

“What we’ve learned from this study is that a second-generation BTK inhibitor, acalabrutinib, is at least as good as ibrutinib…survival was favorable, and it’s much better tolerated by patients. This enables potentially better combination approaches for CLL patients with this second-generation molecule,” ELEVATE-TN co-investigator John Byrd, MD, of the Ohio State University College of Medicine in Columbus, told eCancer TV.

ELEVATE-TN co-investigator Jeff Sharman, MD, of the Willamette Valley Cancer Institute in Eugene, Oregon, told eCancer TV at EHA that “BTK inhibitors have become perhaps one of the most important drug classes in the management of chronic lymphocytic leukemia. These oral medications combine some of the highest efficacy rates that we’ve seen in the published literature in this disease and, at the same time, have a considerably improved toxicity profile relative to the historical chemotherapy regimens that we used.”

As for ASCEND, that phase III trial looked at acalabrutinib versus idelalisib plus rituximab, or bendamustine plus rituximab, in relapsed or refractory CLL. Data were presented at the 2020 American Society of Hematology virtual meeting and published in the Journal of Clinical Oncology. In terms of adverse events (AEs) in ASCEND, “acalabrutinib appeared to be the safest. The typical adverse event with acalabrutinib was headache… it’s something that happens after the first [dose] and it lasts only a couple of weeks…and it’s usually mild, grade 1 or 2,” explained ASCEND investigator Paolo Ghia, MD, PhD, of the Università Vita-Salute San Raffaele in Milan, Italy, in a CLL Society interview.

In the current trial, acalabrutinib’s safety profile was reinforced. Davids’ group reported that one patient needed a dose reduction because of grade 3 headache but was “successfully increased back to full dose 1 month later.” Serious AEs occurred in 24% of all patients, with neutropenia being the most common (8%).

The open-label study enrolled treatment-naïve patients with CLL or SLL, according to iwCLL 2018 criteria, from August 2018 to May 2019. They had an Eastern Cooperative Oncology Group (ECOG) performance status (PS) of 0 to 2. Median follow-up was 27.6 months. The median age of the 37-patient cohort was 63, and 89% were non-Hispanic White, while 73% were male. More than half had an ECOG 1 PS. Over a quarter were TP53-aberrant with high-risk features of both TP53 mutation and 17p deletion, and 24% of patients expressed mutated IGHV status.

The agents were combined into a triplet of 28-day therapy cycles in an effort to induce durable remissions in the cohort, Davids and co-authors explained. The protocol consisted of:

All trial patients received at least one dose of any study drug. One patient discontinued the study due to an AE during therapy cycle 5, while the remaining 36 continued on to at least the end of cycle 15.

As of data cutoff on May 11, 2021, four patients were still on acalabrutinib-venetoclax therapy.

Study limitations were a relatively short follow-up time for a first-line therapy study and a small cohort size. In addition, the authors conceded that “a crucial question in [CLL] therapy is whether the addition of obinutuzumab enhances efficacy. Without a doublet therapy comparator group, we cannot directly address what benefit obinutuzumab is adding to acalabrutinib and venetoclax.”

Co-authors reported support from the NIH and relationships with multiple entities including AstraZeneca and Genentech.