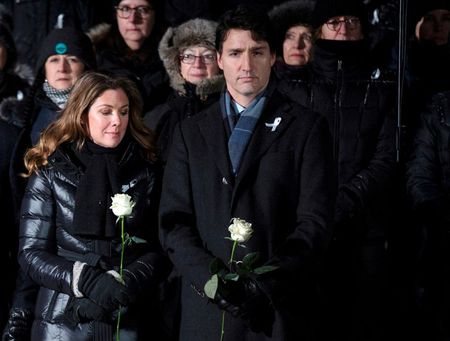 OTTAWA (Reuters) – Canadian Prime Minister Justin Trudeau and his wife Sophie are in self-isolation after she came down with flu-like symptoms and was tested for the new coronavirus, according to an official statement on Thursday.

The 48-year-old Liberal leader is exhibiting no symptoms and will continue to work from home until the results of his wife’s test comes in, the statement said. However, face-to-face meetings with provincial premiers scheduled for Thursday and Friday will instead be held by phone.

“She immediately sought medical advice, and is being tested for the COVID-19 virus. She is self-isolating at home awaiting test results, and her symptoms have since subsided.”

The statement does not mention whether their three children are staying home as well.

Trudeau’s announcement comes as the spread of the new coronavirus appears to be gathering steam and as authorities canceled major events to try to limit contagion.

Canada had just over 100 confirmed cases of the new coronavirus as of Wednesday, more than double the number from a week ago. With Manitoba and New Brunswick reporting their first presumptive cases in the past 24 hours, six of Canada’s 10 provinces have recorded COVID-19 contagion.

Two other ministers with flu-like symptoms have gone into self-isolation in recent days as they awaited test results for the virus. Indigenous Services Minister Marc Miller said that the rest of the cabinet had not been instructed to self-isolate.

Trudeau’s move is “a precautionary measure, and should Canadians find themselves in a similar situation, that is the recommendation,” Miller said.

Ontario, the country’s most populous province, reported 17 new cases overnight, a 40%. In Alberta, Suncor Energy spokeswoman Erin Rees said a pre-school child in Calgary who attended a daycare in one of its buildings had tested positive for coronavirus.

The daycare was closed and children and their families were advised to self-quarantine, Rees said. Alberta health officials have not confirmed the case.

All 360 people working at the Ottawa office of the Superintendent of Financial Institutions – Canada’s top financial services regulator – were asked to start working from home on Thursday after an employee was tested for the coronavirus, said spokesman Michael Toope.

Trudeau’s government committed C$1 billion ($723 million) on Wednesday toward bolstering the healthcare system and limiting the impact of the virus.

The government of Ontario, the province that has reported the highest number of cases, has set aside C$100 million in “contingency funding”, Premier Doug Ford told reporters on Thursday.

(Reporting by Steve Scherer; additional reporting by David Ljunggren and Kelsey Johnson in Ottawa and Moira Warburton in Toronto; Editing by Bernadette Baum and Alistair Bell)