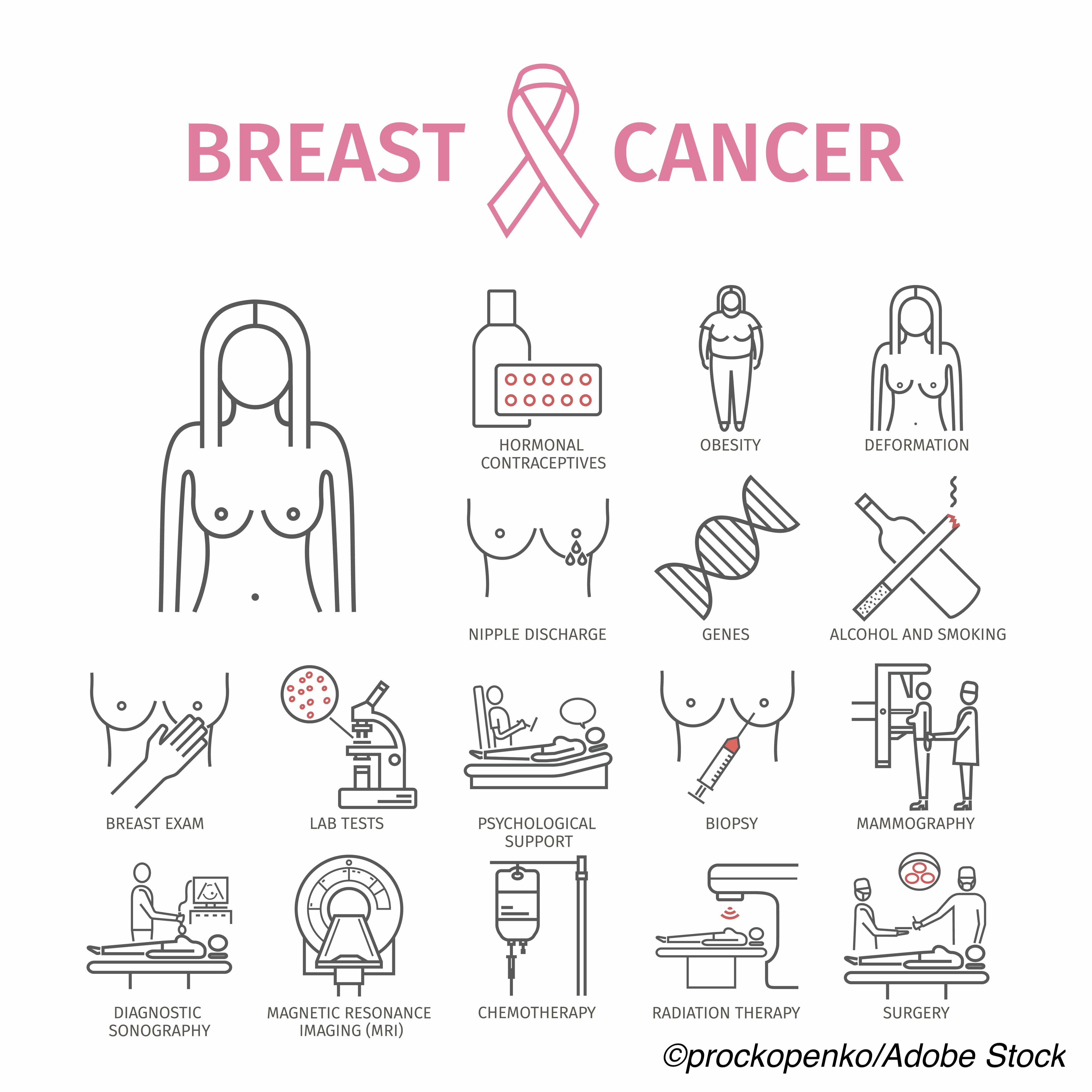 Pathogenic variants in the ATM, BRCA1, BRCA2, CHEK2, and PALB2 genes are associated with an increased risk of breast cancer, according to results from an analysis of data from the 17 studies that comprised the population-based Cancer Risk Estimates Related to Susceptibility (CARRIERS) consortium. CARRIERS researchers also found that pathogenic variants in three additional genes—BARD1, RAD51C, and RAD51D—were associated with increased risks of estrogen receptor (ER)-negative breast cancer in the general population.

Results from a European trial by the Breast Cancer Association Consortium supported these results with findings of an association between protein-truncating variants in the same five genes—ATM, BRCA1, BRCA2, CHEK2, and PALB2—and significantly higher risks of breast cancer. Further, they found that pathogenic variants in four other genes—BARD1, RAD51C, RAD51D, and TP53 — were also associated with high breast cancer risks.

“[L]arge-scale population-based studies that provide estimates of the prevalence of pathogenic variants in predisposition genes in the general population are lacking,” according to the CARRIERS’ analysis senior author Fergus Couch, PhD, of the Mayo Clinic, Rochester, MN, and fellow researchers, who published their results in The New England Journal of Medicine.

For this analysis, they conducted gene sequencing with a multigene amplicon-based panel to identify germline pathogenic variants in 28 cancer-predisposition genes. From the CARRIERS studies, they included 32,247 women with breast cancer and 32,544 women without breast cancer who served as the control group.

“To date, the management recommendations for women with pathogenic variants in these genes have been based on risk estimates from studies involving women at high risk. We anticipate that the estimates from the population-based CARRIERS analysis will inform cancer screening and other risk-management strategies for women with pathogenic variants in cancer-predisposition genes in the general population,” concluded Couch and colleagues.

In the study conducted by the Breast Cancer Association Consortium, also published in The New England Journal of Medicine, researchers led by Douglas F. Easton, PhD, of the Centre for Cancer Genetic Epidemiology at the University of Cambridge, Cambridge, England, conducted genetic sequencing in a panel of 34 known susceptibility genes from 60,466 women with breast cancer and 53,641 controls to assess the missense-variant association by domain and classification of pathogenicity.

Limitations in the CARRIERS analysis included restricted enrollment to women ≥50 years old, penetrance estimation based on population-based rates, and that the genetic sequencing was conducted in research laboratory sequencing instead of in commercial genetic-testing facilities.

Limitations of the study from the Breast Cancer Association Consortium include that analyses of associations in rare variants are susceptible to bias, as is testing for cancer susceptibility genes in genetics clinics.

“These two studies pose important clinical questions. Should we start discussing with our patients each gene shown to have an association with breast cancer risk in these two studies before offering a panel test? Should the 28 extraneous genes be removed from the panels?”

Ultimately, he conceded the value of both studies.

“The studies… are useful in that they help to establish the genes that confer a predisposition to breast cancer and those that do not,” he noted.

Narod concluded, however, with a cautionary note: “These studies are less helpful in refining the lifetime cancer risks for women with mutations. I do not think it is prudent at this time to revise these risk estimates downward on the basis of new results.”

The study from the CARRIERS consortium was supported by the National Institutes of Health, the NIH Specialized Program of Research Excellence (SPORE) in Breast Cancer, and the Breast Cancer Research Foundation.

Couch has worked on continuing education for Ambry Genetics, consulted for AstraZeneca, and is on the speakers’ bureau for Qiagen Sciences LLC.

Easton and Narod reported no disclosures.