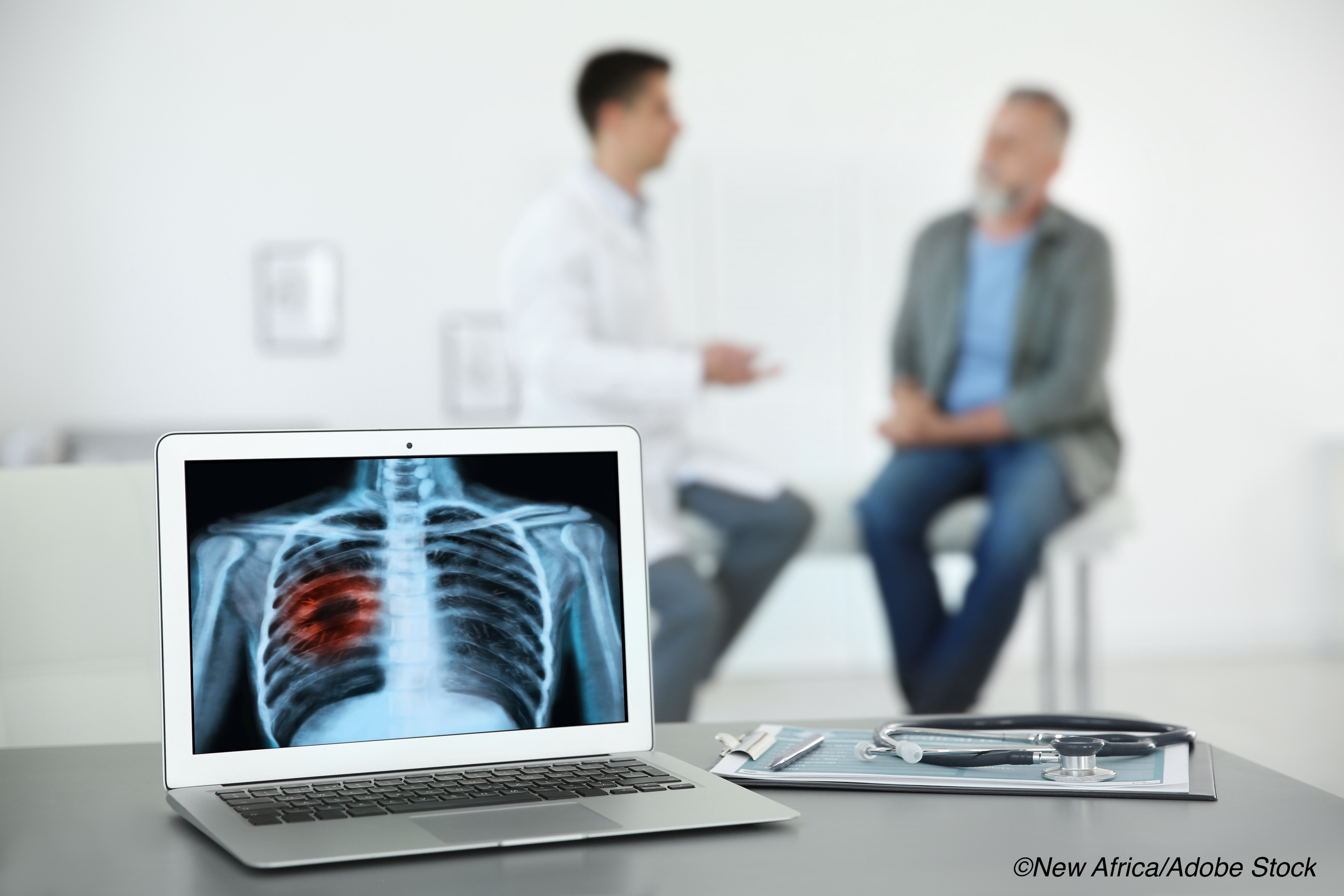 The revised recommendations drop the eligibility age for low-dose CT-based screening to age 50 and lowers smoking history from 30 to 20 pack years; however, they still call for stopping annual screening in people who have not smoked for 15 years or have limited life expectancy because of comorbidities that also would restrict the ability to undergo lung surgery.

“This recommendation replaces the 2013 USPSTF recommendation on screening for lung cancer,” explained Alex H. Krist, MD, MPH, of Virginia Commonwealth University in Richmond, and co-authors in JAMA, although the 2021 version still carries a “B” grade (“moderate certainty” of a net benefit). “The USPSTF found adequate evidence that annual screening for lung cancer with LDCT in a defined population of high-risk persons can prevent a substantial number of lung cancer–related deaths.”

Besides changes to eligibility criteria, other advice from the task force in the recommendations includes:

With regard to potential LCS harms, these include “false-positive [FP] results leading to unnecessary tests and invasive procedures, incidental findings, short-term increases in distress due to indeterminate results, overdiagnosis, and radiation exposure,” Krist and co-authors acknowledged. However, they maintained that there was “adequate evidence that the harms of screening for lung cancer with LDCT are moderate in magnitude.”

Several accompanying opinion articles augmented the pros and cons of the updated recommendations.

“This update is timely because many more studies regarding LCS have been published,” noted Christopher G. Slatore, MD, MS, of the VA Portland Health Care System in Oregon, and co-authors in a JAMA Oncology editorial.

Unfortunately, uptake and the infrastructure to provide LCS have not necessarily kept up with the science: “With this update…the population eligible for LCS will increase from an estimated 14.1% to 22.6%. Increasing the number eligible without increasing the means to do so will very likely perpetuate the problem of limited implementation,” they cautioned.

Future research should take on the task of pinpointing “effective strategies to reach and engage the target population and ensure implementation of each core element for high-quality LCS,” Slatore’s group advised.

In a JAMA editorial, Ethan Basch, MD, of the Lineberger Comprehensive Cancer Center at the University of North Carolina at Chapel Hill, and co-authors added to concerns about LCS’ reach by pointing out that neither NLST nor NELSON enrolled never-smokers, while minorities were underrepresented in NLST, and NELSON skipped a subgroup analysis of at-risk women.

Minorities and women “develop lung cancer at an earlier age and with lower smoking histories than the predominantly White and male populations enrolled in the original [NLST]… [t]he incidence of lung cancer in the U.S. is highest among Black individuals, and the highest mortality rate of all racial groups occurs in Black male individuals,” explained Yolonda L. Colson, MD, PhD, of Massachusetts General Hospital in Boston, and co-authors in a JAMA Surgery editorial.

Other barriers to undergoing LCS include lack of insurance or inadequate insurance, and geographical hardships, which are especially problematic because the updated recommendations drop the “screening-eligible age to 50 years… [w]hile expanded eligibility criteria are an important step toward equity… complex implementation issues [need] to be addressed,” Basch’s group noted, adding that the American Thoracic Society has taken a first step with strategies to broaden LCS’ purview.

Beyond these hurdles, Basch’s group emphasized that “the future of screening strategies lies in individualized risk assessment including genetic risk. The 2021 USPSTF recommendation statement represents a leap forward in evidence and offers promise to prevent more cancer deaths and address screening disparities. But the greatest work lies ahead to ensure this promise is actualized.”

Colson and co-authors backed the assertion that guidelines are good, but are not good enough, as it takes a village to build a thriving LCS program: “Success requires access and willingness to undergo screening and follow-up within a coordinated multidisciplinary lung cancer screening program composed of primary care physicians, diagnostic radiologists skilled at pulmonary nodule detection and management, and multidisciplinary specialists including thoracic surgeons, interventional radiologists, pulmonologists, radiation specialists, and medical oncologists experienced in lung cancer care,” they wrote.

They advocated for continued coverage of LCS by CMS, and the mandated SDM model, as the latter “has been shown to increase knowledge of the tradeoffs between benefits and harms of screening decisions, improve perceptions of risk, improve communication with clinicians, reduce decisional conflict, and help clarify personal values.” Hoffman’s group cited a 2020 systematic review of SDM for LCS that “found that they increased patients’ knowledge, reduced decisional conflict, and were highly acceptable to patients and clinicians.

They also underscored that SDM “may also improve health equity around lung cancer,” but only if it can be “tailored for culturally diverse populations and those with low health literacy and numeracy,” such as an LCS program based in an Hispanic urban location near the University of Miami.

For the evidence report, Daniel E. Jonas, MD, MPH, of The Ohio State University in Columbus, and co-authors looked at 223 pieces of research, including seven randomized controlled trials. Besides the two major trials, others reviewed were DANTE and ITALUNG (Italy), DLCST (Denmark), and LUSI (Germany).

As for the other trials, “Taken together, there is moderate evidence to suggest that, compared with no screening, persons who receive LDCT screening do not have worse general HRQoL [health-related quality of life], anxiety, or distress over 2 years of follow-up,” the authors said.

While LCS was tied to FP results that could lead to a cascade of negative outcomes, “Most studies reviewed in this article (including the NLST) did not use current nodule evaluation protocols such as Lung-RADS… A study included in this review estimated that Lung-RADS would reduce false-positive results compared with NLST criteria and that about 23% of all invasive procedures for false-positive results from the NLST would have been prevented by using Lung-RADS criteria,” Jonas’ group wrote.

Review limitations included the fact that trials were primarily performed at large, academic centers, so application to community-based practice is uncertain. Also, studies with a sample size of >1,000 were excluded, and that research may have offered more data on LCS harms.

For the modeling study, Rafael Meza, PhD, of the University of Michigan in Ann Arbor, and co-authors, created comparative simulation modeling with four lung cancer natural history models, from the Cancer Intervention and Surveillance Modeling Network (CISNET), for people born in 1950 and 1960 who were followed from age 45 through age 90.

They found that most of the efficient risk factor–based LS strategies started screening at ages 50 or 55 years and stopped at age 80. Meza’s group also reported that the 2013 USPSTF LCS recommendations — ages 55-80 and 30-pack years — “were not among the efficient strategies for the 1960 U.S. birth cohort.”

However, yearly strategies with a minimum criterion of 20 pack-years of smoking were efficient and, compared with the 2013 USPSTF-recommended criteria, were estimated to:

The authors added that risk model-based approaches — such as those from the 2013 recommendations — were estimated to be linked with more benefits and fewer radiation-related deaths but more overdiagnosed cases, versus risk factor-based strategies, such as the PLCOm2012 model and the BACH model.

Study limitations included the assumption of 100% uptake of, and adherence to, LCS, and lack of data on incidental findings or adverse events related to screening. Slatore and co-authors added LCS uptake/adherence in the real world, which is already dismally low at an estimated 5%/12%, respectively, is even lower in ethnic groups and those with mental health issues, so “these real-world issues will drastically reduce the benefits predicted by the model as well as the expected benefits and harms for different groups.”

As for how the new recommendations stack up against those from other professional groups:

Colson and co-authors reported no relationships relevant to the contents of this paper to disclose.