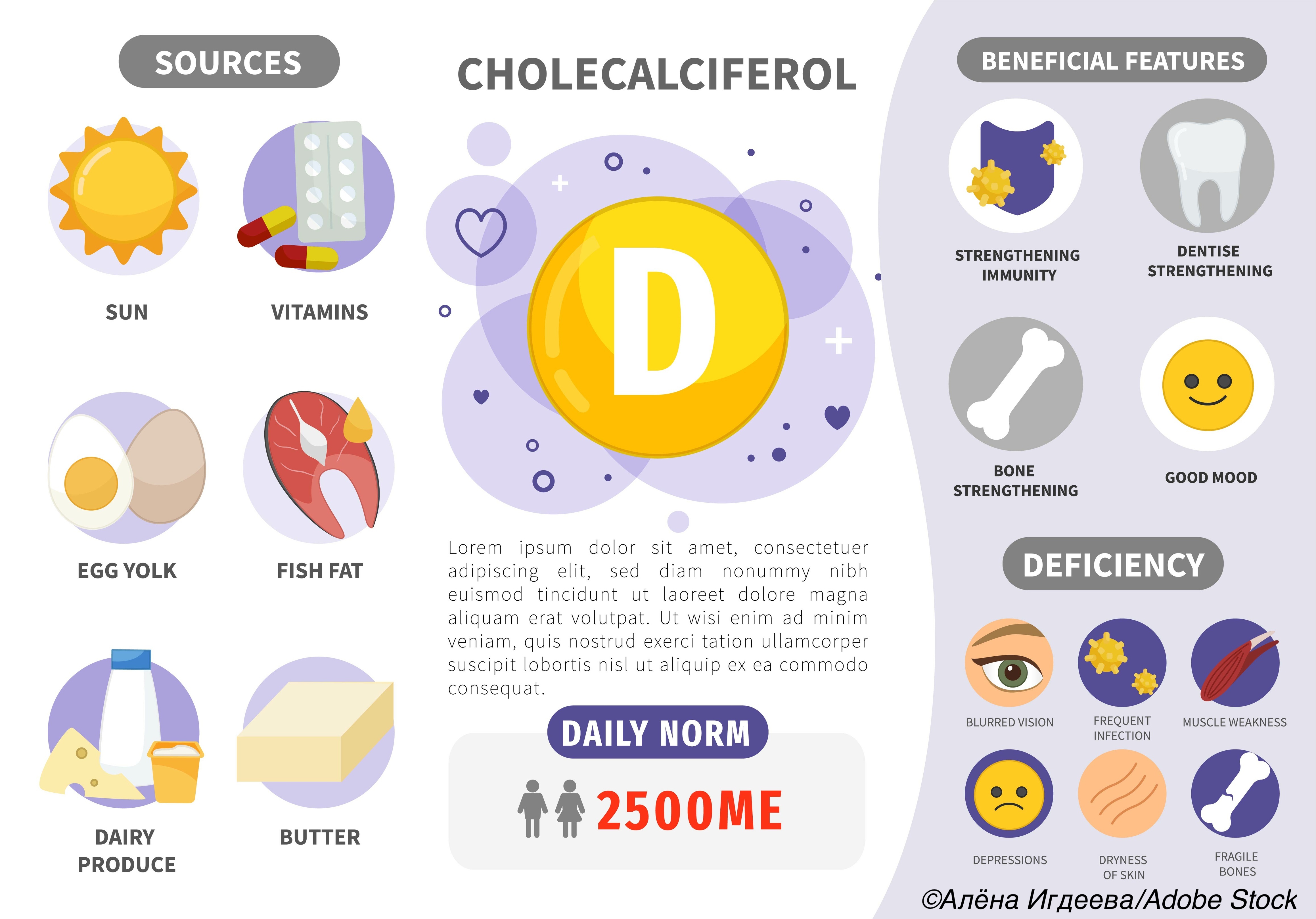 There’s not enough evidence on the benefits and harms of screening in asymptomatic adults, task force holds

There’s no point routinely checking vitamin D levels in people without obvious symptoms of vitamin D deficiency, according to the U.S. Preventive Services Task Force (USPSTF), who based their decision on the meager current evidence in support of screening.

While they noted that the evidence was “adequate” that “treatment of asymptomatic vitamin D deficiency has no benefit on…a few health outcomes,” most of the data on benefits of treatment remain “inadequate.”

The “I” grade (“insufficient” evidence) 2021 recommendation may be good enough for people with asymptomatic vitamin D deficiency, but it does not apply to “individuals who are hospitalized or institutionalized or to those who have underlying conditions (e.g., osteoporosis, osteomalacia, malabsorption, or chronic kidney disease) or take medications that increase the risk of vitamin D deficiency,” stressed Sherri-Ann M. Burnett-Bowie, MD, MPH, of Massachusetts General Hospital in Boston, Anne R. Cappola, MD, ScM, of the University of Pennsylvania in Philadelphia, in an accompanying editorial.

By limiting their advice to asymptomatic adults, “the USPSTF recommendation does not provide clinicians with a clear recommendation for the group of ’symptomatic’ adults who would potentially benefit from 25(OH)D testing and treatment,” they pointed out.

Additionally, the task force “did not review emerging evidence on Covid-19 and vitamin D,” they stated, although vitamin D has certainly gotten its time in the sun during the pandemic. In a pair of 2020 commentaries, experts called for “eliminating vitamin D deficiency [to] improve public health during the current pandemic and after the [Covid-19] threat subsides” and for boosting “recommended amounts to 50 nmol/L… by supplementation with at least 800 IU per day (20 micrograms per day).”

And, in a 2020 Instagram chat, Anthony Fauci, MD, director of the National Institute of Allergy and Infectious Diseases said “I would not mind recommending — and I take it myself — taking vitamin D supplements.”

But a January 2021 JAMA news article called the evidence supporting the role of vitamin D in Covid-19 “mixed and sparse,” with one study showing that regular pre-pandemic vitamin D supplementation was linked with less severe disease and better survival, but another indicating that taking vitamin D supplements was associated with a higher risk of dying for in-hospital patients with SARS-CoV-2 infection.

So, how can clinicians use the current guidelines in a practical way? One option is to simply not screen, but to “ensure that all individuals consume the age-based recommended daily,” while prescribing a somewhat higher dose of vitamin D to “individuals at increased risk for vitamin D deficiency,” such as those with limited sun exposure malabsorption or altered gastrointestinal anatomy, or chronic kidney disease, Burnett-Bowie and Cappola said.

In a JAMA Patient Page, Jill. O. Jin, MD, MPH, of Northwestern Medicine in Chicago, noted that in the U.S., “many foods are fortified with vitamin D (such as milk, formula, and cereals). Most of the vitamin D the human body uses is made by the skin as a result of exposure to sunlight.” The Skin Cancer Foundation states that, “no matter how much sunscreen you use or how high the SPF, some of the sun’s UV rays reach your skin… it doesn’t take much sun exposure for the body to produce vitamin D… no more than 10 to 15 minutes of exposure to arms, legs, abdomen and back, two to three times a week, followed by good sun protection. That minor amount of exposure produces all the vitamin D your body can muster.”

The recommendation is based on an evidence report by Leila C. Kahwati, MD, MPH, of RTI International in Triangle Park, N.C., and co-authors, also published in JAMA. They looked at English-only randomized clinical trials (RCTs) of screening with serum 25-hydroxyvitamin D (25[OH]D) versus no screening, or treatment with vitamin D, with or without calcium, versus placebo or no treatment in non-pregnant adults. Non-randomized controlled intervention studies were evaluated only for harms, and “treatment was limited to studies enrolling or analyzing participants with low serum vitamin D levels.”

The main outcomes of their review were mortality, incident fractures, falls, diabetes, cardiovascular events (CVD), cancer, depression, physical functioning, and infection. Kahwati’s group reported that treatment was not tied to any of the outcomes in community-dwelling populations:

In terms of adverse events (AEs) associated with treatment, some studies reported AEs such as abdominal discomfort, rash/hives, constipation, and itching. The occurrence of kidney stones was also low in 10 relevant RCTs, according to Kawati and co-authors.

Of course, no “studies directly evaluated the health benefits or harms of screening for vitamin D deficiency,” they noted, thus backing up the call by Krist and co-authors for more research on whether total vitamin D levels are the best measure of deficiency; what the best cutoff would be for defining deficiency; and whether both of those factors would vary by race, ethnicity, or sex.

The USPSTF recommendation aligns with those from other groups — the American Society for Clinical Pathology, the American Academy of Family Physicians, The Endocrine Society — that do not recommend screening for vitamin D deficiency in the asymptomatic general population.

USPSTF members reported travel reimbursement and an honorarium for participating in USPSTF meeting.

Cappola reported serving as JAMA associate editor and a relationship with GlaxoSmithKline.

Burnett-Bowie, as well as Kahwati and co-authors, reported no relationships relevant to the contents of this paper to disclose.