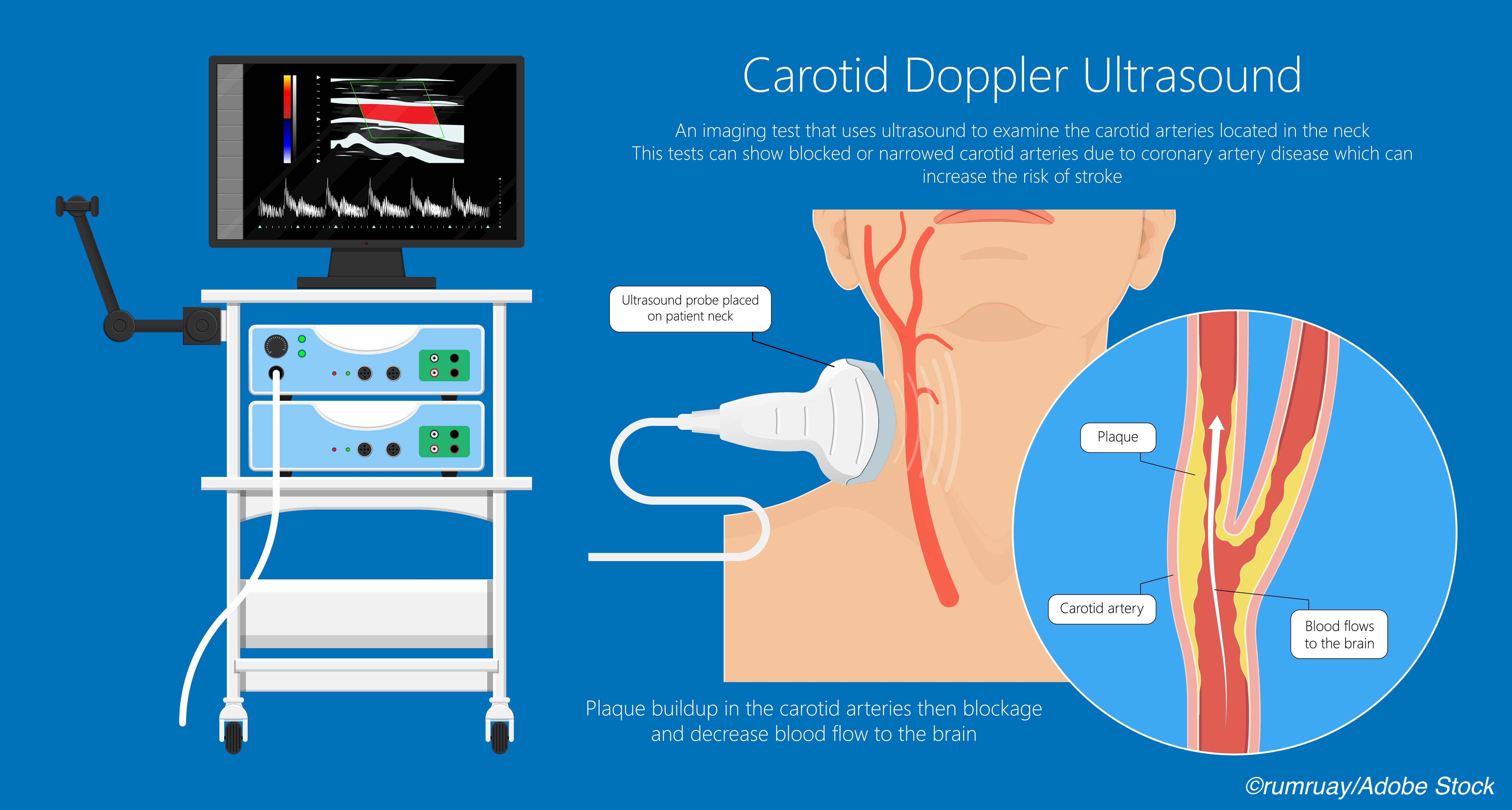 In an updated recommendation, the task force maintained its “D” grade recommendation for screening, reiterating that “the harms of screening for asymptomatic [CAS] outweigh the benefits” in “adults without a history of stroke or neurologic signs or symptoms of a transient ischemic attack [TIA],” wrote Alex H. Krist, MD, MPH, of Virginia Commonwealth University, Richmond, VA, and co-authors, in JAMA.

They conceded that there is “Adequate evidence that duplex ultrasonography has reasonable sensitivity and specificity for detecting clinically relevant” CAS, but the imaging study also “yields many false-positive results when screening the general population.”

Krist’s group also pointed out that there is “Adequate evidence” that treating asymptomatic patients with CAS, either with carotid artery angioplasty and stenting or carotid endarterectomy (CEA), “provides no to small benefit in reducing adverse health outcomes, including stroke, myocardial infarction, or mortality, compared with current medical therapy.”

Finally, there is “Inadequate direct evidence that screening for asymptomatic [CAS] reduces adverse health outcomes such as stroke or mortality,” they stated. “Using a reaffirmation process, the USPSTF concludes with moderate certainty that screening for asymptomatic carotid artery stenosis in the general population has no benefit and may be harmful.”

While the updated recommendation is fairly cut and dry, opinions on it are more nuanced.

In an accompanying editorial inJAMA Neurology, Seemant Chaturvedi, MD, of the University of Maryland School of Medicine, Baltimore, called the update “reasonable,” especially without a “well-done clinical trial,” to justify “a change in the overall recommendation that routine screening is not warranted.”

Future results from the ongoing CREST 2 trial may alter that, Chaturvedi acknowledged, but in the meantime, “we should recognize that the majority of patients with ICA [internal carotid artery stenosis] already merit intensive medical therapy either because of established vascular disease (ischemic heart disease or peripheral artery disease) or because of the presence of a single or multiple risk factors (hypertension, diabetes, dyslipidemia, etc.).”

In an accompanying editorial in JAMA Internal Medicine, Salomeh Keyhani, MD, MPH, of San Francisco VA Medical Center, San Francisco, and Eric M. Cheng, MD, of the University of California, Los Angeles, noted that the USPSTF has consistently come out against CAS screening in asymptomatic adults (2007 and 2014). Other medical groups have done the same, including the Society for Vascular SurgeryAmerican College of Cardiology along with a host of other societies; the American Academy of Family PhysiciansChoosing Wisely” campaign.

In an accompanying editorial in JAMA Network Open, Rebecca Smith-Bindman, MD, and Kirsten Bibbins-Domingo, PhD, MD, MAS, both of the University of California, San Francisco, highlighted that the recommendations against CAS screening from these various specialty societies also come with “list of exceptions of individuals who, based on risk factors or other characteristics, should in fact be screened. The risk factors for stroke, such as high blood pressure, hyperlipidemia, diabetes, and lifestyle factors, including smoking, limited physical activity, and poor diet, are present in nearly one-third of US adults, and there are no validated combinations of these risk factors to identify individuals who might benefit from screening.”

And recommendations don’t always make it easily from expert panel to practice, Keyhani and Cheng noted, explaining that “[t]here [are] no national data available on how the USPSTF and other recommendations against use of screening for [CAS] have affected practice. The billing codes for screening are nonspecific, and obtaining national estimates is challenging.”

However, Smith-Bindman and Bibbins-Domingo cited other data, showing that “[a]n estimated 1.3 to 1.6 million asymptomatic individuals undergo screening for [CAS] every year. Data from 2009 Medicare claims found that screening for asymptomatic [CAS] occurred in 6.6% of Medicare beneficiaries, a similar prevalence to that observed in a study of integrated health systems in 2016.” The latter study was conducted by Smith-Bindman and colleagues, while the data from 2009 Medicare claims was cited in a research letter by Janelle M. Guirguis-Blake, MD, of Kaiser Permanente Research Affiliates EPC at the University of Washington, Seattle, and co-authors that served as the evidence report for the current USPSTF guideline.

Additionally, private companies, “such as HealthFair and Lifeline screening bring portable equipment and mobile vans to community centers and charge between 100-400 dollars for screening ’packages’ [for heart disease and stroke prevention],” according to a 2018 Public Health Reviews article.

HealthFair — the subject of a 2014 complaint from Public Citizen against its “unethical” cardiovascular (CV) screening programs — was acquired by an Arizona-based company in 2018 that continues to operate its fleet of mobile health units with ultrasound equipment on board, per the Orlando Sentinel. Lifeline is still in the business of preventive health services, including a $149 screening package for stroke and CV disease risk.

All the editorialists agreed that trials such as CREST 2 are vital, but Keyhani and Cheng cautioned that these findings come with caveats, such as participating surgeon selection from top academic centers, a pre-trial training phase to “ensure a low perioperative complication rate;” exclusion of patients with significant comorbidities; and the challenge of taking trial results from bench to bedside.

They pointed out that “in practice, many patients who are revascularized do not live long enough to benefit from stroke reduction” and that their own “recent comparative effectiveness research…demonstrated no benefit to CEA in community settings.”

Finally, Smith-Bindman and Bibbins-Domingo stressed that, moving forward, recommendations will be rightfully swayed by “new surgical treatments that will have varying benefit-to-harm ratios…judged against also improving general medical therapies that would be recommended regardless of the screening. None of these studies of treatments would address the larger issue of whether to screen with carotid ultrasonography and who is most likely to benefit.”

For the evidence report, Guirguis-Blake and co-authors evaluated published original data from January 2014 to February 2020, and then ongoing surveillance research through November 2020. They settled on 2,373 titles and abstracts, plus 144 full-text articles, and considered four “key questions” focused on any benefits or harm of CAS screening in those without symptoms, benefits of revascularization beyond medical therapy, and harms tied to revascularization.

They found that “No eligible studies were identified that directly examined the benefits or harms of screening for asymptomatic [CAS].” Also, two “limited, prematurely terminated trials” — SPACE-2 and AMTEC — “reported mixed results for the comparative effectiveness of carotid revascularization plus best medical therapy compared with best medical therapy alone.”

For now, how can clinicians best discuss the harms and risks of CAS screening? In a JAMA Patient Page, Jill Jin, MD, MPH, of Northwestern Medicine in Chicago, emphasized the following:

The USPSTF is funded by the Agency for Healthcare Research and Quality (AHRQ). The research letter was funded by AHRQ.

Bibbins-Domingo reported serving as a member of the USPSTF from 2010 to 2017 and as an author of the 2014 USPSTF recommendation.

Smith-Bindman and Keyhani and Cheng, as well as Guirguis-Blake, reported no relationships relevant to the contents of this paper to disclose.