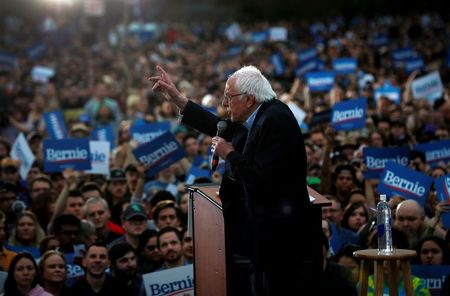 The proposal is the latest by the frontrunner Democratic candidate that would vastly expand America’s social welfare system as he seeks the nomination to challenge Republican President Donald Trump in the November election.

Sanders is proposing massive overhauls of the U.S. economy, including banning private health insurance in favor of a government-run system that guarantees universal health coverage, an approach already taken by many developed countries.

Sanders opponents, including centrist Democrats like Joe Biden and Michael Bloomberg, say his proposals are too expensive. Bloomberg is staking his candidacy in part on the argument that Sanders’ proposals are too radical to get through the U.S. Congress.

But on Monday, the Vermont senator pushed ahead with his latest example of his self-described “Democratic socialist” bona fides.

“We have a moral responsibility as a nation to guarantee high-quality care and education for every single child, regardless of background or family income,” the Sanders campaign said in a proposal posted on his website.

The childcare and early education proposal would push America in the direction taken by many other advanced countries by boosting access to publicly funded childcare and pre-kindergarten education.

At least 10 hours of childcare a day would be available from infancy through age three, the age at which early-education programs would kick in, according to Sanders’ proposal.

Sanders said the program would be paid for by taxing the wealth of the richest 0.1% of Americans.

Most developed country governments spend more than the United States does on childcare and early education.

In 2015, government in America spent the equivalent of 0.3% of national economic output on early childhood education and care, compared to 1.3% in France, 1% in South Korea and 0.6% in the United Kingdom, according to the Organization for Economic Co-operation and Development.

In France, about 56% of children age two and under are enrolled in childcare and early education, twice the 28% rate in the United States, according to the OECD.