Two elderly passengers from the quarantined Diamond Princess ship had died of the disease, Japanese public broadcaster NHK reported. The passengers were a man and a woman in their 80s, NHK said, citing an unidentified government source.

South Korea reported a spike in infections, with 23 new cases linked to a church congregation, up from 14 on Wednesday, in what health officials called a “super-spreading event”.

A 61-year-old woman known as “Patient 31” is suspected of passing the disease to others who attended religious services at a church in the central city of Daegu.

Hundreds of people are believed to have attended services with the woman in recent weeks at a branch of the Shincheonji Church of Jesus the Temple of the Tabernacle of the Testimony, a religious movement founded in 1984 by South Korean Lee Man-hee, who is revered as a messiah by followers.

Scientists in China who studied nose and throat swabs from 18 patients infected with the new coronavirus say it behaves much more like influenza than other closely related viruses, and could be passed on by people before they show symptoms.

The preliminary findings published on Wednesday in the New England Journal of Medicine offer evidence that the novel coronavirus is not like other coronaviruses such as Severe Acute Respiratory Syndrome (SARS).

“If confirmed, this is very important,” said Dr. Gregory Poland, a sinologist and vaccine researcher with the Mayo Clinic in Rochester, Minnesota, who was not involved with the study.

While the latest numbers on infections in mainland China suggest the epidemic there is slowing, it is unclear how much the fall in new cases is due to changes in diagnostic methodology or because fewer people are contracting the disease.

China’s central Hubei province, the epicenter of the outbreak, reported 349 new confirmed cases, down from 1,693 a day earlier and the lowest since Jan. 25. The death toll in the province rose by 108, bringing to total in China to over 2,100 deaths and 74,500 cases.

In Japan, the government has come under intense criticism for its handling of an outbreak on a cruise ship carrying about 3,700 people, that was placed in quarantine off Yokohama on Feb. 3.

A second group of about 600 Japanese and foreign passengers from the Diamond Princess was set to disembark on Thursday, after the first batch were released from quarantine a day earlier.

Hundreds of people who left the chip on Wednesday were placed in quarantine again in their home countries, with Australia and Hong Kong putting their returned citizens in supervised isolation for another two weeks.

Passengers arriving in Hong Kong were taken straight into quarantine at a new public housing estate. A contingent of Australian evacuees were placed in quarantine at an old mining camp outside Darwin in the country’s far north.

Even as the first passengers disembarked on Wednesday, Japanese authorities announced 79 new cases had been discovered on board, bringing the total to at least 620, over half of the known infections outside mainland China.

From the start, experts raised questions about quarantine on the ship. Passengers were not confined to rooms until Feb. 5. The day before, as passengers were being screened, ship events continued, including dances, quiz games and an exercise class.

The U.S. Centers for Disease Control and Prevention (CDC) said Japan’s efforts “may not have been sufficient to prevent transmission among individuals on the ship.”

“Unfortunately, cases of infection have emerged, but we have to the extent possible taken appropriate steps to prevent serious cases,” Kato said in a report by state broadcaster NHK.

With China’s Hubei province, home to some 60 million people, in virtual lockdown, strict limits on movement in several major Chinese cities, and bans on travel to and from the mainland, economists expect the world’s second-biggest economy to take a short-term hit from the epidemic.

Financial leaders of the world’s 20 largest economies (G20) said the coronavirus epidemic was a downside risk for the global economy, according to a draft communique prepared for a meeting on Feb. 22-23.

Australia’s Qantas Airways Ltd <QAN.AX> said on Thursday it will ground the equivalent of 18 planes, freeze recruitment and ask its 30,000 staff to use up annual leave as it grapples with falling demand in Asia due to the epidemic.

About 80% of scheduled airline capacity to, from and within China has been cut this week, with Chinese airlines the hardest hit. 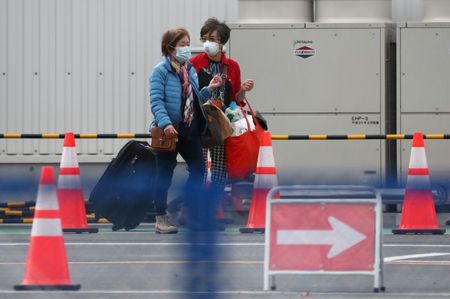 WHO creates foundation to boost funding in coronavirus fight