DETROIT (Reuters) – A surge in coronavirus cases in Detroit has put Michigan on track to be one of the U.S. states hardest hit by the pandemic, the city’s mayor said on Thursday, adding that hospitals were scrambling to increase capacity.

As the U.S. death toll from the virus passed 1,000 people, hospitals and government authorities in New York, New Orleans and other hot spots have grappled with a rush of cases and a shortage of supplies, staff and sick beds.

In Detroit, which had no cases about two weeks ago, the number had grown to 868 confirmed cases and 15 deaths as of midday on Thursday, the city’s chief public health officer, Denise Fair, said on a webcast briefing.

Statewide, Michigan authorities have so far reported 2,856 cases and 60 deaths, according to data compiled by Reuters. That puts it behind New York’s more than 37,000 cases and 385 deaths, but closer to New Jersey and California.

Detroit Mayor Mike Duggan said the surge in newly confirmed cases in and around the city, partially attributable to expanded testing, was “really concerning”.

Michigan was on pace to be among the top three states in the country in confirmed cases, and soon to surpass California, he said.

“We are preparing as if we get the kind of surge that New York had,” Duggan said at the briefing, adding that the city’s focus was on expanding capacity to treat the illness.

He admonished people to stop gathering in groups in violation of Michigan Governor Gretchen Whitmer’s stay-at-home order, which took effect on Tuesday.

Detroit authorities are hoping to expand drive-up testing from 100 slots beginning on Friday to up to 500 starting next week, which would require a doctor’s prescription based on symptoms and an appointment. Still, there is a mass shortage of tests.

“There is no question there are thousands and thousands of people in this state who have the virus. We’re just not testing them,” Duggan said.

Many clinics were turning away people who complained of fever, shortness of breath and other related symptoms, and under-resourced hospitals were advising individuals not facing emergency conditions to remain at home in quarantine.

Aside from occasional food shoppers and dog walkers, the streets of downtown Detroit were nearly deserted Thursday.

Brandon Allen, 48, bought groceries in midtown Detroit to drop off for his 72-year-old mother, who he said had tested positive for coronavirus several days ago. Along with the food, he brought her a bouquet of flowers.

“I told her my project, from me to you, is to keep these flowers alive,” Allen said. “She’s over there alone. She opened the garage door and I dropped them outside the door. We had to wave at each other through the window,” Allen said.

Allen, who was expecting the birth of a daughter next week, said he was worried about “bringing a baby into this pandemic” and criticized President Donald Trump’s handling of the crisis.

“You hear the stuff that he says and you just know you have to fend for yourself. He has no compassion,” Allen said.

(Reporting by Michael Martina and Rebecca Cook in Detroit; Editing by Tom Brown) 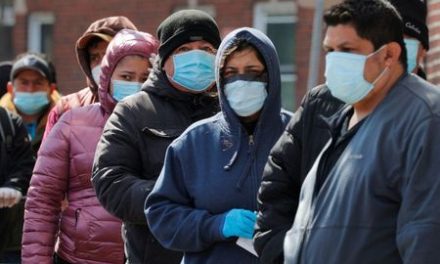