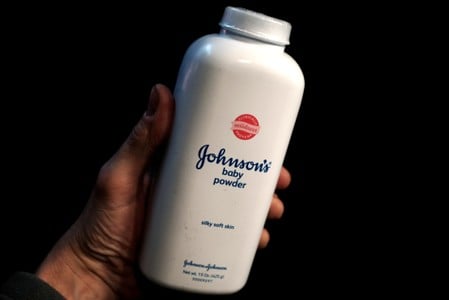 By Chad Terhune and Lisa Girion

(Reuters) – Ever since Johnson & Johnson disclosed this month that a government test had turned up asbestos in its Baby Powder, the company has attacked the validity of the result.

On Tuesday, for example, J&J announced that other labs it hired ultimately found no asbestos in samples from the bottle tested by the U.S. Food and Drug Administration or from the same production lot.

In challenging the FDA’s finding, however, the healthcare giant is casting doubt on one of its own experts.

The private Maryland lab that found asbestos in Baby Powder under a contract with the FDA is run by a paid expert witness for J&J.

Andreas Saldivar, laboratory director of AMA Analytical Services Inc, has served as a litigation expert on several occasions for J&J since 2017 in its defense against plaintiffs’ claims that asbestos in talc caused their cancers.

He testified in a May 2018 deposition that testing he did in 2010 for the FDA showed no evidence of asbestos in Johnson’s Baby Powder, helping to bolster the company’s argument that its iconic brand is safe.

Saldivar’s lab began testing cosmetic talc products for the FDA again this year, and in September it found asbestos in an unmarked sample that the FDA later identified as Johnson’s Baby Powder.

“I have never heard of anything like this,” said Richard Ausness, a University of Kentucky law professor who specializes in product liability, referring to Saldivar’s dual roles. “This is bad news for J&J. The plaintiffs are clearly going to say this lab director worked for J&J for years, and he found asbestos so there must be asbestos there.”

J&J’s challenge now is to discredit the single test result as erroneous without undermining the reputation and track record of its expert witness, Ausness said.

“J&J could try to frame it as not so much this lab director is unreliable or incompetent, but false positives do happen and additional tests are called for,” Ausness said.

The company appeared to do just that on Tuesday, saying testing done by other laboratories J&J hired had found no asbestos in the same bottle of Baby Powder tested by Saldivar for the FDA, nor in the lot of Baby Powder recalled as a result of Saldivar’s finding.

In an interview with Reuters on Tuesday, FDA officials said they stood by the AMA lab and its results. They also said they were not surprised by J&J’s findings because contaminants are not uniformly dispersed throughout talc and different testing methods can yield varying results.

The company “would say the product is free of asbestos based on their testing, and we would say the opposite for that sample,” said Steve Musser, deputy director for scientific operations in FDA’s Center for Food Safety and Applied Nutrition.

Plaintiffs’ attorneys said Saldivar’s finding for the FDA could be detrimental to J&J’s defense in court. The company faces lawsuits from more than 16,000 people alleging that asbestos in its powders caused cancer.

The impact was immediate in one courtroom.

Hours after J&J disclosed the FDA’s asbestos finding on Oct. 18, a plaintiff’s lawyer, Nate Finch, asked an Indianapolis judge to let him tell the jury about it in a trial involving a 71-year-old woman who alleged that Baby Powder contributed to her cancer.

J&J’s lawyers opposed the request, arguing that the information could prejudice the jury against the company, but the judge granted Finch’s request. Days later, Finch told the judge his client had come to a confidential resolution with J&J, a trial transcript shows. Finch told Reuters he could not comment on the resolution.

J&J did not respond to questions about the Indianapolis case. The company declined to comment on Saldivar’s role in the FDA testing, or on how it might affect the company’s legal strategy going forward.

Under the FDA contract, his lab found asbestos fibers in the Baby Powder sample on Sept. 7, according to the lab’s report. J&J said it was notified of the finding by FDA officials on Oct. 16, prompting the company to recall 33,000 bottles “out of an abundance of caution.”

In response, some major U.S. retailers have said they are removing all 22-ounce bottles of Johnson’s baby powder from their shelves.

At the same time, the company has expressed suspicions about the finding, saying it had launched its own investigation “to determine the integrity of the tested sample, and the validity of the test results.”

On Friday, the FDA posted online Saldivar’s 16-page report to the agency on the analysis of J&J Baby Powder. In samples weighing less than a gram, the lab said it found six chrysotile asbestos fibers. Given that the samples were extremely small, the asbestos could amount to millions of fibers per gram, testing experts told Reuters.

While most people exposed to asbestos never develop cancer, for some, even small amounts are enough to trigger the disease years later. Just how small hasn’t been established. The World Health Organization and other health authorities recognize no safe level of exposure to asbestos, a known carcinogen.

“Since there are no known safe levels of asbestos, the FDA has asked manufacturers to voluntarily recall their products when fibers consistent with asbestos are found in them,” the agency said this month.

Several juries over the past two years have concluded that Baby Powder exposures caused cancer and have awarded plaintiffs more than $5 billion. Other juries have sided with J&J, and some cases have settled.

The FDA has never before announced that government testing found asbestos in J&J’s Baby Powder. Since the early 1970s, J&J has pushed back hard on reports of asbestos in its talc by outside scientists, plaintiffs’ experts and, on several occasions, by its own testing labs.

In an Oct. 3 deposition in a New York lawsuit, J&J Chief Executive Alex Gorsky dismissed the findings of asbestos over the years, saying “they were later shown to be inaccurate, incomplete and just not correct.”

Attacking Saldivar’s finding, some legal experts told Reuters, could hurt the company’s ability to use him as a witness in lawsuits and undercut its broader message to jurors and consumers. That message boils down to: Trust our experts.

But a product liability defense lawyer who helped organize a recent talc litigation symposium said the impact on pending cases could be limited because asbestos-related cancers are known to take decades to develop. The FDA’s new finding “would be difficult to tie” to cancers allegedly caused by long-ago exposures, said Edward Ulloa, a Los Angeles-based lawyer who does not represent J&J.

The FDA findings are “essentially anecdotal,” Ulloa said, “specific to that product and that particular sample.”

In its Tuesday announcement, J&J said that one of the labs it hired initially found asbestos in three samples of Baby Powder, but the lab determined that a portable air conditioner running when the samples were prepared was contaminated with asbestos. Subsequent tests in a different room found no asbestos, the company said.

NO EXPERIENCE, NO ASBESTOS

In 2010, when the AMA lab tested 34 talc products for the FDA, including Johnson’s Baby Powder, the lab had no experience looking for asbestos fibers in talc milled for powders and cosmetics.

Saldivar testified in several depositions that the lab’s work had previously focused on determining the amount of asbestos in old building products, such as vinyl flooring.

AMA made fast work of the 2010 FDA job, lab records reviewed by Reuters show. His lab examined 102 samples, three from each product, in a single day, using a method called transmission electron microscopy (TEM). That works out to less than five minutes per sample, assuming an eight-hour shift with no breaks.

Experts who have found asbestos in milled talc powders told Reuters they require anywhere from a half hour to a day per sample using TEM, and litigation records show they often look at more talc per sample than Saldivar has testified is the practice at AMA.

In a deposition earlier this year, Saldivar acknowledged that he looked at less talc per sample than others in the field and that looking at more talc “would raise your analytical sensitivity” – the ability to find any contamination. But he said he believed that his methods were sufficient.

After the AMA lab found no asbestos in 2010, the FDA cautioned against reading too much into the results – not because of the sensitivity of the test but because so few products were tested.

Though the agency has described the testing as using the “most sensitive techniques available,” it said the results “do not prove that most or all talc or talc-containing cosmetic products currently marketed in the United States are likely to be free of asbestos contamination.”

When J&J’s lawyers approached Saldivar a few years ago about serving as an expert and testing Baby Powder, they “wanted me to follow my protocols that I used on my FDA testing” in 2010, Saldivar testified in May 2018. In June, he testified that his lab had never found any asbestos in talc samples, including Baby Powder, that it had tested for J&J and other manufacturer defendants.

The testing by Saldivar’s lab for the FDA this year was a different story.

“This positive test turns up the heat on J&J,” said Nora Freeman Engstrom, a Stanford University law professor who studies complex litigation. “And their expert lit the match.”