Hypertension Trends in the U.S. 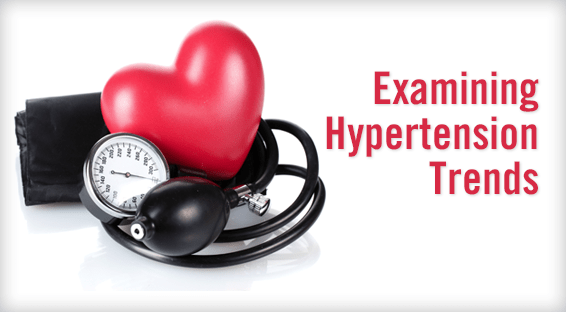 Healthy People 2020 is a national initiative that was launched in 2010 and outlines 10-year goals and objectives for health promotion and disease prevention. Reducing the burden of cardiovascular disease is part of the initiative, and Healthy People 2020 established the following goals for adults in the United States regarding blood pressure (BP) control.

A study published in Circulation assessed the current status and progress toward the Healthy People 2020 goals. For the analysis, Brent M. Egan, MD, and colleagues used the National Health and Nutrition Examination Surveys from more than 37,000 adults between 1999 and 2012 and looked at time trends data in 2-year blocks.

“The prevalence of hypertension changed very little over this period,” says Dr. Egan. “However, hypertension treatment and the proportion of treated adults who got their BP under control increased significantly.” Hypertension control—defined as reaching a BP of less than 140/90 mm Hg—increased every 2 years from 1999-2000 to 2009-2010 before leveling off slightly to just over 51% in 2011-2012.

Several modifiable risk factors were found to be strong predictors of BP control. Patients who visited their healthcare provider at least twice a year were 3.2 times more likely to keep their BP under control than those who saw their providers less frequently. Patients who had healthcare insurance and received treatment for high cholesterol also had a greater likelihood of keeping their BP under control. Brent M. Egan, MD, has indicated to Physician’s Weekly that he has no financial disclosures to report (beyond those provided in the original paper).