By Steven Scheer and Tova Cohen

TEL AVIV (Reuters) – Teva Pharmaceutical Industries is counting on its new migraine treatment to haul it out of the doldrums. But a possible delay in U.S. approval and looming pricing battle are making the task harder.

U.S. regulatory concerns about the manufacturing process could push approval of fremanezumab back to 2019. This is likely to put the Israeli drugmaker behind two of its rivals – Amgen and Eli Lilly – in the race to market for a migraine treatment, according to industry experts.

“Teva will have to align with the pricing dynamics of the prior two launches rather than lead the pricing policy with payers,” Meitav Dash Investments analyst Jonathan Kreizman said. “They won’t be able to impose any meaningful price differences from what already will be in the market.”

Analysts expect Amgen to announce a list price of up to $10,000 annually for monthly administered Aimovig.

U.S. buyers are already pushing for a lower price for Amgen’s treatment, plus a money-back guarantee if it doesn’t work. If the U.S. company concedes on these points, that would add to pricing pressure on Lilly and Teva when they enter the market.

Fremanezumab had been expected to receive the nod from the U.S. Food and Drug Administration in June, which would have likely made it the second to the crucial American market after Aimovig, which is expected to be approved next month.

However FDA concerns over the manufacturing facility at Teva’s partner Celltrion in South Korea, raised in February, could delay approval into next year. That could see Teva fall behind Eli Lilly, whose migraine drug galcanezumab is expected to receive the green light later this year.

Teva, the world’s biggest generics drugmaker, issues first-quarter results on Thursday and investors will be looking for any new information from the company regarding the expected timing of fremanezumab approval, and any progress in paying down its hefty debt and its cost-cutting measures.

Fremanezumab, which comes in monthly and quarterly doses, is crucial for Teva to bounce back after a torrid year. It is one of two drugs, along with Huntington’s treatment Austedo, that the company is banking on to help it return to growth.

Since last August, the world’s biggest generics drugmaker has seen its share price fall over 40 percent due to a decline in U.S. generic drug prices and copycat competition for its blockbuster multiple sclerosis drug Copaxone.

However analysts point to a bounce in Teva’s shares over the past four months and a slowing in the rate of decline of U.S. generic drug prices as bright spots.

A Teva spokesman said Celltrion was working to resolve concerns raised in the FDA’s warning letter.

“We are confident in our ability to launch and supply fremanezumab,” the spokesman said. “Teva is fully committed to our partnership with Celltrion and will assist them in every way we can.”

Teva also said it was “evaluating the pricing environment and will announce a price after approval”.

Celltrion said it was making progress addressing the concerns raised by the FDA.

Analysts expect Teva’s first-quarter revenue to fall about 15 percent to $4.8 billion and adjusted earnings to fall 37 percent to 67 cents a share, according to Thomson Reuters I/B/E/S.

“Anything much worse than that could unleash a wave of new selling, perhaps taking out key support at $15.50 and setting up a test of the previous lows from late last year,” said Steven Schoenfeld, founder of BlueStar Indexes, which develops indexes and exchange traded-funds that track Israeli stocks.

Teva’s New York-listed shares fell about 70 percent to a low of $10.85 in November but have since rallied to $18.80, putting the company’s market value at $19 billion. The rout in the shares began last August after Teva badly missed second-quarter 2017 earnings and slashed its dividend by 75 percent.

The company issued a profit warning three months later and said it would slash its workforce by 14,000, or 25 percent. Making matters worse, Teva was saddled with $35 billion debt from its $40.5 billion purchase in 2016 of Allergan’s generic drug business Actavis, forcing it to sell assets.

One silver lining for Teva has been the launch of only one copycat of Copaxone by Mylan since Momenta has yet to market its 40 mg version, Kreizman said.

Another bright spot could be the slowing in the decline of U.S. generic drug prices, according to report from Credit Suisse, citing data from health information company IQVIA. It said prices were falling 6-8 percent a month so far in 2018, versus 8-11 percent a month last year.

Kreizman rates Teva “underweight” with a $16 target. But “any improvement in the U.S. pricing dynamics would have a pretty positive and fast impact on Teva,” he added. 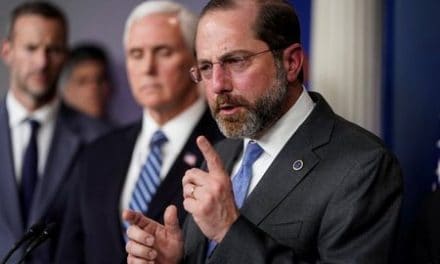 U.S. assails WHO ‘failure’ in pandemic, saying it cost ‘many lives’