SeptiCyte: Is It Ready for Prime-Time?

The following was originally posted by PW blogger Jasmine Marcelin, MD, to the University of Nebraska Medical Center Division of Infectious Diseases blog.

The following is a summary of a recent ID Journal Club, presented and written by 2nd year ID Fellow Dr. Raj Karnatak:

Sepsis defined as “life-threatening organ dysfunction due to the dysregulated host response to an infection” [1]. Sepsis most commonly results from a bacterial infection, or less frequently from a fungal or viral infection. Sepsis is the most expensive condition treated in US hospitals with an aggregate cost of 23.7 billion US dollars annually [2]. The global burden of sepsis is estimated to be up to 30 million people every year, causing up to 6 million deaths [3]. The Surviving Sepsis campaignrecommend administration of effective antimicrobial therapy within one hour of identification of sepsis. Unfortunately, signs and symptoms of sepsis are non-specific, and early identification of sepsis remains to be a challenge. 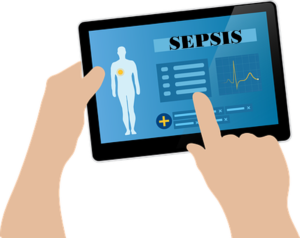 A delay in the administration of effective antimicrobial therapy can lead to significantly increased mortality [4]. Due to the rapid progression to life-threatening organ dysfunction or death, antimicrobials are liberally administered in all suspected cases of sepsis. Unfortunately, this practice may contribute to the development of antimicrobial resistance. The Centers for Disease Control and Prevention (CDC) estimate at least 2 million people get an antibiotic-resistant bacterial infection each year and lead to a minimum 23,000 deaths. Unfortunately, traditional culture methods to identify micro-organisms are time-consuming and are not as helpful in the early identification of sepsis. Most recently, significant strides have been made with newer rapid diagnostic methods, but early and accurate identification of sepsis remains challenging.

A recent study published in the American Journal of Respiratory and Critical Care “Validation of a Host Response Assay, SeptiCyte LAB, for Discriminating Sepsis from Systemic Inflammatory Response Syndrome in the ICU” used a novel method for the early identification of sepsis [5]. The SeptiCyte lab is a host response assay that quantifies expression of 4 major genes (CEACAM4, LAMP1, PLAC8, PLA2G7) for the early identification of sepsis. This article combined findings obtained from 3 prospective observational studies and included a total of 447 patients from 7 sites in the United States and one site in the Netherlands. The primary objective of this study was to establish performances of the SeptiCyte test for the correct identification of sepsis from a non-infectious SIRS either as a stand-alone test or in combination with other clinical variables. The investigators used real-time, reverse-transcription, quantitative polymerase chain reaction (RT-qPCR) to measure sepsis gene expression after the extraction of mRNA from blood samples obtained from patients with suspected sepsis. After extraction of m-RNA, RT-qPCR provided a quantitative score (SeptiCyte score). In this study, the binary cutoff value for SeptiCyte score was 3.1: a value 3.1 or above was consistent with sepsis and a score of less than 3.1 was designated as non-infectious SIRS (systemic inflammatory syndrome).

The SeptiCyte test was evaluated in three different sepsis physician diagnosis groups (unanimous, consensus and forced).  The ability of the Septicyte test to differentiate between sepsis and non-infectious SIRS was compared with other clinical variables such as procalcitonin, WBC count, mean arterial pressure, core temperature, and number of other SIRS criteria. Interestingly, SeptiCyte was found to be most accurate in differentiating between sepsis and non-infectious SIRS. SeptiCyte showed highest area under the receiver-operator curve (AUC), between 0.82 to 0.89.  The procalcitonin AUC was 0.80 and AUC for other individual variables fell below 0.67. Notably, SeptiCyte correctly identified 100% of blood culture positive sepsis cases. The diagnostic performance of SeptiCyte only slightly increased in combination with procalcitonin. Combination of other clinical variables did not add up to further increase in AUC.

Although this study showed SeptiCyte could accurately differentiate between infectious and non-infectious causes of SIRS, the assay has several weaknesses. First, the SeptiCyte assay took 6 hours to result, so it would likely not be more useful in sepsis identification than some newer and emerging rapid diagnostic tests; therefore the cost-effectiveness to clinical utility balance is yet to be determined. Additionally, the study included patients with SIRS and only included patients already in the ICU, when the emergency department may be the first point of initiation of any institutional sepsis protocol.  Finally, the test performance was lowest with pneumonia, which is one of the the most common causes of sepsis in the ICU, again questioning the clinical utility. Other questions remain such as whether this technology would have a role in out-of-hospital sepsis bundle initiation.

The SeptiCyte assay was approved by FDA in Feb 2017 as an indication for sepsis diagnosis in ICU patients, and efforts are being made to reduce test result time within 90 minutes. It will be interesting to see how SeptiCyte performance compares with other new and emerging rapid diagnostic tests to identify micro-organism directly from a blood samples.

Cost-effectiveness of post-treatment follow-up examinations and secondary prevention of tuberculosis in a high-incidence setting: a model-based analysis.