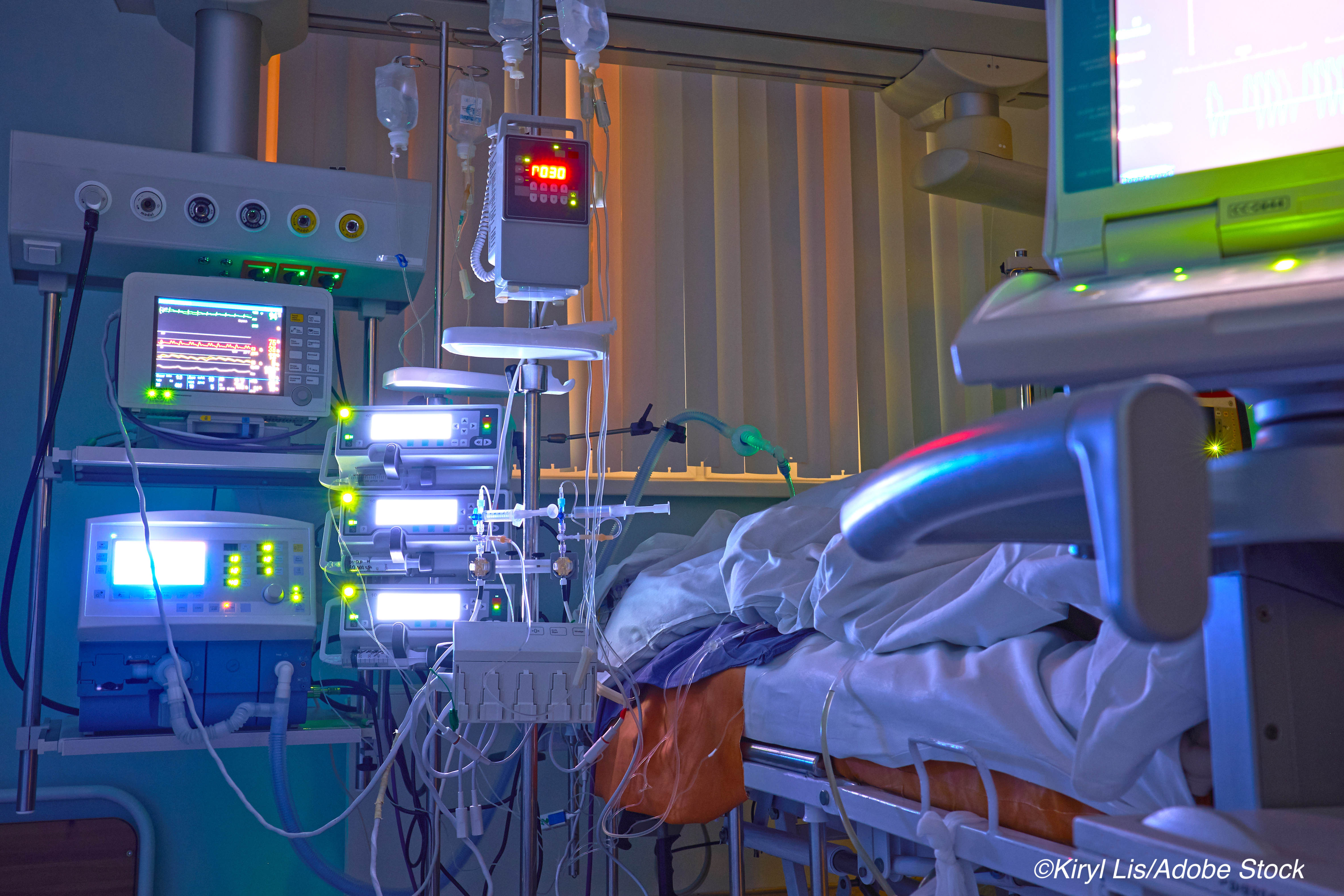 Critically ill patients on mechanical ventilation who were at risk for alcohol withdrawal syndrome (AWS) had fewer agitation-related events with high-dose baclofen than placebo, a prophylactic treatment trial showed.

However, the effect size was modest and the baclofen group had longer median length of mechanical ventilation (9 versus 8 days) and longer ICU stay (14 versus 11 days) compared with the placebo group, reported Karim Asehnoune, MD, PhD, of D, CHU deNantes in France, and co-authors in JAMA.

“The deeper sedation experienced by patients randomized to receive baclofen compared with placebo may explain both the statistically significant decrease in the primary outcome of at least one agitation-related event and the significant increase in the prespecified secondary end points of duration of mechanical ventilation and of ICU stay,” Asehnoune and colleagues wrote.

The phase III BACLOREA study included patients from 18 French ICUs receiving mechanical ventilation who met criteria for unhealthy alcohol use between June 2016 and February 2018. The primary endpoint, percentage of patients with one or more agitation-related event during a one-day treatment period, was 19.7% in the baclofen group and 29.7% in the placebo group (difference −9.93%, 95% CI −19.45% to −0.42%). No difference was seen in 28-day mortality for the baclofen (25.3%) versus placebo (21.6%) groups.

“Considering the modest effect and the totality of findings for the secondary end points and adverse events, further research is needed to determine the possible role of baclofen in this setting and to potentially optimize dosing,” the researchers wrote.

“Because baclofen use was associated with longer time receiving mechanical ventilation and longer ICU stay, it may be more useful as a titrated adjunctive agent when more established treatments fail rather than as a firstline therapy,” observed Michael Reade, MBBS, DPhil, of the University of Queensland in Brisbane, Australia, in an accompanying editorial.

“Until several important remaining questions are answered, the authors’ following conclusion is sound: ’further research is needed to determine the possible role of baclofen in this setting,’” he added.

In chronic alcohol users with down-regulated GABA-A receptors, abstinence causes a hyperexcitable state that may become symptomatic within hours, leading to anxiety, sympathetic activity, and in severe cases, psychosis and seizure. A 2013 review found AWS rates in ICU patients ranged from less than 1% for all patients to 60% for high-risk alcohol dependent patients with prior history of AWS.

Agents used to treat AWS symptoms include benzodiazepines and propofol (both GABA-A agonists) and dexmedetomidine (an α-2 agonist).

Baclofen is a GABA-B agonist approved for muscle spasticity, but a 2017 review found that no conclusions could be drawn regarding its efficacy and safety in treatment of AWS due to insufficient and very low quality evidence. The hypothesized mechanism involves inhibition of GABA-B–mediated alcohol stimulated dopamine release in the amygdala.

Whether treatment is prophylactic or symptom-driven may make a difference. “Most guidelines for care in the ICU and elsewhere emphasize treatment over prophylaxis and require the development of specific symptoms and signs of alcohol withdrawal before medication administration,” the editorialist noted. “In the ICU context, this approach results in quicker symptom control, lower dose administered, and shorter sedative infusions compared with prophylactic administration, along with shorter length of ICU stay.”

Asehnoune and colleagues included adults (mean age 57, 17.2% women) expected to require mechanical ventilation for 24 hours or more who met criteria for unhealthy alcohol use, which was defined as the consumption of 14 units per week for men, or 7 for women or men older than 65. A unit corresponded to 12 ounces of beer, 5 ounces of wine, or 1.5 ounces of 80-proof liquor.

On day one, patients were given baclofen (n=159) or placebo (n=155), adjusted from 50 to 150 mg per day based on estimated glomerular filtration rate and continued in three divided doses daily until day 15 or extubation and discontinuation. All patients were treated per local protocol or practice to maintain Richmond Agitation Sedation Scale score of −2 to +1 (light sedation).

Agitation-related events were defined as unplanned extubation, pulling out lines, catheters, or drains, falling out of bed, leaving against physician advice or without being seen, immobilization device removal, and aggression toward self or medical staff.

Discontinuation of the study drug due to delayed awakening occurred in 14 (8.9%) participants receiving baclofen and three (1.9%) receiving placebo.

“Although 75% of recruited patients reportedly drank at least four drinks per day, many may have been at low risk of AWS,” Reade noted, pointing out that “post hoc analysis provides some evidence that patients with the highest antecedent alcohol consumption had the greatest reduction in agitation with baclofen.”

Less prolonged sedation may occur with the use of a lower dose of baclofen or with the initiation and titration of baclofen only when signs of alcohol withdrawal appear, he added.

Limitations of the study include enrollment of predominantly middle-aged men, which may limit generalizability. “Because baclofen is a γ-aminobutyric acid agonist there is the possibility that it may increase delirium in critically ill patients, although a causal association has not been established,” the researchers added.

The BACLOREA study was supported by the French Ministry of Health. Nantes University Hospital sponsored the study.

Reade reported receiving grants from the Australian National Health and Medical Research Council and the Medical Research Future Fund and funding from Pfizer to speak at a conference related to clinical trials of dexmedetomidine.