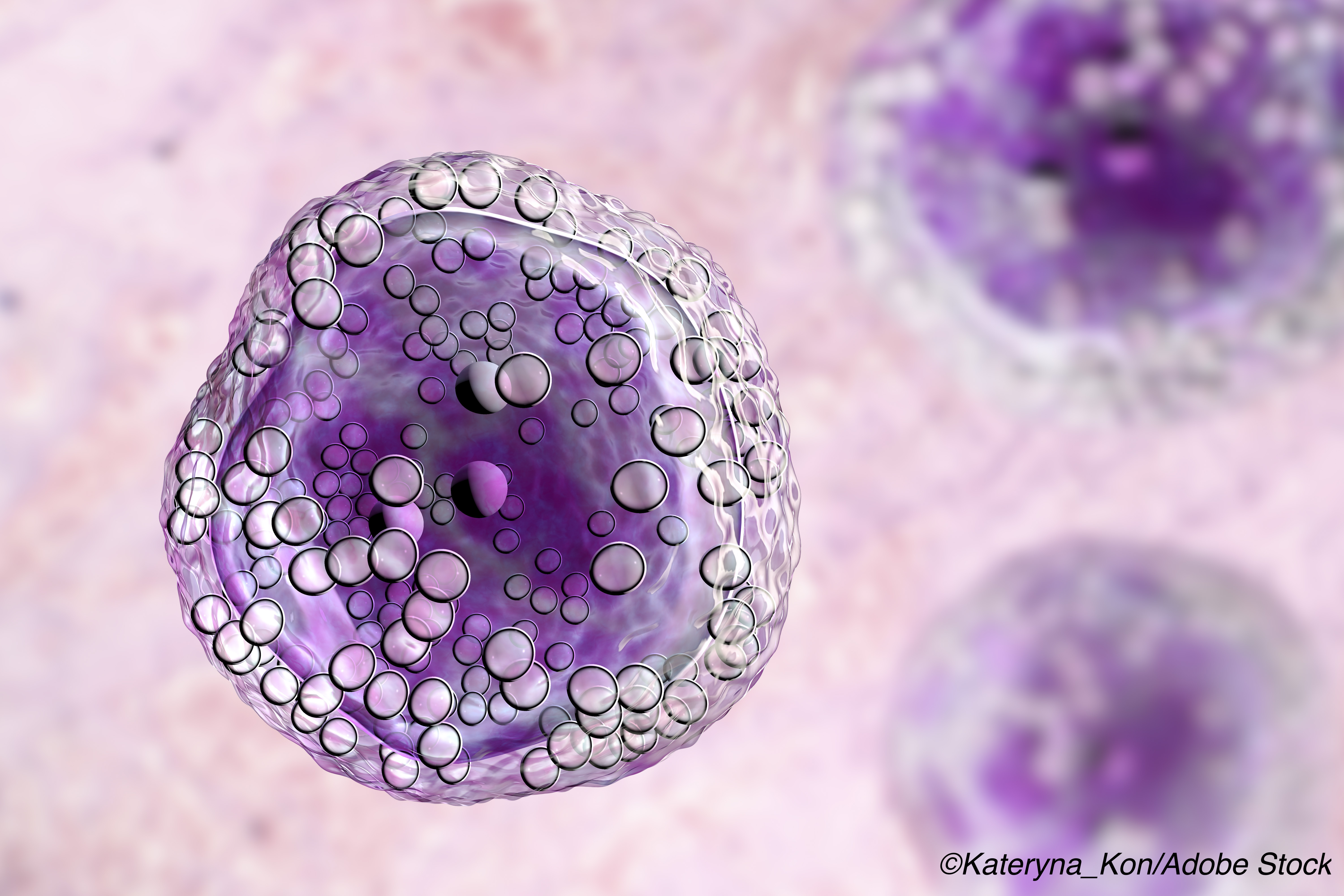 The use of CD19-directed chimeric antigen receptor (CAR) T-cell therapy for the treatment of relapsed or refractory diffuse large B-cell lymphomas (DLBCL) has been one of the more exceptional success stories in the advancement of cancer treatment, according to a number of studies.

However, its success requires considerable finesse, as challenging adverse events (AEs) can occur with treatment, most notably the cytokine release syndrome (CRS) — the same syndrome that patients with Covid-19 infection can develop when the infection is severe.

“Previously, patients with lymphomas who had stopped responding to chemotherapy had only a 6% chance of having a complete response (CR) to an additional cancer therapy and a predicted life expectancy of approximately 6 months,” he added.

Now, the same chemotherapy-refractory patients treated with one CAR T-cell product — the still investigational lisocabtagene maraleucel or liso-cel — had an over 50% chance of achieving a CR, and close to 60% of them were alive 1 year after treatment, as Abramson also pointed out.

There are significant differences between the 3 major CAR T-cell products, though all 3 products are capable of producing durable remissions in a significant proportion of patients with relapsed/refractory diffuse large B-cell lymphomas.

“As a lymphoma specialist who has been caring exclusively for these patients for the last 15 years, I have never seen anything else like it,” Abramson reaffirmed.

“And I predict CAR- T-cells… will expand into the standard armamentarium for many other B-cell lymphomas, including follicular lymphoma and chronic lymphocytic leukemia, among others,” he said.

So far, studies of these 3 different products certainly support these claims.

For example, in the TRANSCENT NHL 001 study of the investigational CAR T-cell therapy liso-cel, an objective response was achieved in 73% (95% CI, 66.8-78.0%) of 256 evaluable patients treated with the product at the recommended target dose of 100 x 106 CAR T cells, as Abramson and colleagues reported in the Lancet.

For the procedure, patients underwent leukapheresis to collect autologous peripheral blood mononuclear cells in order to manufacture liso-cel, and these cells were then administered as a sequential infusion of 2 components — CD8 and CD4 CAR T cells at equal target doses.

Unlike most cancer therapies, which need to be given as repeated treatments over time, CAR T-cells are given as a single, one-time infusion, after which — like a living drug — they grow and reproduce to continue their attack against cancer cells.

These responses were gained with unexpectedly little toxicity, grade 3 or worse CRS occurring in only 2% of patients and neurological events in only 10% of the group overall.

As Abramson explained, when CAR T-cells recognize the tumor cells they have been designed to attack, they suddenly expand and lead to broad activation of the immune system.

The activated immune system releases cytokines into the circulation, and this sudden release can cause the so-called CRS, resulting in fever, decreased oxygen levels, low blood pressure, or injury to other organs.

The primary strategies that appear to be most effective at treating CRS are the early use of treatments such as the interleukin-6 (IL-6) receptor antibody tocilizumab, which blunts CRS and prevents progression to a more severe crisis.

In the TRANSCEND study, 20% of patients who developed CRS were managed with tocilizumab, corticosteroids, or both, while 10% received tocilizumab alone.

Median progression-free survival (PFS) in the study was 6.8 months (95% CI, 3.3-14.1 months) but was actually not reached among patients who achieved a CR after a median follow-up of 12.3 months.

“Findings of the TRANSCEND trial show that liso-cel can lead to rapid and durable remission, with low incidence of all-grade and severe cytokine release syndrome and neurological events among patients with high-risk aggressive relapsed or refractory large B-cell lymphoma,” the authors observed.

“Clinically meaningful activity was noted across populations with unmet medical need, including uncommon histological subtypes and patients with characteristics of poor prognosis,” they concluded.

One of the 2 CAR T-cell products already approved to treat B-cell malignancies is axi-cel.

In the ZUMA-1 trial evaluating axi-cel, patients with relapsed or refractory large B-cell lymphoma had a high rate of durable response rates, and the safety profile was deemed manageable by investigators. However, as the authors also emphasized, some 60% of patients treated with CAR T-cell therapy either do not respond to treatment initially or relapse within 2 years of treatment.

“Significantly higher prior levels of serum ferritin were [also] observed at most time points after CAR T-cell infusion in patients who relapsed or had no response compared with those who had durable responses,” researchers added.

Thus, tumor burden and markers of systemic inflammation prior to receiving therapy were both negatively associated with rates of durable responses, they noted.

Researchers also showed that the number of infused CD8 T cells normalized to tumor burden was “strongly associated” with both expansion of CAR T cells and durable responses to treatment.

“Indeed, in patients with high TB, but not patients with low TB, those who achieved durable responses showed a significantly higher number of infused CD8 T cells compared with patients who responded and then relapsed,” investigators pointed out.

Product T-cell fitness and the dose of CD8, as well as CCR7+ and CD45RA+ T-cells, were similarly associated with response.

“In this study, the strongest correlate of durable response was peak CAR T-cell levels in blood normalized to pretreatment TB,” Locke and colleagues emphasized.

As pointed out by Stephen Schuster, MD, University of Pennsylvania, Philadelphia, and colleagues, clinical trials of the different CAR T-cell products have not yet been aligned on CRS grading scales or management algorithms.

In a retrospective review of the phase 2, single-arm, JULIET trial, in which the safety of tisagenlecleucel was evaluated in patients with relapsed or refractory DLBCL, 58% of a total of 111 patients experienced the CRS according to the Penn scale, and these patients were candidates for regrading using both the Lee scale and ASTCT criteria.

When it came to grade 3 or 4 CRS, the numbers were again roughly similar, with 22% of patients on the Penn scale, 17% on the Lee scale, and 14% on ASTCT criteria being categorized as having grade 3 or 4 CRS.

Of those who developed CRS in the JULIET trial, between 10.8% and 14.4% received tocilizumab depending on which scale was used.

“[A]chieving widespread use of a single set of consensus criteria, as proposed by the ASTCT, will allow a more uniform approach to managing CRS events in the real world,” they suggested.

The TRANSCEND NHL 001 trial was funded by Juno Therapeutics, a Bristol-Myers Squibb company.

The Locke et al study was funded by Kite.

Support for medical writing for the Schuster et al study was provided by Novartis Pharmaceuticals.

Locke reported that he has served in scientific advisory roles for Novartis, Celgene/Bristol-Myers Squibb, Kite/Gilead, GammaDelta Therapeutics, Calibr, Amgen, Wugen, and Allogene as well as a consultant with grant options for Cellular Biomedicine Group. He has also received research funding from Kite/Gilead.