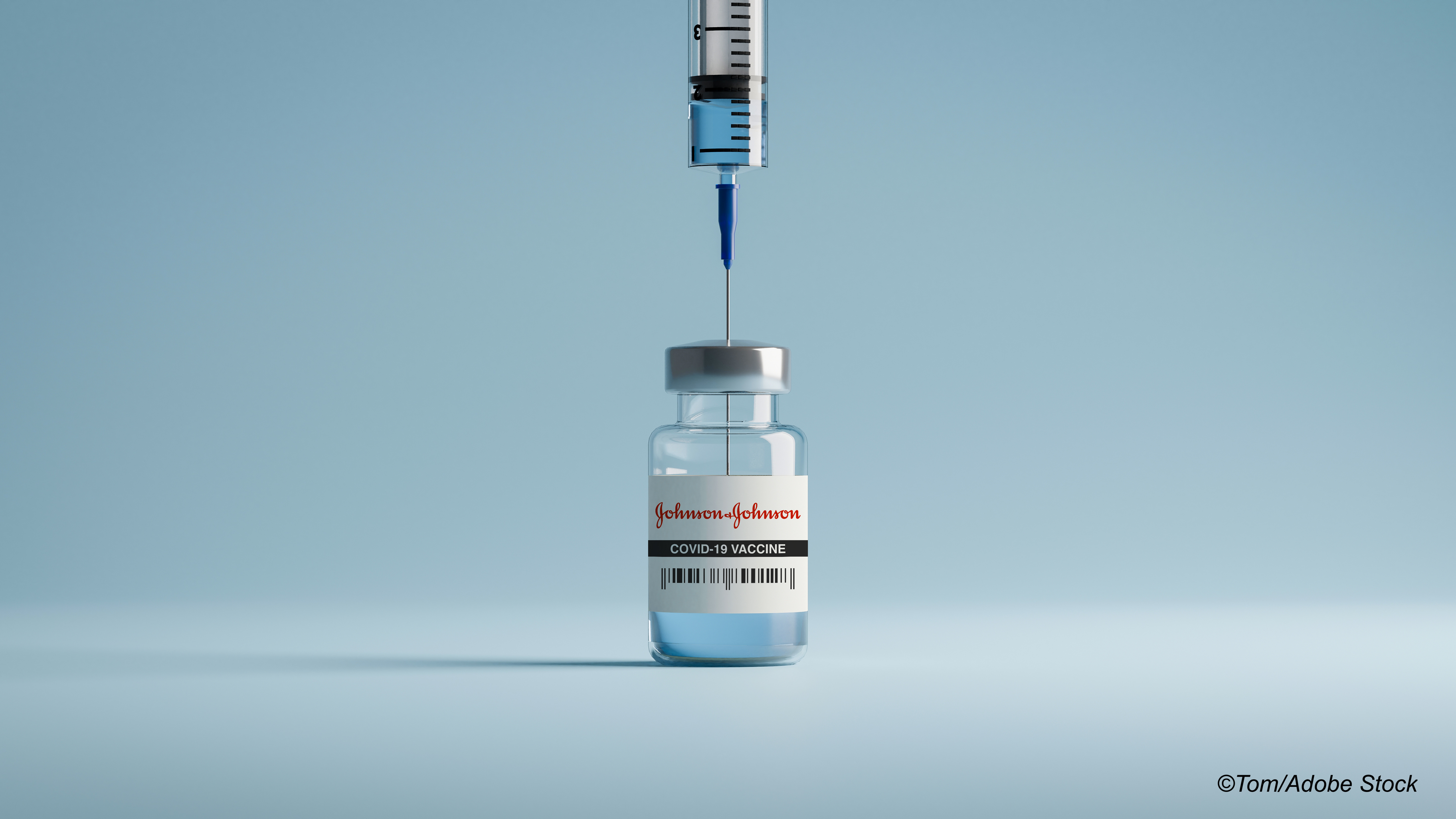 But second dose may be needed, experts conclude

The incidence rate ratio of infection in vaccinated versus unvaccinated participants was 0.26 (95% CI, 0.20-0.34), which corresponded to an effectiveness of 73.6%, which was consistent with the 66.9% efficacy reported for the Ad26.COV2.S vaccine against moderate-to-severe disease in the manufacturer’s phase III clinical trials.

The findings “highlight the effectiveness of the vaccine in a cohort in which the SARS-CoV-2 Alpha and Delta variants were the predominant circulating viruses in comparison with the original clinical trials,” wrote researcher Juan Corchado-Garcia, PhD, of the biomedical analysis software company nference Inc., Cambridge, Massachusetts, and colleagues.

The study, published online Nov. 2 in JAMA Network Open, compared outcomes among 8,889 people vaccinated with a single dose of the Ad26.COV2.S adenoviral vector vaccine between late-February and mid-July of this year against 88,898 unvaccinated controls matched for age, sex, race/ethnicity, zip code, and previous number of SARS-CoV-2 PCR tests.

The Delta variant was emergent in the final weeks of the study, and in an accompanying commentary, Zahra Rikhtegaran Tehrani, PhD, of the University of Maryland School of Medicine, and Mohammad Sajadi, MD, of the Baltimore Veterans Affairs Medical Center, both in Baltimore, argued that there were not enough cases in the study to determine vaccine efficacy against the Delta variant.

Sequencing information at the patient level was not available, so Corchado-Garcia and colleagues estimated the prevalence of Alpha and Delta variants using population-level prevalence data.

The commentary writers noted that several recent studies, including one from the U.S. CDC, found the Ad26.COV2.S vaccine to be less effective against the Delta variant than the currently authorized mRNA two-shot vaccines.

In the CDC study, across all ages, vaccine effectiveness was found to be significantly higher among mRNA-1273 vaccine recipients (95%) than among BNt162b2 (80%) or Ad26.COV2.S (60%) vaccine recipients at a time when the Delta variant was prominent (June through August, 2021).

“What is becoming more clear with time is that the single-dose regimen of Ad26.COV2.S vaccine seems to be inferior to the mRNA-based vaccines in terms of vaccine effectiveness,” Tehrani and Sajadi wrote. “Based on the recent findings of Corchado-Garcia et al, as well as a growing body of literature, it appears that the single-dose Ad26.COV2.S vaccine, although providing protection against infection and serious disease in most recipients, still has room for improvement.”

They concluded that this may mean a second dose of the Ad26.COV2.S vaccine—which was shown in a recent study by the manufacturer to increase vaccine efficacy against moderate to severe Covid-19 to over 90%—will be needed, or a second dose with an mRNA vaccine.

The study by Corchado-Garcia and colleagues included 8,889 participants who received the Ad26.COV2.S vaccine between Feb. 27 and July 22, 2021, and 88,898 unvaccinated controls. All participants were members of the Mayo Clinic Health System, which serves clients in Minnesota, Arizona, Florida, Wisconsin, and Iowa. During this period in the U.S., “the pandemic entered a new phase characterized by a flattening in the number of cases due to the massive campaign for vaccination and the expansion of new SARS-CoV-2 variants,” the researchers wrote.

They noted that following FDA emergency use authorization of the Ad26.COV2.S vaccine in late February 2021, more than 21 million doses of the vaccine were administered in the U.S.

Examination of the severe Covid-19 composite outcome of hospitalization, ICU admission, and death showed vaccination to be associated with significant reductions in these events (odds ratio, 0.33, 95% CI, 0.19-0.65; P<0.001).

“Our analysis showed a reduction in severe cases, in particular for risks of hospitalization (and trends for reducing the risk of ICU admission and mortality),” the researchers wrote. “However, because only 60 individuals tested positive for SARS-CoV-2 after receiving the Ad26.COV2.S vaccine, our study was underpowered for definitive assessment of mortality. As the vaccine is administered to more patients, we will continue to assess the rates of hospitalization, ICU admission and mortality among individuals who become infected after Ad26.COV2.S vaccination.”

Study limitations include the use of data from only a single health system, the small cohort size compared with previous studies of this and other vaccines, the lack of data on care received outside the Mayo Clinic system, and the approximation of the prevalence of alpha and Delta variants due to the lack of sequencing information at the patient level.

Corchado-Garcia reported receiving personal fees from and holding stock in nference Inc outside the submitted work.

Tehrani and Sajadi reported no disclosures.