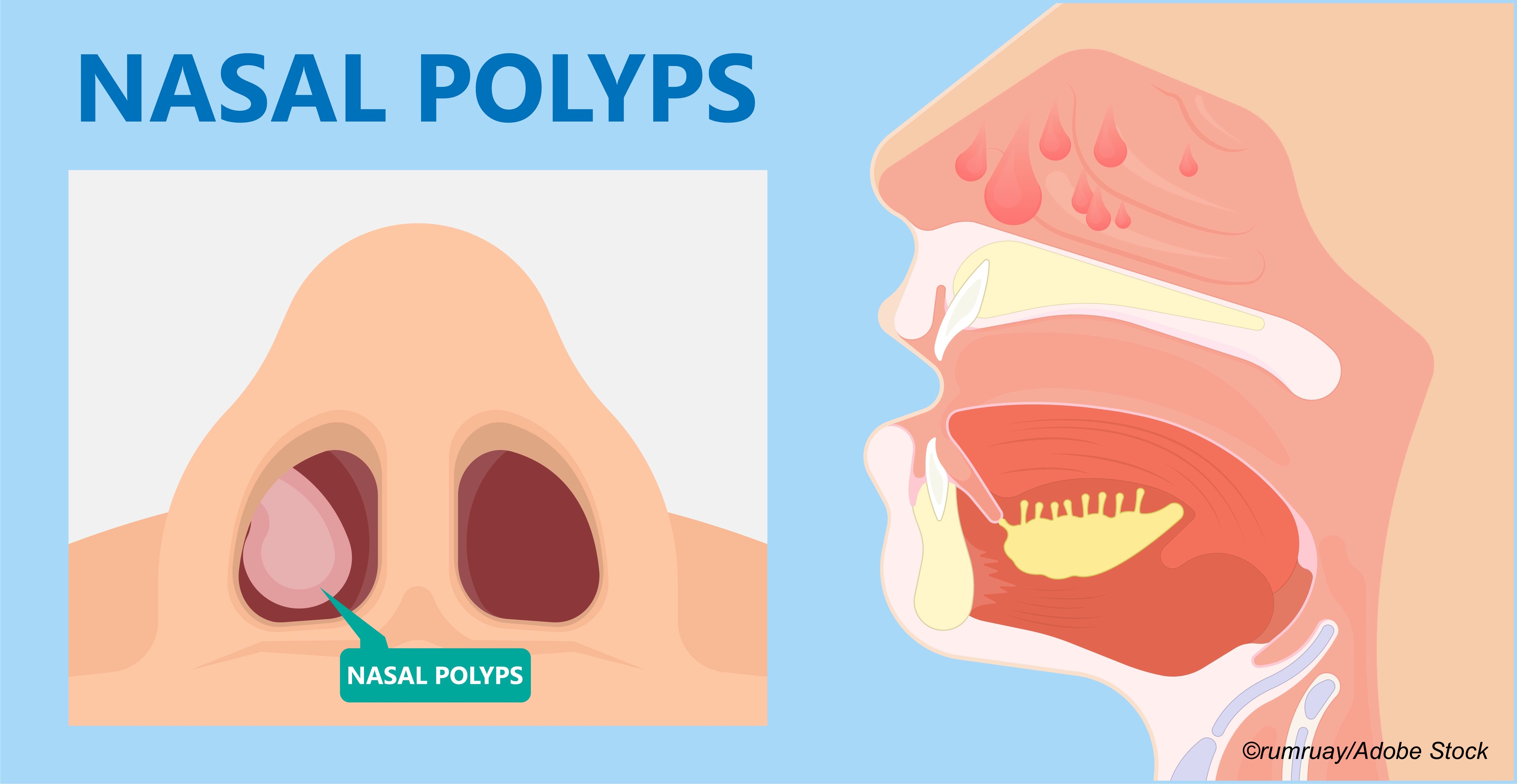 An exploratory analysis of data from the NAVIGATOR phase III trial shows the novel biologic tezepelumab to have significant efficacy in patients with severe asthma and nasal polyps.

Treatment with the biologic added to standard care was associated with an 86% reduction in the annualized asthma exacerbation rate (AAER) compared to placebo plus standard care in asthma patients with nasal polyps and a 52% reduction in AAER in asthma patients without polyps over 52 weeks, according to the study. In addition, tezepelumab was associated with clinically relevant improvements in nasal polyp symptoms compared to placebo at week 52, measured by the nasal outcome test SNOT-22.

The new NAVIGATOR trial data were presented Sept. 5 at the virtual meeting of the European Respiratory Society – ERS International Congress 2021.

Tezepelumab is a first-in-class biologic that targets the epithelial cytokine thymic stromal lymphopoietin (TSLP), which has been shown to play a key role in asthma-related inflammation.

In asthma patients, TSLP levels correlate with airway obstruction, disease severity and glucocorticoid resistance and they have also been shown to play a role in airway structural cell and immune cell interactions not exclusively driven by T2 inflammation.

In July of this year, the U.S. Food and Drug Administration accepted a Biologics License Application (BLA) and granted priority review status to the AstraZeneca/Amgen drug for the treatment of asthma largely based on previously reported NAVIGATOR findings.

The trial showed superiority for tezepelumab across every primary and key secondary endpoint compared to placebo in patients with uncontrolled asthma who were also being treated with medium- or high-dose inhaled corticosteroids (ICS) plus at least one additional controller medication with or without oral corticosteroids (OCS).

No clinically meaningful differences in safety were reported between the tezepelumab and placebo groups in the study.

Subsequent analyses of NAVIGATOR data have shown the drug to have efficacy in a broad population of asthma patients, including those with eczema.

NAVIGATOR principal investigator Andrew Menzies-Gow of Royal Bromptom Hospital, London, UK, noted in his video presentation to the ERS International Congress that nasal polypsis is primarily driven by type 2 inflammation and that roughly 70% of patients with nasal polyps have co-morbid asthma.

“And up to 22% of patients with severe asthma also have nasal polyps and this comorbidity can be associated with poor outcomes,” he said.

The NAVIGATOR study included 528 adult, non-smoking asthma patients randomized to treatment with either tezepelumab 210 mg (n=528) or placebo (n=531) given subcutaneously every 4 weeks for a year.

Among the 83 patients reporting nasal polyps within 2 years of randomization, 42 received the biologic and 41 received the placebo.

Among the main findings from the subgroup analysis:

Menzies-Gow noted that an phase 3 randomized, placebo-controlled trial is underway to assess the safety and efficacy of tezepelumab in patients with severe chronic rhinosinusitis with nasal polyps with and without co-morbid asthma.

The NAVIGATOR trial was funded by AstraZeneca and Amgen Inc.